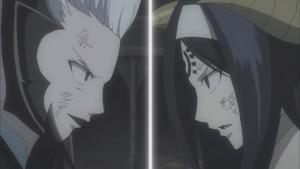 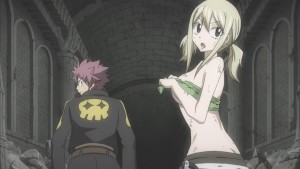 And so another string of the unexpected happens, as the Tartaros arc trudges on. There’s a pretty potent theme running throughout the events of this arc, almost repeating itself time and time again. At multiple points in the story, it seems like Fairy Tail finally has the upper hand, only for Tartaros to bring out another trump card that turns the tables, resetting the board largely in their favor. 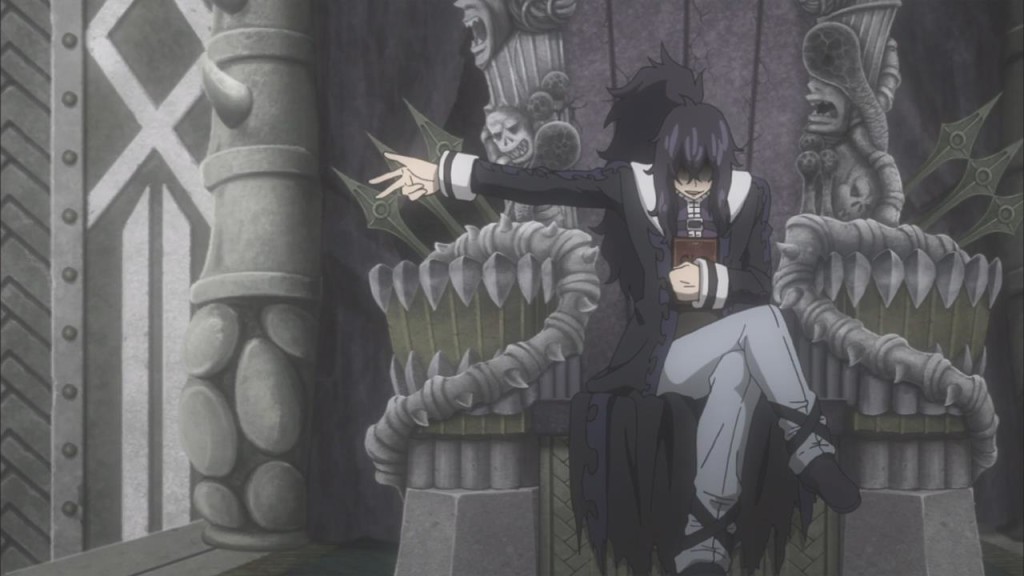 Not So Fast! You Activated My Trap Card!

This week’s events reminded me of another shounen anime that’s pretty unrelated to Fairy Tail, YuGiOh. If you know the card game battle anime, you know that there’s something that happens pretty often. The villain/enemy is about to defeat the main character. He has more life points, he has the advantage, an unbeatable strategy and is one move away from delivering the fatal blow, and then words appear: “Not so fast!” 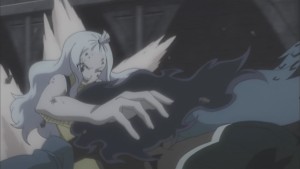 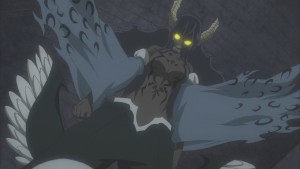 This week was another week where a prominent battle concluded. The star this time was very much Mirajane, as she took on Seliah, and edged out a victory, using her wit rather than her brawn.

There’s an interesting contrast here to Fairy Tail’s other S-Rank female Mage, Erza. Unlike what we’ve been led to believe, Mirajane isn’t quite like Erza, at least from what we’ve seen. While Erza manages to power her way through every situation with her fists and strength, Mirajane seems to rely on her tactics and wit to make it out of sticky situations. 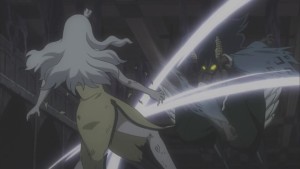 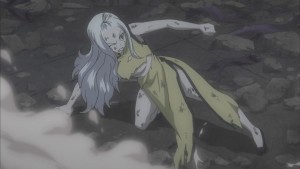 We’ve seen quite a few times already, but in nearly every arc, Mira has more or less been relegated to a supporting character rather than an active participant. Even so, the story (and Mashima-sensei) have long led us to believe that Erza and Mira are more or less equals. Yet… from this episode, I got the impression that Mira is clearly the weaker of the two.

And I won’t lie, that came as a bit of a disappointment, especially after how Mira had been dominating and acting all badass. If there’s a character that’s been crippled in this series, its been Mira. In earlier arcs she was crippled because of Lisanna’s loss and had lost her “bad” side, and there was just always some kind of excuse for us to not see her go all out. 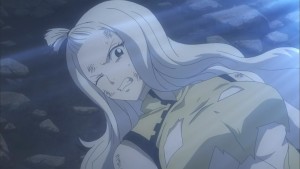 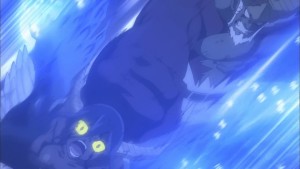 This time, we had none of that, and while Mira did dominate for a decent chunk of the battle, it was just heart breaking to see Mira finish of her battle by calling her muscle bound brother Elfman to land the final blow.

All it took was one punch too. ONE punch from Elfman for an opponent that the S-Rank Mira felt was too powerful. That was a letdown, ending the awesome battle on the whimper rather than a bang. 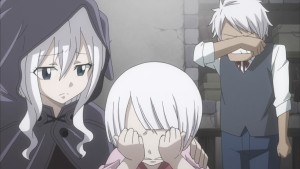 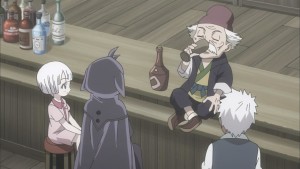 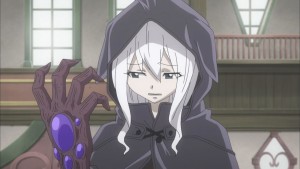 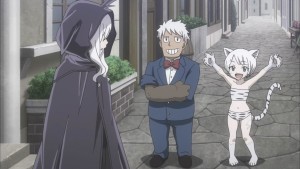 And don’t get me wrong, I understand where Mashima-sensei was coming from, and what he was going for. The flashback we saw this week, showed us that Mira’s power comes from her family.

In the past, its pretty clear that it was Mira’s two siblings that saved her from complete despair and gave her the confidence to accept her power. That was cool, I rather liked that little backstory. It gave Mira some good depth, and brought context to why she lost her strength when she thought Lisanna had died. 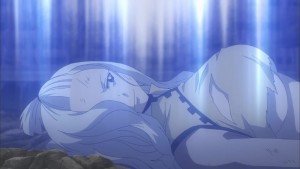 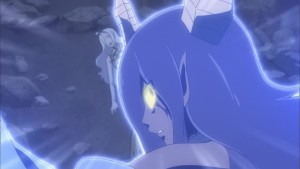 But… It still sucked that instead of her actually using her “Take-Over” power to attack Seliah in some unique and interesting way, all she did was take over her Macro power and order Elfman to finish the job.

And yes, part of what rubbed me the wrong way was that it was insulting to Elfman as well as Mirajane. For all the stupidity and lack of mental strength that Elfman has, he didn’t deserve that last attack. More than that, it reduces Elfman to nothing more than pile of brawn. It makes him into a tool, an extension that stands there to give Mira strength and be used by her when she’s in a serious pinch. 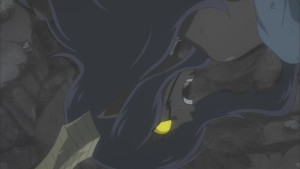 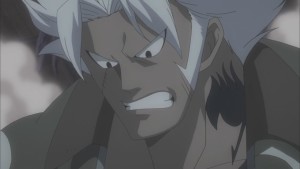 So yes, I didn’t dig how Mira’s fight wrapped up. I realize that it sounds like I’m being rather down on the fight itself, when I’m not. Its just that the conclusion kinda reduced all that epicness down to something unpalatable. For all the sharp and quick thinking that Mirajane used on the spot, I just wish it hadn’t gone down the way it had.

Am I a bit biased in this? Probably, but that’s how I felt about that scene. I guess I just expected more from Mirajane, especially given that we’d seen her nasty, rebelious teenager side in the past. 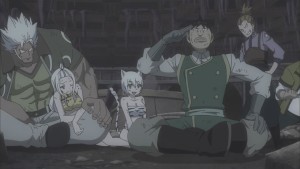 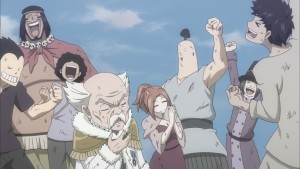 But, regardless of how it ended, Mirajane/Elfman took down Seliah. With Seliah, Franmalth, Ezel all done for, The revival Lab destroyed and Face having been stopped, Fairy Tail seemed to be cleaning up pretty good.

Enter Mard Geer, the king of underworld. We got a slight look at Mard Geer last week, and I wondered if he was actually the leader of Tartaros, or someone manipulating things from the shadows. Given his interactions with Kyouka, it seems he’s pretty much the head honcho, second only to END himself. 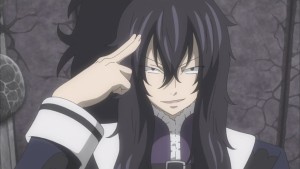 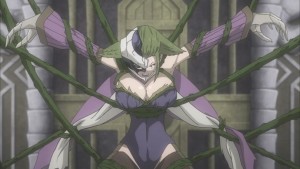 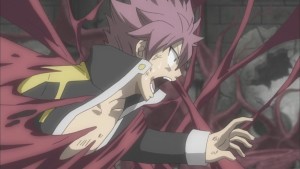 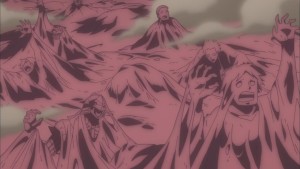 And it seems like he’s got quite a bit of power, and in one fell swoop, he not only punishes Kyouka for “playing with the humans” but turns the Tartaros cube into an instant death trap.

The outcome is pretty surprising too, as almost none of Fairy Tail escapes the “Alegria” curse, with all of them being assimilated into the cube’s walls, as they come alive. The only one to survive? Lucy Heartfilia. 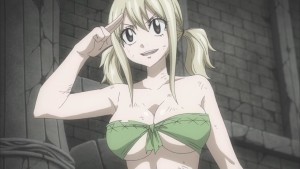 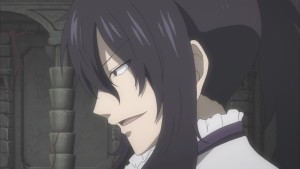 Oh man! If you thought that Wendy taking on a member of Tartaros and stopping face was too much, well then… Just imagine how screwed Fairy Tail is right now. Lucy is many things, but she’s hardly the strongest Mage in Fairy Tail. But that’s all they have now. All that’s left between Fairy Tail and annihilation is one Celestial Mage.

To say this change of circumstances has me excited, is putting it mildly. I think for all the complaints I’ve had about Mira or Gray in this series, Lucy has constantly had character and power growth that’s been great to see. Much like Wendy, Lucy is the kind of character that seemed like nothing more than a supporting cast member, someone who stood on the sidelines and tried to survive while Natsu and the rest did the heavy lifting. 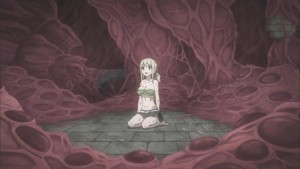 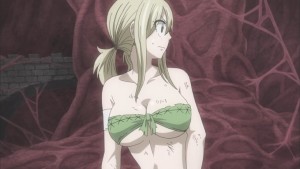 Well… Now its Lucy’s time. I have full faith in Lucy pulling through this, and saving Fairy Tail but I also know that much like Laxus and Wendy, its going to take everything she has, and its not going to be pretty. Next week can’t get here soon enough. 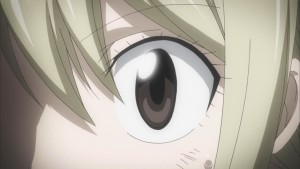 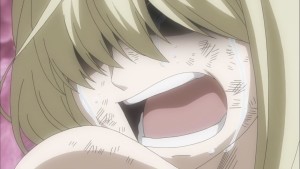 Now, I realize that the preview is showing a decent bit, but I still have no idea what’s actually going to happen, so I’m kinda really intrigued to see what we get next week.