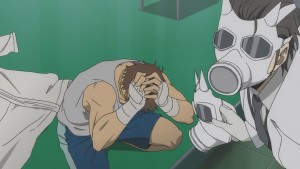 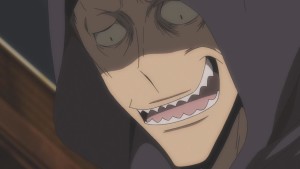 Was that a Hail Mary? Because man does it feel like Durarara!!x2 saved itself at the last minute there. Its no stretch to say that Durarara!!x2’s second cour has long endangered the entire series, positioning it as a completely mediocre mess. Thankfully things changed for the better this week. In a welcome shift, everything moved away from the more uninteresting characters to the characters that the audience not only cares about, but has been asking for, for a while. 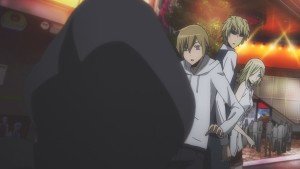 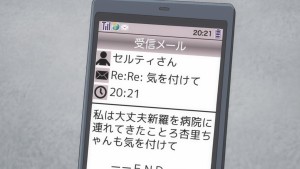 The whole stalker plot-line revealed its true point this week, as it served more as a launching off point for the large cast of characters to all converge, and setup all the upcoming conflicts.

The first thing that made this episode infinitely better was the focus on Mikado. You could more or less call this a Mikado episode if you were going by old Durarara!! standards, yet there was a markedly different tone to it all. 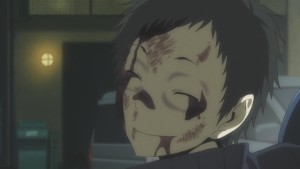 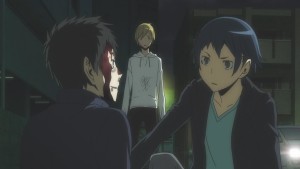 For one thing, I have to say I’m liking Yami(Dark) Mikado, if you can call him that. The twisted, happy go lucky Mikado that’s trying to create a world where his friends can happily live with him is a chilling and odd transformation that may as well be Duraraa!!x2’s crowning achievement. And for all the times Mikado’s been a whimp, way in over his head, it was darn awesome to see him throw oil on Ruri’s stalker and set him ablaze.

To top it all off, this all happened with Kida in the front row seat. Poor Kida, he came back to Ikebukuro to try and save Mikado from the mysterious element in the Dollars, only to learn it was Mikado himself. And understandably, Kida’s reaction to this was to try and stop his friend from going down the wrong path. I mean, who wouldn’t be a little unnerved by Mikado’s transformation? People like Anri and Kadota, who’re in the dark, have been more or less getting the creepy vibes, but Kida saw it all. 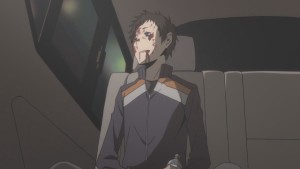 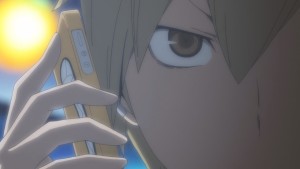 In reaction to all of this, it seems like Kida’s going to get the yellow scarves together again. It seems like whatever Kida is planning, its going to be amassing his army to potentially tussle with Mikado. And while its tragic that two best friends are going to become enemies, trying to outmaneuver each other, that dynamic just sounds… deliciously exciting. Even more so, its just so odd that Kida’s the sensible one this time, with a twisted Mikado at the reins, causing havoc.

And just in case you thought that Mikado wasn’t entirely off the deep end or out of his depth, he very much decides to leave his house in case Kida were to make his “move”. So Kida and Mikado are pretty much at opposite ends of this whole conflict, but where does that leave Anri? 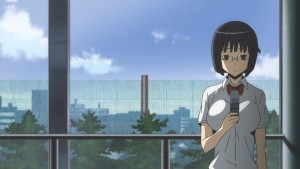 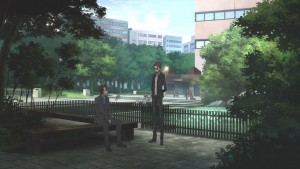 Sadly, Anri is in a place of complete ignorance, because neither of her two friends has told her anything. Well, one of those friends is someone she’s interested in? Possibly? The little bit with Akabayashi at the end seems to indicate so, but I always thought that Mikado was the one interested in Anri without reciprocation. I guess we’ll see where Anri falls in all of this once it all comes out in the open.

What is worrying though, is that for all of Mikado’s cloak and dagger, it seems like a decent amount of people know what he’s doing. There’s Akabayashi and the Yakuza, who are pretty much all in the loop. But there’s other players, one of which is Orihara Izaya. 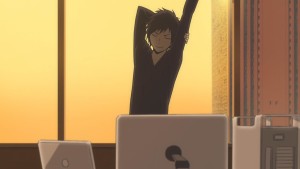 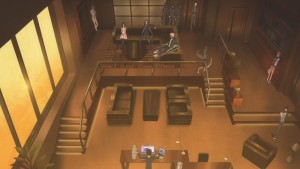 Izaya made his return to the power play in Ikebukuro in a big way this week. In some ways, it felt like he came back from some kind of vacation, completely energized, and back to his despicable ways from season 2. In contrast to Mikado’s little force, and whatever it is that Kida’s amassing, Izaya has quite the team of misfits as part of his little group in the Dollars.

The stalker, the three Dragon Riders, the little girl that tried to kill him, another girl possessed by Saika, Sloan, the bald reporter from waay back, some new guy in dark glasses and last and strangely, the sister of the Martial Arts Dojo guy (who we still don’t have a name for). 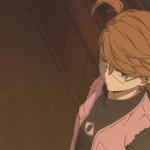 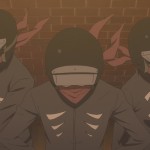 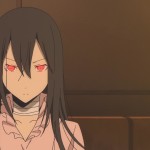 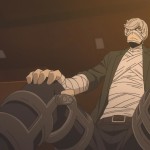 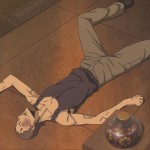 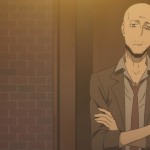 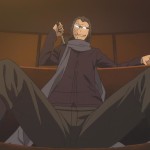 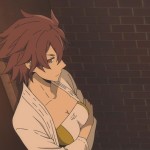 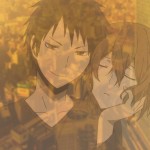 The significance of Izaya’s actions is pretty clear, he’s directly in opposition to Mikado’s purge of the Dollars. Given Izaya’s personality, it makes a lot of sense too, since he claims he loves all humans equally, regardless of how twisted or good of a person they are. And with Izaya, the whole Dollars dynamic gets even more muddier.

Izaya vs Mikado? If you had told me about that a cour ago, I would’ve started making funeral preparations for Mikado but… Mikado is hardly who he used to be. The new Mikado is not only more ruthless, but he’s also kind of like a big brother as far as the dollars go, being able to spy on anything that goes on on that site. 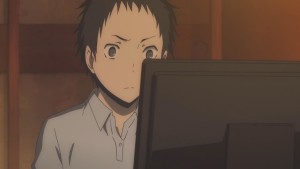 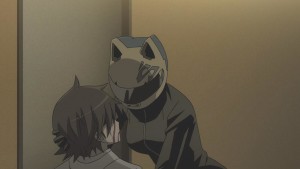 Its via his new powers of information control, that Mikado is able to alert Celty to Shinra’s injuries. With Shinra out of the picture, in some ways, it seems like Celty is benched for a while too. Celty is actually one of those people that actually keeps things in check and in control. If there are specifically “good” people, then Celty’s one of the few that fits into that role. Now that she’s off the board, at least for a little while, it’ll be interesting to see how things pan out.

And of course, beyond all these groups, there’s a fourthentity, Yodogiri Jinai. What I like from Jinai is that while he’s definitely devious, and probably more or less pure evil as opposed to Izaya’s Chaotic evil, he’s not like Izaya. Jinai very much seems like he’s playing the game from afar and doesn’t get quite personally involved like Izaya. His motivations are money after all, and it seems like the fat cat that also has had dealings with Shinra’s dad in past episodes, is the actual interested party in all these supernatural beings floating around Ikebukuro. 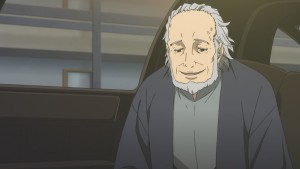 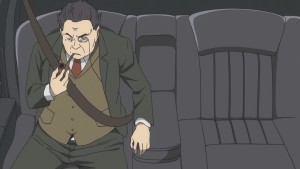 The rest of the characters in the cast are more or less wild cards for now. What sides they end up taking in this messed up battle royal between Mikado, Izaya, Kida and Jinai remains to be seen. And with these 19 episodes, Durarara!!x2 has finally put everything in motion for a satisfying end game.

Was it elegant? No not really. To be honest, it was a bit of a slog to get here and a lot of people have actually long left the series at this point. I’m still a bit skeptic actually, since Durarara!!x2 has done great setup before, and its delivery based on that setup has been hit or miss. 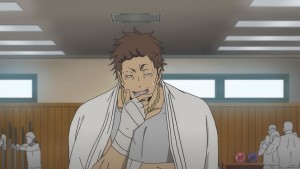 Having said all of that though, it does feel like Durarara!!x2 is gearing up for something interesting, and has my undivided attention again. The question is, does it continue to build up the momentum until this cour’s conclusion or does it peter out again near the end, leaving us in unknown territory for the third and final cour? I suppose we’ll know come next week. 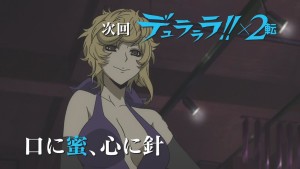 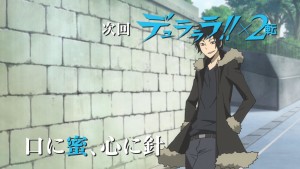 Seems like Izaya’s on the move again next week, and since he’s not confined to a hospital bed, things are looking up.