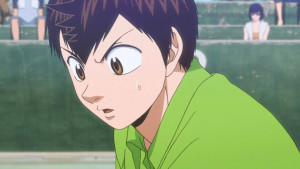 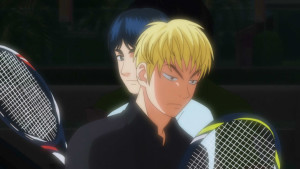 Well if anyone doubted that they’d dislike Takagi….this episode basically confirmed it. Just the kind of guy that annoys the heck out of you. I can sympathize with feeling like you can’t win and being stuck behind a mountain. Nabae is a tough shadow to be stuck behind. But at the same time, being a jerk and playing exclusively with cheap and stupid tricks is just pathetic. Certainly a lot of what he does are within the rules, but not how anyone actually wants to play the game. Plus some of the things he does literally aren’t in the rules. Like hitting a ball after your opponent has called for a moment to fix their shoes or faking an injury to get a medical timeout. He’s abusing the fact that the punishment for rule violation in tennis….seems to be nonexistent.

In the end his grand win over Nabae….is completely meaningless. He probably talks about being the guy who beat Nabae….but what did he really accomplish? They played an obscene amount of games and Nabae simply got tired. That is never going to happen in a real match. I don’t know what this idiot is thinking. He’s never going to beat Nabae like that in this tournament. Never going to play dozens of games in a row and simply winning because he has slightly more stamina than Nabae. I mean stamina is good, but you need to have enough play your style and get through the match. Not play a marathon that will never happen in reality. It’s a complete mirage victory, empty and meaningless. Though I’m sure someone serious like Nabae treated it like a loss despite how dumb it was. 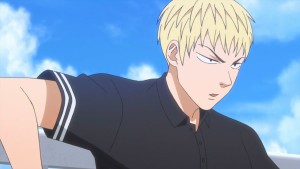 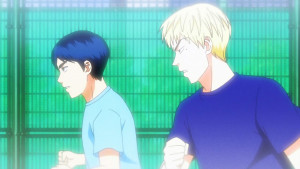 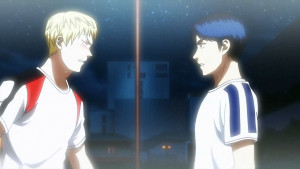 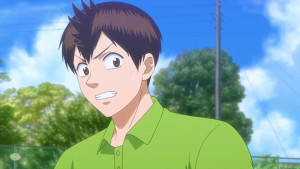 No matter the number of flashbacks, I’m not going to like or respect this guy. He has a fair amount of talent and is skilled. But instead of growing he’s sabotaging his own future. He’s never going to make it as a pro if all he has are tactics like those. How much time is he wasting coming up with these strategies and integrating them into his game? Maruo said himself that it was amazing how he could do all that stuff and not have it mess up his own pace. Which means he’s put a lot of time and energy into using those without having them backfire on him. How much better could he be if he put all that time into practicing actually playing tennis?

Certainly it has some effect, but I can’t see him reaching the top that way. Even Maruo is finding ways to hang in there. He’s focusing more on his tennis and the effect is coming through in his own service game. There is only so much that Takagi can do to mess with him there and that leaves him somewhat helpless. Sadly it is having some effect in his own serve since Maruo has to pay attention to his opponent. He can’t play the game without looking at him and sadly Takagi has more control over how he attacks in his own serve. It’s just a frustrating game to watch as you see these stupid tactics piling up. The guy is practically embarrassing himself to anyone who knows tennis and can see what he’s doing. 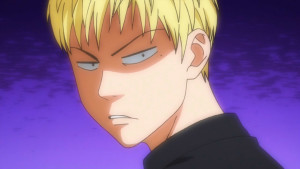 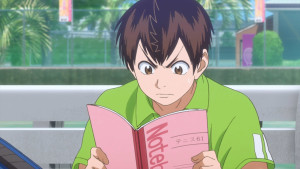 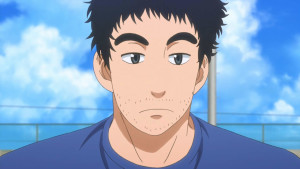 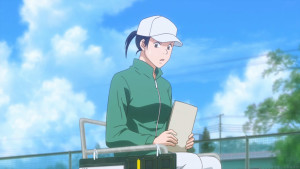 The key is going to be the first set. Ei-chan can’t afford to fall behind with this guy or else his game is going to get more out of control. The kind of stuff he’ll pull while ahead could get really annoying. But if Maruo can break him here and take the first set then he can try to force Takagi to fight him with tennis. Takagi does have good skill and work ethic, but you can imagine he isn’t used to actually playing real games since he’s gotten so into his tricks. He may have beaten Nabae based purely on stamina, but Maruo isn’t going to lose on that front. I suppose one has to respect that he doesn’t always get completely shut down by Nabae, but I just can’t respect this guy’s actual skill.

The coach is taking this pretty calmly and may have a point that Maruo needs to get used to taking on different types of players. This is a very different fight than against Ide. Fighting against pressure is one thing, fighting against your own frustrations and anger is another. It’s a hard thing to stay in control of one’s emotions. Getting angry is exhausting so in a sense there is validity to the tactic in that sense. One thing Takagi needs to pick up is just because there isn’t a rule about something doesn’t mean you can do anything. Competitions also have unwritten rules and understandings. Wanting to win is good, but if that was the only thing that mattered people would kill their opponents before their matches or something insane like that. 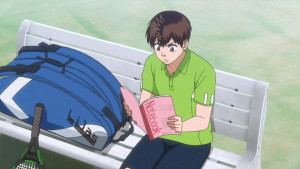 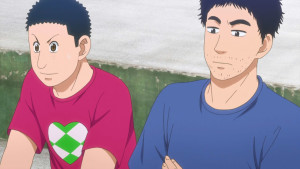 Not the most fun episode since Takagi is ungodly annoying. But I still thought it was a solid episode. The important thing in this match is seeing Maruo fight with himself and overcome. You just want to see him take this guy down because of the type of person they both are. Someone who seriously has worked hard and tried to find his own tennis against someone who wants to win against one person so badly he’ll throw away his own tennis just to get the win. Some people may be able to accept the idea of doing whatever it takes, but I don’t like it. I mean at the end even taking shots at his opponent….what a piece of work.
Score: B