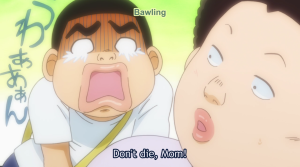 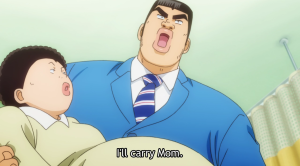 As the episode title suggests, this one places a lot of focus on Takeo’s mom (Yuriko!!), her worldview, and her relationship with her son. Watching her, it’s easy to see where Takeo gets his altruistic streak, as she reacts almost without thinking throughout this episode to help those around her, be they other mothers or her own family, to provide support both physical and emotional.

She’s better at hiding her troubles than her son is, mind you. Her thumbs-ups throughout this episode serves as a great recurring image with a gradually shifting meaning, as we come to realize it isn’t an “I’m fine” so much as an “I don’t want you to worry about me.” But her desire to do so comes from the same place as Takeo’s habit of coddling Yamato, I think, in that they both have a tendency to see the people around them as weaker than they are. And, for the first time since the series began, we find someone who sees Takeo as a part of that “weak” side of the spectrum. 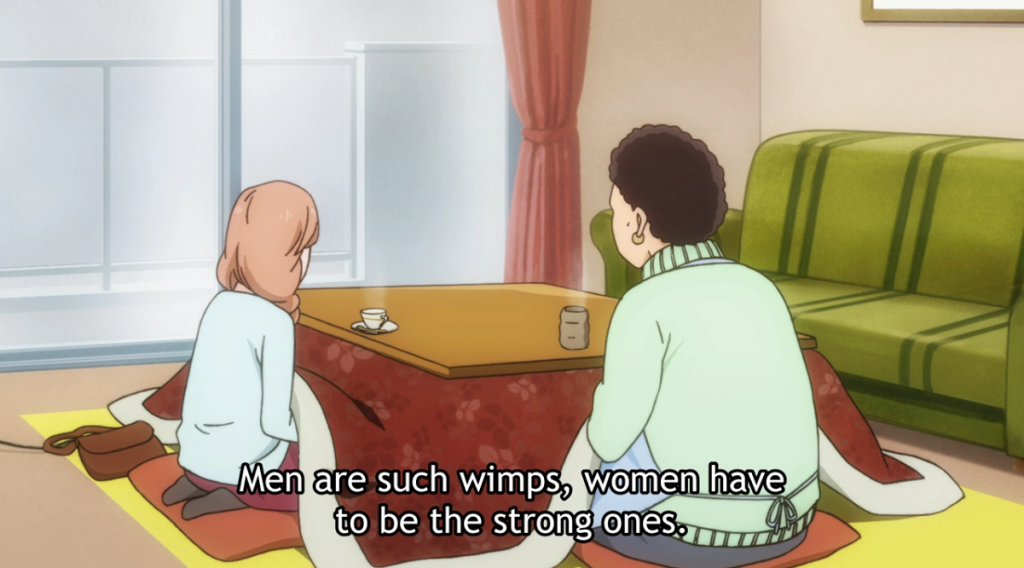 Everyone knows by now that I don’t dig on “women are like this,” “men are like that”-type statements, so I won’t beat that horse. But I will say that despite some initial unease, I ended up really liking Yuriko’s overall point in her conversation with Yamato, which was that there are different kinds of strength—physical, mental, emotional—and that just because Takeo’s physically strong doesn’t mean he doesn’t need help in other ways.

And Yuriko isn’t wrong, exactly, as demonstrated this week when she falls ill and Takeo proceeds to (understandably) freak out. We’ve learned by now that he’s not the type to hide his feelings the way Suna and Yamato can, and that his single-minded nature means he’s also the type to worry almost to the point of obsession when he thinks someone he loves is in trouble. It’s no wonder Yuriko’s more concerned for him than she is for herself. 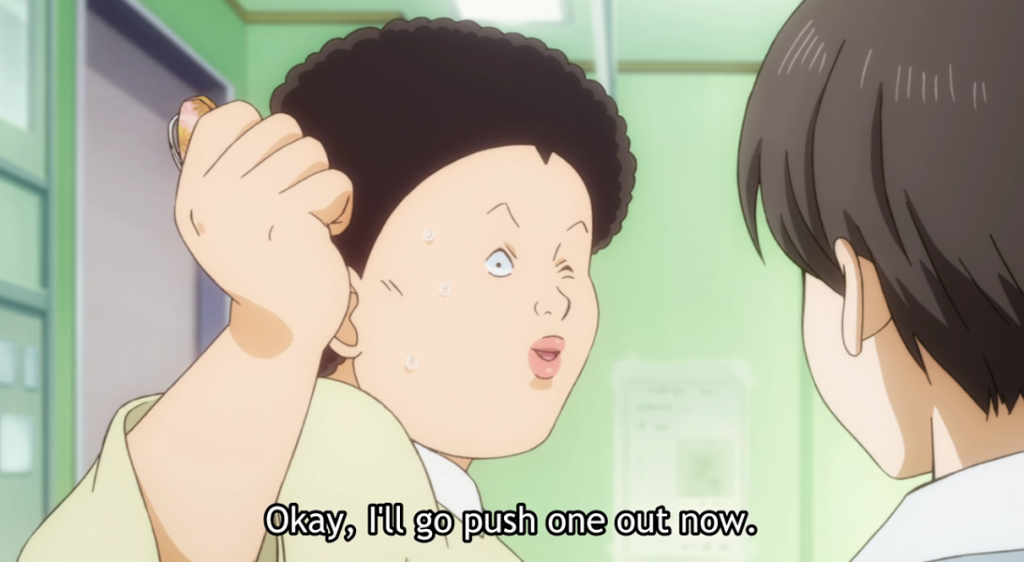 Yuriko is the level of chill Suna one day aspires to be.

Thank goodness for great friends. As much as I enjoyed the dynamic between the Gouda family members, the moment that melted my heart faster than ice cream thrown into a supernova had to be when Suna brought Yamato over and the two of them spent the evening with Takeo, helping him with the chores and basically just doing what they could to keep his mind off his troubles for a few hours. They were a quiet, constant presence this week, serving as Takeo’s mental and emotional support, and the fact that none of them made a big deal out of it—as if it were the most obvious thing in the world—just made it all the sweeter.

It was also a great compare/contrast to when Suna’s father went into surgery about 10 episodes ago. Takeo’s friends served the same purpose that he did for Suna—a distraction and a support system—and some shots deliberately mirrored shots from those episodes, but with some key, telling differences. Takeo’s friends knew what was going on immediately and sprang into action; no one had to have a debate or spend half an episode wondering what to they were “supposed” to do; and Yamato has a much stronger presence now, joining the boys in the waiting room this time.

Of course part of the reason for these changes is that it’s Takeo rather than Suna who’s in crisis this time, but the bigger reason, I think, is that these three have grown significantly closer in the past half-year. They don’t need to wonder what they ought to do. They just do it, as naturally as Yuriko giving away her wheelchair. 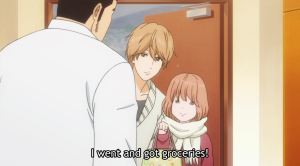 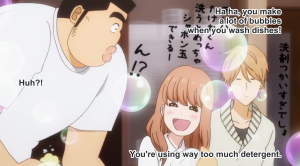 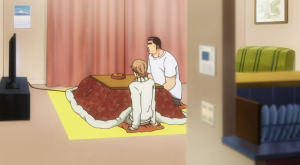 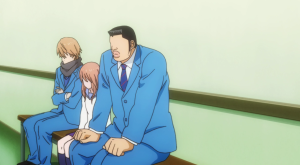 Granted, things might have gone smoother if Yuriko had actually told Takeo what was wrong instead of insisting she’s fine when she obviously isn’t, but that’s the nature of parents, and a big part of the broader story arc here. When Takeo finally finds a way he can help his mom, he does exactly what she would do for someone else: He doesn’t hesitate, but just grabs her and carries her where she needs to go.

Which—slight digression, but mad props to the art design and composer for making that scene as epic as a walk down a hospital hallway can possibly be. This was one of the show’s sloppiest episodes in terms of awkward scene transitions and off-model designs, but it handled its big moments with aplomb, and that’s really all I ask of my mid-season anime. And I mean, c’mon. How great is it that they handled having a baby with the same intensity as going into battle? 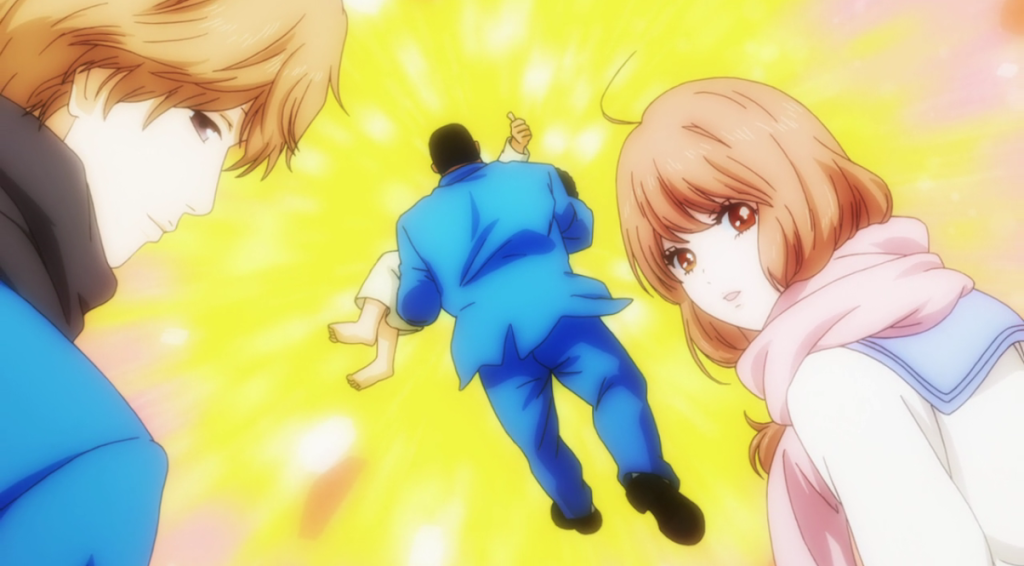 TONIGHT, WE GO INTO LABOR IN HELL!

By the end, everyone has grown up a little, and Yuriko realizes that her son really isn’t a child anymore. He may still have his weaknesses (everyone does), but he’s also someone she and others can rely on when they need to. Maybe that means she’ll be a bit less protective of him in the future.

In main character progression, Takeo finally has a (super vague) idea of what he wants to do in the future—help others—and it turns out Yamato has similar goals, although she’s still on the fence between “kindergarten teacher” and “midwife.” Either way, it’s clear that this is a group of kids that’s going to follow in Yuriko’s footsteps, making the world a little bit nicer and more helpful than it was before. Just like OreMono itself, come to think of it. 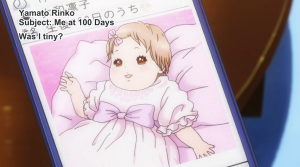 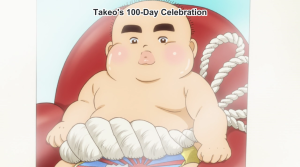