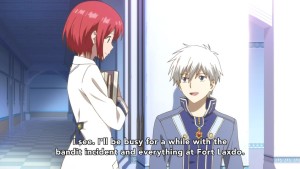 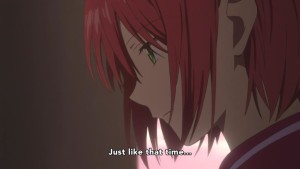 Well… that certainly felt different. After weeks of getting a soothing, carefree and relaxing shoujo show, this week had things become rife with tension and unease instead. 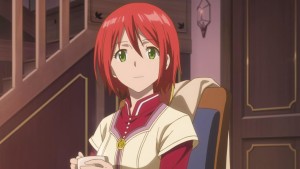 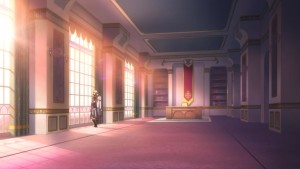 Its amazing how the presence of one character can completely shift the paradigm of a series, and Izuna is one such character. There’s a myriad of reasons for why Izuna’s introduction has such a lasting impact on the entire show.  For one thing, he’s above Zen in social standing and power. His importance, on a pure hierarchical level is enough to disrupt the calm demeanor of the show.

But beyond all of that, Izuna just doesn’t seem to be that likable of a guy. There’s a surface demeanor of playful mischievousness to him for sure, but it unfortunately hides some truly menacing and cruel actions behind it. 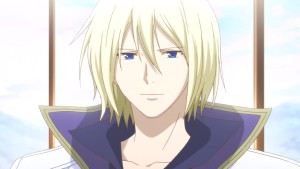 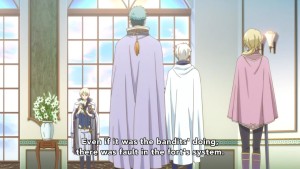 If there was a word to describe Izuna, it would be “uncomfortable”. Every scene with him in it, is pushing people’s buttons, highlighting their insecurities and putting them in awkward situations.

It literally starts with how Izuna lets himself be known, embarrassing Zen, attacking his authority and even his subordinates. And then of course, hiding Shirayuki in the background and having her hear the exchange. 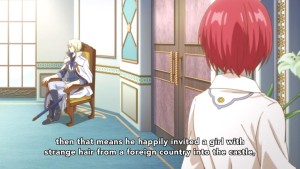 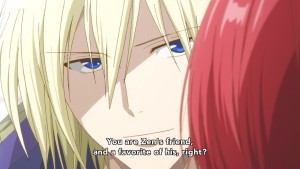 Then its the actual conversation with Shirayuki. Izuna’s words lead me to believe that he’s of a similar mind to that of Haruka’s, namely that Shirayuki being around isn’t prim and proper and befitting of the prince that Zen is.

But unlike Haruka, it seems that Izuna is a much more shrewd individual, and seems to know a lot more about Shirayuki as well. His words cut at the very center of the big tense thing that’s between Shirayuki and Zen after all. 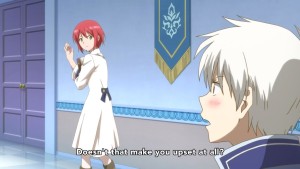 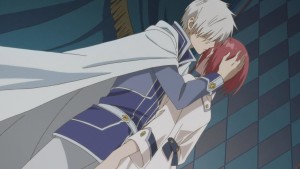 The big elephant in the room (or the whole castle rather XD) is the big Zen Shirayuki situation question; Just what worth do the two bring to one another? Shirayuki isn’t royalty, she isn’t even a citizen of Clarines, so then what is she to Zen and what’s her purpose in being there?

We know that Shirayuki’s personal purpose is to be close to Zen and learn more about the country that created a guy like him but… On a practical level? On a purely rational and unemotional level what is Shirayuki doing in the country of Clariness and the castle? 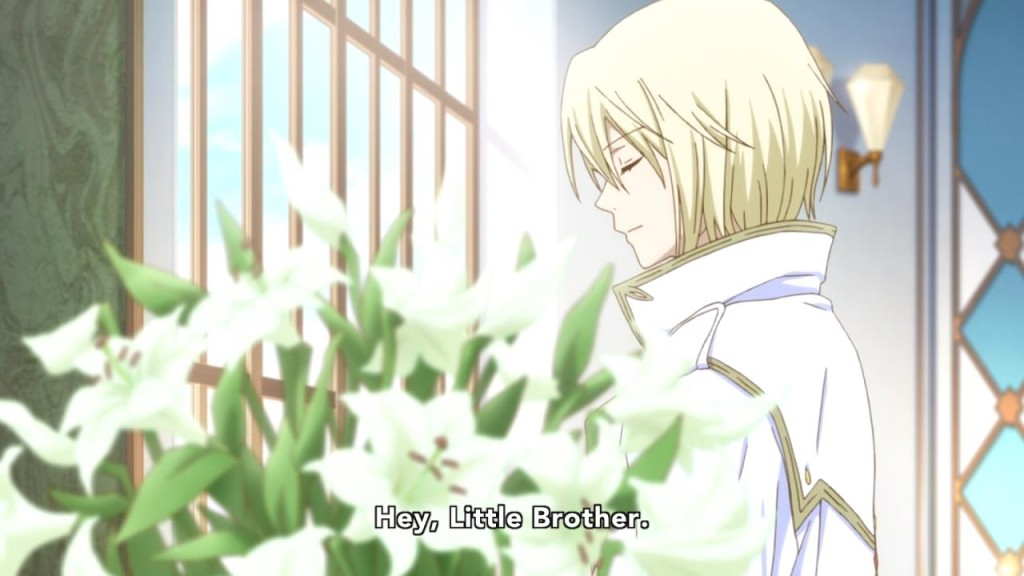 Its a pretty important question, and one that I think Zen and Shirayuki would’ve found the answer to organically, in due time. Izuna’s induction into the situation hasn’t just made things weird, its made them messy.

No more evident is this than when we see the return of another unwelcome character, the sleazeball Prince Raj from the premiere. It seems that Izuna knows a great deal about Shirayuki, going as far as to know her history with Raj to an extent. 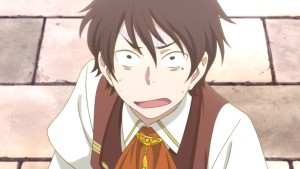 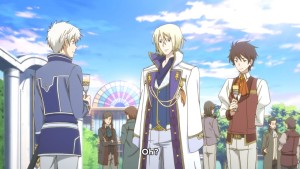 Now, I can see Izuna’s side of it all. Its unclear what kind of relationship he has with his younger brother, but even if its just to preserve the honor of the kingdom, he has to make sure everything’s on the up and up. The way he goes about it though? Putting Zen and Raj under extreme duress in a public setting? Not cool.

And it does kind of blow up in both his and Zen’s faces when Raj lets it be known that the reason he’s avoiding Shirayuki is because he believes that Zen considers her his fiance’. 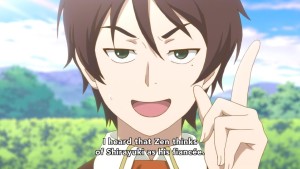 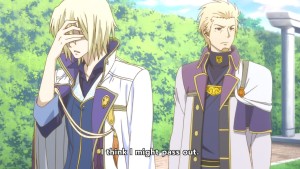 Given the situation at hand, that’s probably the worst possible thing to say, and would invite the wrong kind of gossip. Given how clueless Raj is though, that’s hardly surprising.

But, when Zen drags him over to the side to straighten things out, we get the other side of the equation. I think Zen’s answer to why Shirayuki is at the castle speaks volumes about what he wants. 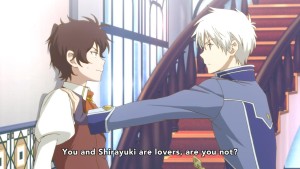 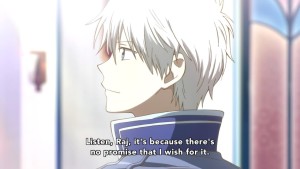 Sure he’s interested in Shirayuki, hell he even nervously prodded her a bit when he said that he might be able to see her for a while, earlier in the day but… He doesn’t want her to be with him because of she feels like she owes him something. I think what he wants is for to want to be with him of her own volition.

Now, its purely obvious that both Zen and Shirayuki actually like each other, so where is all that tension, side stepping and tip toeing coming from. Well, it probably has to do with the fact that Zen is royalty, and with his position come all these problems and issues. 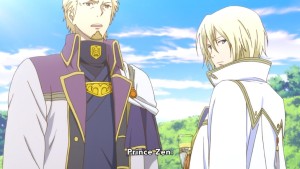 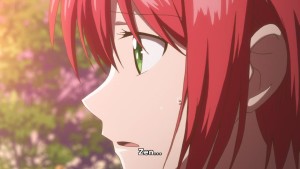 In many ways, with Izuna’s introduction, we’re coming back to the uglyness of Akagami no Shirayuki-hime’s world. The difference between the royalty and common folk, and all that is what’s at the heart of all the problems that Shirayuki and Zen seem to be facing right now.

So then, what is the answer to this conundrum that Shirayuki finds herself in? Her back is kind of at the wall. She knows that Raj is there at the place, and she knows that Izuna is at the very least against her. He’s put forward the question indirectly to her, and by the end of the episode, it seems like she’s at least found some answer. 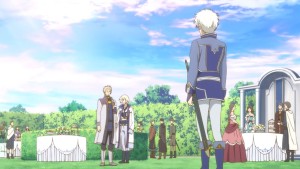 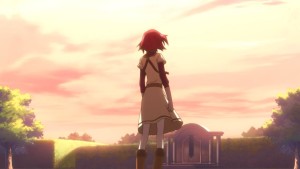 What is that answer? We won’t know until next week I suppose. There’s a lot to be curious about. Is the first impression we get from Izuna very much what it’ll be going forward? Or is there more to his actions that meets the eye? Its too soon to tell.

One thing’s for sure, while I loved the calm and soothing nature of the show from the last 5 weeks, this new, tense show is just as good. There’s a sense of immediacy and importance to everything now. Every word uttered, every action taken, has implications. What those implications are, seem very much shrouded in mystery until next week. In the end, while I’m pretty confident that we’ll get back to the restful nature of this show soon enough, its nice to see some strife changes things up a bit. 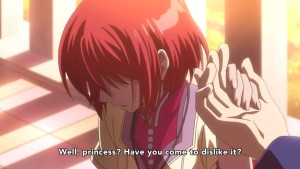 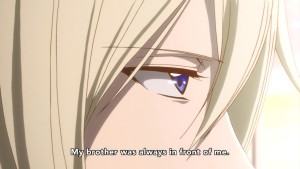 Seems like the question of what Shirayuki’s role and place in the castle is, and her response to Izuna will very much be what we get next week. Its going to be a painful week of wait!