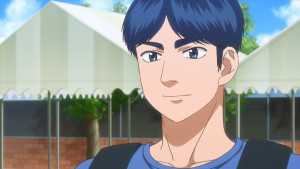 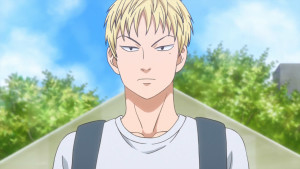 This was a much needed breather episode after the intensity of the last few episodes. They needed some time to see how Ide is going to move on from this, how Maruo is dealing with this, and just catching up with Natsu. I enjoyed the episode overall even if it wasn’t the most intense. Got a chance to see the kind of guy that Maruo is going to face next. Someone who is perhaps even more obsessed with Nabae than anyone else in the show. You can at least get some read from this Takagi guy. Someone with a less than pleasant personality who is determined to beat Nabae again in an official match. However this guy managed to beat Nabae, it makes him someone to keep an eye on. Maruo is going right into another match against a fairly high seed in this tournament. Just few easy matches out there at this stage.

I do agree with Maruo that going as far as he can in this tournament and facing Nabae again is huge. Their last official match had him not really in the same league. He needs more accurate data and experience against Nabae before a match that will literally decide his tennis future. There is no road to the top that doesn’t go past Nabae. I’m sure Nabae would appreciate getting more data playing against Maruo, though he probably got a fair amount watching the match against Ide. These two remain an interesting duo since they have fairly similar methods of improving. 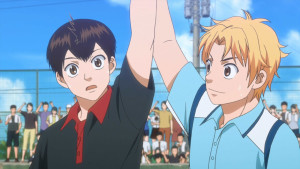 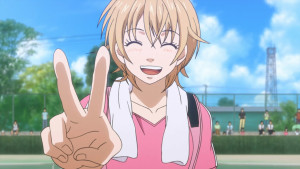 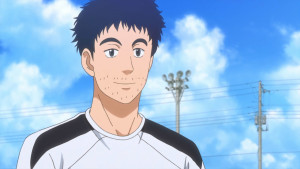 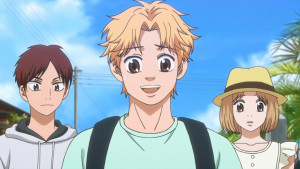 I did like the aftermath for Ide and how he is going to keep on his own path. While obviously missing out on the All-Japan Junior sucks for him, he’s not giving up on tennis or anything. He’s just going to change gears and get ready to go overseas. He is the type that can really handle himself in new environments and taking advantage of playing against elite players while he’s in a growing stage isn’t a bad idea at all. I do like Ide as a character, he’s a fun guy that does take the crowd into consideration. I can understand how Maruo takes the other route of basically trying to shut out the crowd from his awareness, but there is that other method of using the crowd to feed your own play. Probably easier for fans to get attached to someone like Ide, though you get plenty of fans just by playing well as we saw in this episode.

Not much to say about his short match this episode. It’s just one of those unimportant matches that he needs to get through before the next important match. Can only have so many impactful matches or the tournament will simply drag on. This was a good moment just to have him realize that people are watching him and they are cheering him on. He’s gaining fans as he goes and that’s something he’ll need to keep aware of.

The discussion on the “zone” made sense and didn’t seem over the top. There are athletes who just seem to get into that kind of zone and play amazing. Just a combination of factors or even a conscious decision to get absorbed into the moment and focus so well on the game that your play improves. It’s not something easy to get ones head around and so isn’t something that Maruo can really rely on right now. Ide can just naturally reach that kind of stage and it seems like Natsu may also be that type. She doesn’t really notice when she is in the zone or what that even is, but is certainly aware when her play really spikes in quality. 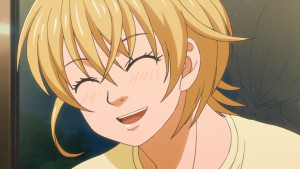 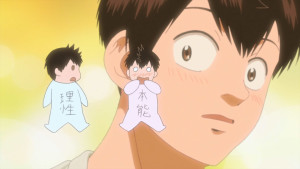 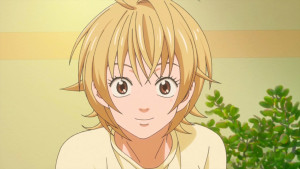 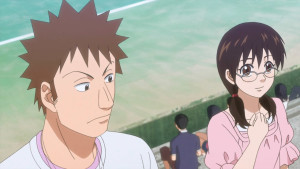 Of course it was nice to have a few little scenes with Maruo and Natsu. It shows that just the confession and starting to date isn’t the end of the road. A lot of series kind of treat it as the end goal, but we’re going to see here it’s a long road ahead for these two. How their relationship develops, how they interact, it will be small steps forward for them as they figure that kind of thing out. Will continue to have Maruo fighting in his own head about whether to do things or hold up. Just the desire to hold her hand had him in a mental battle XD. While Natsu is more instinctive in her actions I’m sure she’s also thinking about how to handle their relationship at this stage. Should be fun to see how things go with these two.

It is certainly a harsh reality that the losers have to go straight home, but that’s how it goes. The wall to get into the All-Japan Junior is a high one and some just don’t get through. Really it’s a miracle that so many actually are going ahead past that second round. More will fall, but it speaks highly of the STC that they had a good result in this tournament at the current stage. Even Yukichi’s fall in this episode was after the cut-off point so he can play in the next big tournament as well. And of course it’s sad for Sasaki that she’s got to now fully except the current reality, but at least she’s on the road to getting past it. Wouldn’t be surprised if she takes a bit of time off watching matches just to relax a little. 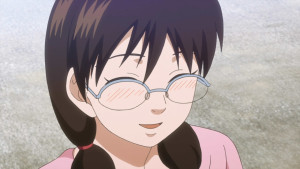 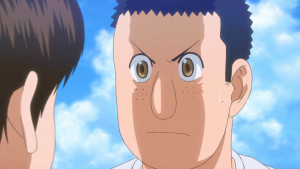 Not the most exciting episode, but these are necessary sometimes. It did move a lot of little things forward from relationships to the tournament itself. I can’t wait to see the next match and how Maruo will handle it. In a sense he can lose at any time now since he’s locked into the tournament, though he obviously wants to go extremely far so for once he can get a seed spot of some nature. Hard to say if this match can capture the kind of intensity we saw against Ide, but it will be fun to watch and find out.
Score: B+