Man … that was a really tense moment at the end of the episode there – kudos to everyone for bonding together and helping when it was really needed. Yuri really is quite intelligent, and Kurumi is just plain awesome. Also was nice to see Miki finally make that teeny leap of courage there. But without a doubt the most interesting parts of the episode for me centered around Yuki. Much of the episode itself that featured her were the normal “carryings on” of her being relentlessly cheerful and happy, but when she actually caught sight of the zombies lurching out of the movie theatre doors it triggered long buried memories in her, and those teeny flashbacks were some of the most interesting parts of the episode proper. 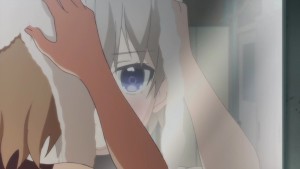 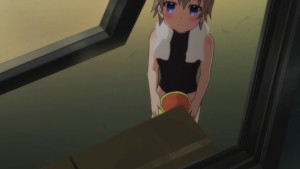 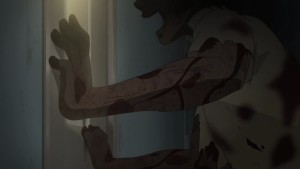 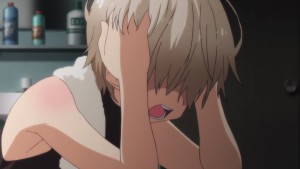 First and foremost I should mention that this episode re-affirmed that the adaptation just continues to be well done. The connection of giving Taromarou his own back story and making him a character unto himself just … worked out really well here. In some ways it is “better” than the source material itself – and in fact it’s so well done up to now that it really furthers the suspicion that the mangaka’s input IS directly involved in the anime adaptation. The choices and familiarity with the narrative is just too well done. But whether it is a result of direct involvement or no, kudos to the anime staff for bringing such elements in and making them work as well as they have.

And speaking of making elements work, one of the things that makes Gakkou Gurashi work as well as it does in the manga is that balance between the “cute girls doing cute things” (i.e. the clothes shopping sequence) and the whiplash of the dark “zombie apocalypse” setting (i.e. the scene of saving Miki from being eaten and helping her escape) – and the anime is doing an excellent job in cultivating the same overall effect. In some ways it may be “understandable” as well as “effective” because it comes out of the wellspring of its main proponent (Yuki) desperately trying to cope with the horrible situation she has found herself in and, as was finally hinted at in this episode, the horrible things she has seen. 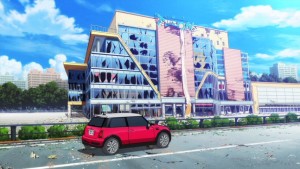 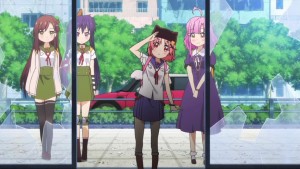 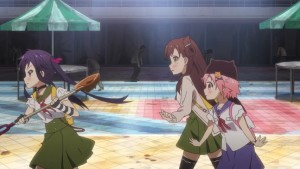 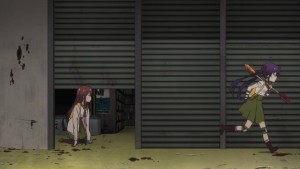 A few immediate tidbits occurred to me during the episode itself. For one thing, it looks like there have been times before when the trio “went shopping” before this (they mentioned it had been a while since the last time), and it also seems like they knew their destination ahead of time – I guess that particular mall was well known before the zombie outbreak occurred, but it seems this was the first time they had been to that particular place. Did make me wonder where else they went, though – aside from the school cafeteria and store, of course. It also seems this is the first time they actually took a car. It would be tricky and dangerous to sneak outside the school to the staff parking lot with a set of randomly selected car keys and try each of the cars one by one, I think. Perhaps they made small foraging/raiding attempts on foot into nearby private homes?

Also this episode seemed to found what appeared to confirm that the zombies only seem to eat meat. I would guess they could learn this from the school setting, but Yuri knew that the food in the market would be spoiled, which to me also meant it would be untouched (except perhaps by survivors early on who were able to escape getting bitten). But yes – canned food is definitely the way to go, and Kurumi knew that full well. 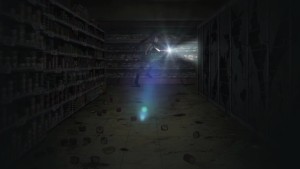 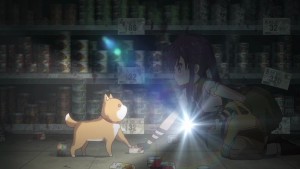 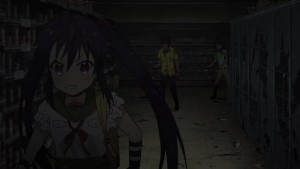 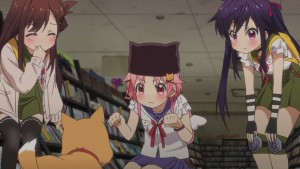 Another thing about this episode is how it emphasizes an unnerving quality about Kurumi – she is brave, yes, and has confidence in her athletic abilities, it seems. But to my mind she also has a dash of foolhardiness to her, though this is the first time it seems to have manifested itself. Heading off on her own to the supermarket or investigating the noises of a barricaded room (meaning the movie theatre)? Just … no. Each time she head off in such directions I would blink in surprise for a second and then think “You idiot! What are you doing?!” Then she would escape the situation or what not and I would find myself grumbling “Don’t do these things to me you dummy….”

Still – the bravery to do things has its good points too. Her sliding down the escalator hand rail and taking out the handful of zombies at the bottom was quite impressive and … well … no one else in the anime could (or would for that matter) do such a thing. She is invaluable that way, I think. Hopefully this willingness to take risks will not come back to bite her in the end (erm … no pun intended here). 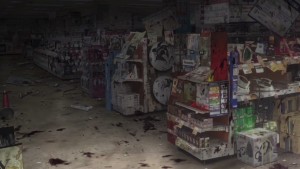 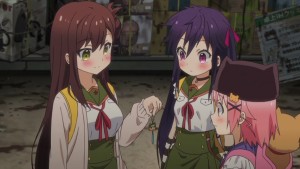 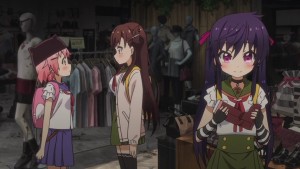 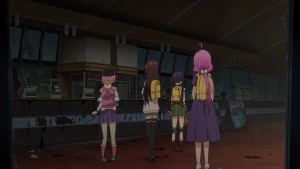 Oh yes – speaking of which, another thing this episode confirmed via the examination of Taromarou by Yuri on their first meeting is that not only does it seem that the process of zombification is transferred solely be through being bit (perhaps the saliva?), but also that it can happen to other animals as well – assuming the animal escapes before being killed and eaten. Miki was grabbed by one of the zombies (as was Kurumi in episode 2) and nothing happened, so just plain contact is not a problem, aside from being creepy and scary, of course.

But the possibility of Taromarou being able to be zombified raises the question of other things – what about birds? Or fish? Or insects, for that matter? The entire city is a bit of a disaster zone, but one thing I have notices thus far is the tremendous lack of animals, including rats. If Taromarou’s reaction to the zombie in episode 2 is any indication, it is quite possible that animals are naturally scared of the zombies, and are hiding and/or avoiding them at all costs. Another possibility is that the animals have been … eaten. 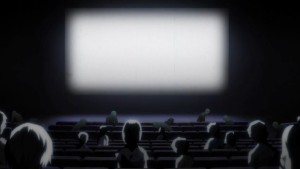 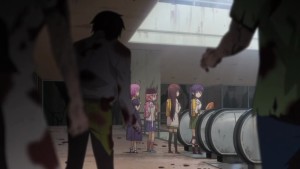 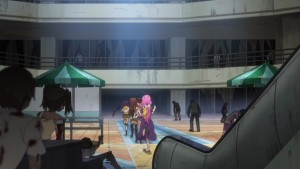 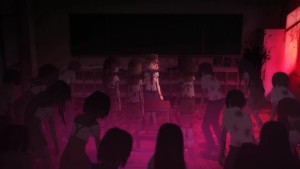 The most powerful moments in the episode, though, as mentioned earlier, were undoubtedly centered around Yuki. It began with the scene in the movie theatre where the zombies came lurching around the corner in full view of Yuki’s sight in an unplanned manner – in other words, she was taken by surprise and could not “pre-filter” things ahead of time, such as happened when they first entered the mall. In the escape sequence afterwards Yuki went into a state of dazed shock and began remembering things dimly, so much so that she developed a fever way quicker than one normally might. Even that was not so bad, but when they were about to leave the mall proper and she saw Miki being attacked she had that split second, hazy flashback of what appeared to be Megu-nee being cornered by zombies and clutching her left arm as if she had been wounded.

The other thing that certainly gave occasion for thought was the scene where Kurumi was reflecting on the movie theatre she saw, where most of the people inside were children, yet it had been barricaded from the outside. Someone had been bit that was in there, and some survivors saw what either was happening or might happen and imprisoned all the people inside. Which further hints to me that there were survivors other than Miki and Kei after the attack. Now going to the manga source we know that this was so, and that that part of the manga was not adapted into Miki’s rescue in this episode and the previous one – but perhaps they will go into that in the next episode, so no further spoilers about that here! ^^ 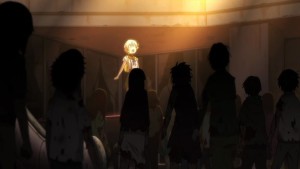 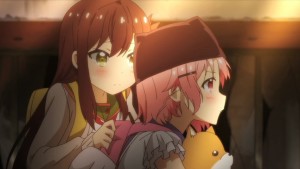 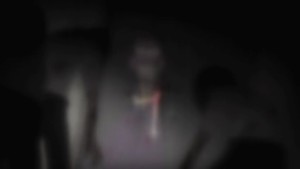 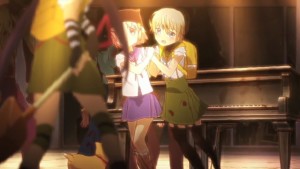 Next week looks to be adapting the chapters of Miki’s initial meetings with all the other girls after being brought back to the School Life Club after her rescue. Should be interesting … once again, concerning the narrative in the source this is where we get more interesting insights into not only Yuki, but also each of the other members of the club and the effect Yuki has on them all; a sort of “definition” of her “place” in the Club, I suppose. Am very much looking forward to it, though if my guess is correct that should conclude the “flashback of how Miki joined” mini arc we seem to be nearing the end of. And once again, kudos to the studio – flashbacks are often really tricky to pull off, especially in a mini-arc form, but the studio as a whole has done an excellent job here. This is plain ‘ole good storytelling we are seeing here, and I am very grateful! Let’s hope they can keep up the pace.