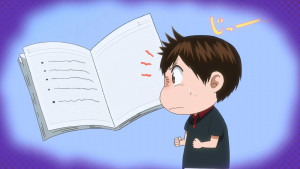 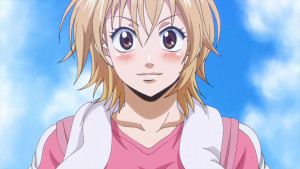 Now that is how you end a match! This episode was full intensity from start to finish. Even just hitting on the quick Ide flashback still kept the energy going and made this a match I couldn’t stop watching until it was over. This was just an amazing conclusion to an amazing match, one of the best that Baby Steps has had to this point. Two guys who were just completely at their best, and playing with all they had. All the strength Ide gets from the crowd was pitted against Maruo who figured out how to face and erase the pressure to find his absolute ideal state of play. It is not an exaggeration to say this is the strongest we have ever seen Maruo in this anime. He has never been better than this one episode.

As Maruo found his way so did those around him. Kageyama and Sasaki were both pushing to keep up with the crowd that was just getting more excited the longer this tight game continued. Then of course Natsu arrived to save the day XD. Well it’s not like she completely changed things, but her being there did have a real impact. It was a strong reminder that Maruo isn’t just fighting against the crowd and Ide, but he has supporters as well. People who want nothing more than to see him succeed and people he wants to walk down that road with. As expected she won her match and probably after reporting in ran all the way down there to see the end of Maruo’s game. Definitely a match that means a lot to her. 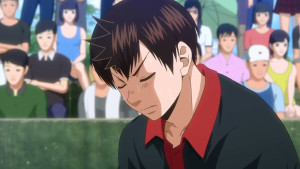 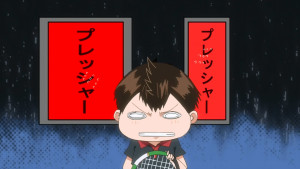 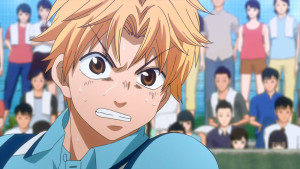 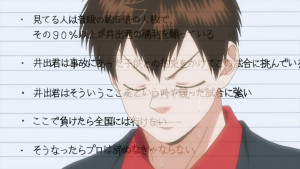 Ei-chan just found the right method and balance to be able to fight on even footing against Ide. In his own way he figured out how to tackle the pressure and fight back. The key really was facing that pressure instead of ignoring it. Ignoring it took its toll and made him play worse because of the tension in his body. But facing it allowed him to start loosening up and then he took another step in starting to erase it. This was very much an Ei-chan kind of win. He had to test and experiment on things to find the right answer. If he erased too much pressure it was basically like what he was doing in the first place, ignoring the pressure and letting it drag him down. But not erasing enough pressure didn’t push him towards his ideal state. He had to fight to find it and really just accidentally fall into the right answer.

It was all the more difficult because the match was almost a living thing. Each point brought with it more or less pressure on Ei-chan. If he didn’t accurately recognize the changing pressures then he was ignoring some of it and it would bring his game back down again. That case where he didn’t realize he was adding pressure by thinking “2 more points and I win” really hurt his return game. It was a brutal fight for Maruo’s mind to the bitter end. But, he did find the right balance and just reached an ideal state. It wasn’t like Ei-chan awakened to some kind of super power, but rather he just found that perfect condition that happens in sports. There are times when guys just are at their absolute best for stretches, everything they do just seems to be right. 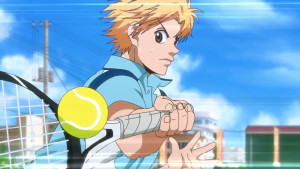 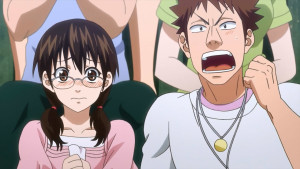 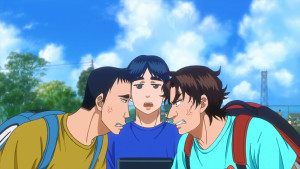 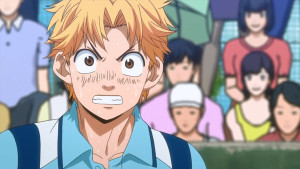 This match was just back and forth intensity for long stretches of time, especially near the end. Just watching through the “between the legs shot” which was now very much worth the practice and then Ide going for the back to back drop shot, just showed that both these guys were playing at insanely high levels. That last point was pretty perfectly handled in my mind. There wasn’t really any internal thinking, but just these two running and chasing for the ball as well as they could. Both Maruo and Ide really pushed the pace of that last point and Maruo had to earn that win. Ide wasn’t going to give it to him easily. A few shots you thought might be the end of it such as that jumping return from Ei-chan just couldn’t end it. Right to the bitter end both players were fighting to win. While it seemed that the last shot for Maruo was in, all you could do was wait in the silence for the ref to make the call. In the end you have to give full credit to Ide who played a spectacular game. The man who brings a storm that’s for sure.

The stuff going on outside the game itself was great. I enjoyed getting Nabae’s thoughts on the match and how he judged Maruo’s progress. Then of course you had the showdown with Okada and Araya who both had their picks for the winner XD. Okada being a friend of Ide and Araya being on Maruo’s side considering their history. That was fun along with Okada giving a good background story on how Ide really is a monster of these kinds of matches. The guy has incredible mental strength. He certainly is the type that thrives even overseas, such a friendly and energetic kind of guy. Plus his ability to make the game exciting just gets him fans wherever he goes. He really made a perfect opponent for Maruo who needed to win this match no matter what. If he lost then his road was going to become a lot more murky and unknown. 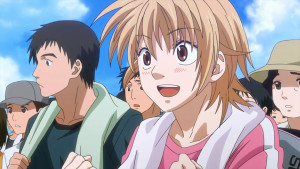 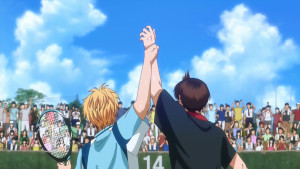 Just an amazing match in all respects. They brought up the visual quality at spots that mattered which I appreciated and soundtrack/voice acting was just spot on for this one. Despite knowing how it was going to play out I was still pulled into the moment and had a few “yes!” reactions as well to some key points. It is hard not to root for Ei-chan. He’s someone who has certain talents, but has worked like a madman to grow as fast as he has. Now he’s punched his ticket to the All-Japan Junior! Of course going as far as he can in this tournament is crucial. Otherwise just like the last tournament he’ll be ranked too low and may have to fight a monster like Nabae really early on. Going as far as he can so he can face someone like Nabae is huge. Next up should be a little bit of aftermath, celebration, and getting ready for the next match.
Score: A+