This week was the beginning of what proved to be a mini-arc focusing around the bringing of Miki into the School Life Club, and it was pretty effective on the whole, I thought. It was also interesting to see the various other choices the adaptation made, particularly around Taroumaru. Narrative wise it seems this takes place some time after what appears to be Megu-nee’s death, as both Yuri and Kurumi are already interacting with Yuki and “Megu-nee” as they have in the first and second episodes. The form the narrative seems to be taking place in is via flashback – again, no surprise there. As soon as the first episode aired and we were shown Miki amongst the cast I guessed (as a reader of the source material) that they would have to use flashback-mode at some point if they were going to introduce all the viewers to each of the cast. 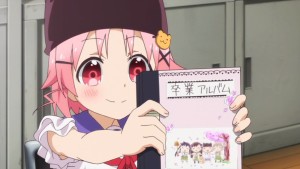 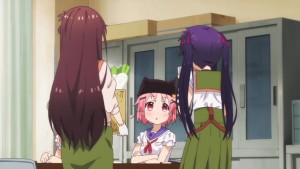 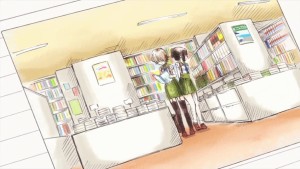 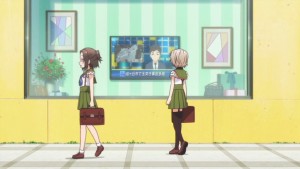 The narrative itself begins with all the members of the School Life Club coming across Yuki in the process of making a graduation year book for the club filled with her memoirs and hand drawn pictures of things. Yuki is not a very talented drawer, but on looking through the book they also see that Miki has been helping her, and Miki is much more skilled at drawing. One of the pictures they come across shows Miki and someone else in a bookstore, and on asking who the other person is Miki mentions that it is a very dear friend of hers named Kei – and with this the flashback mode begins.

Just as last week we were shown the beginnings of the zombie apocalypse outbreak through the perspective of Megu-nee, so this week we were shown it’s beginnings through the perspective of Miki and her close friend Kei. For them school happened to get out early that day, and they were stopping by a few stores and places on their way home – primarily stores in a multi-storey mall. While they were making their way to the mall they did see a tv news clip of something going wrong en route, but they just briefly glanced at the screen and did not think much of it, like most people might. 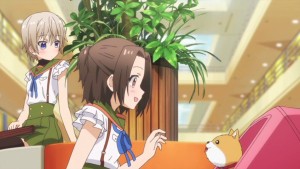 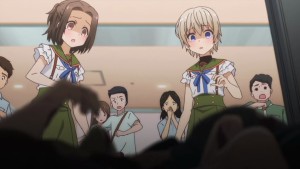 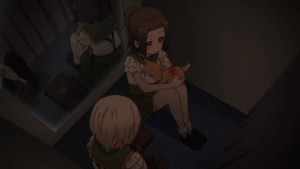 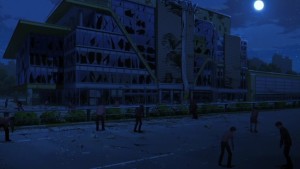 It was in the mall itself that I was given a surprise – again, as a source material reader – and that was with the introduction of Taroumaru and his owner (a sweet-natured old lady in a kimono) as also being in the mall at the time and said puppy taking a shine to Kei. In the manga when Taroumaru first appears it is only mentioned that “Yuki found the dog somewhere” and it was obviously near or in the school, but the adaptation has given the dog a little more backstory and context for things. When the zombies invade Taroumaru’s owner gets bit, unfortunately, and zombified, but the dog itself escapes and sniffs out Kei (and Miki) hiding in the dressing room of one of the clothing stores.

The next thing we know Kei, Miki and Taroumaru are all living in a room holed up with piles of heavy boxes in front of the door – the zombies periodically try to force their way into the room on a whim, it seems – and have somehow gathered some food and water supplies, while even having the facilities of running water and a toilet at their disposal. After remaining there for some time (it is not clear how long) Kei finally can’t take it any more (possibly she was fearful of losing her sanity) and just … leaves … after having what may be a final farewell with Miki. Needless to say Miki is horribly and understandably hurt by Kei leaving and unfortunately lashes out at Taroumaru, who himself leaves after being so scared by it. And this was another addition not in the source – it actually sets some of the “reasoning” behind why the dog reacts badly to Miki. 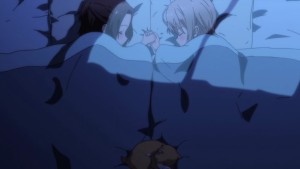 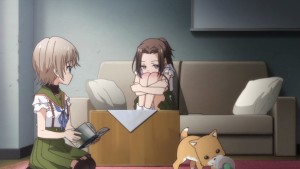 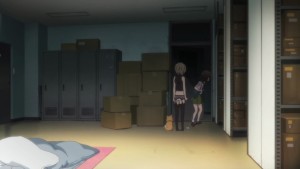 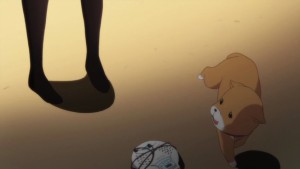 After all this the scene switches to the School Life Club, obviously focusing on its sole members at the time – Yuki, Kurumi, Yuri and the imaginary Megu-nee. Yuki suddenly decides (in the middle of the night, waking up the other two in the process) that it would be great for the club members to go on an outing as a sort of “club activity”, and in an dimly eerie sequence goes and “gets permission from the club advisor” to do so – she also happens to get Megu-nee’s car keys in the process. And while the idea of “going on an outing” is all well and good, and using a car as a way to do so pretty smart (the zombies are not the fastest moving creatures) there is the problem of getting TO said car.

Unsurprisingly this duty falls to Kurumi, who goes into “Shovel Knight” mode, and undertakes the super dangerous feat of cutting her way through the zombies en route to Megu-nee’s car. Meanwhile Yuki and Yuki are slowly and stealthily making their way to the main entrance of the school where they have agreed to meet Kurumi once she gets the car. All along the way Yuki is encountering things that do not compute, and making unnerving comments like “Oh? Are the stairs closed for repairs?” (Yuri’s composure in interacting with Yuki en route is commendable, in my opinion.) Finally Kurumi makes it to the car, careens around the corner of the school to the front gate, and then zooms off with Yuki and Yuri (and the imaginary Megu-nee) into the sunset – during which trip we see that a large number of the other buildings in the city are in a similar condition as the school: a bleak and desolate lanscape indeed. 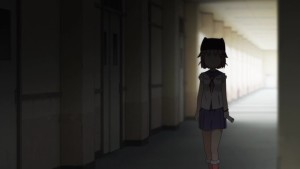 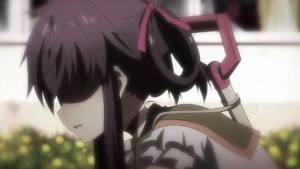 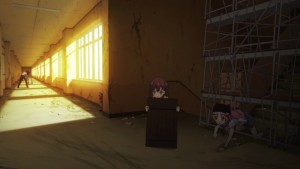 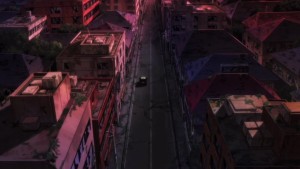 There were also other elements in the narrative of Miki and Kei after the zombie apocalypse took place itself that were skipped over in the adaptation, but I am kinda unsure whether or no to mention them, as it is possible they could be touched in the next episode proper. Even so, the series continues to impress, and while the adaptation may not be a straightforward 1=1 work, the choices it has been making sorta “make sense” and I can easily see how they have been done so well that they don’t even raise any questions in the minds of anime only viewers.

Hafta say, though. The ED sequence of this episode was excellent – the sad and mournful longing blues style crooning while focusing on snapshots of Kei and Miki spending time together in the episode proper really was effective, and drove the ambience and disposition of Miki home quite nicely. At least for me. Kudos to the studio for another good choice there. ^^