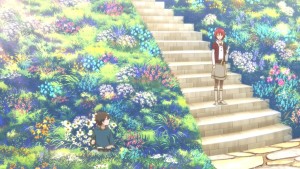 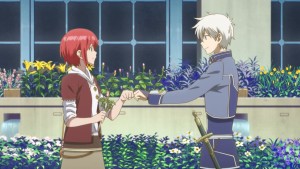 Akagami no Shirayuki-hime is a series that is a cut above the rest this season, of that I was acutely aware. It was this episode, however, that really made a case for why it might be one of the best romance series ever, period. 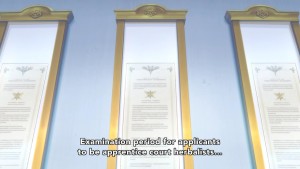 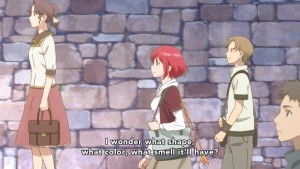 The fourth episode had us breeze through Shirayuki’s journey towards becoming a court herbalist apprentice, and also introduced us to not only a bunch of new characters but a new aspect of Zen’s world itself. The intricate connection between character development and world building and the finesse with which the series handles both, makes Akagami no Shirayuki something truly special.

In many ways, this week’s episode signaled a huge change in the status quo for Shirayuki and Zen. By about midway through the episode, Shirayuki ends up becoming an apprentice to the court herbalist Ryu. Ryu is the young boy we’ve seen a few times before, but who we really get to know this week. 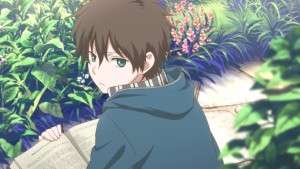 Ryu’s an interesting addition to the cast. The boy is clearly a prodigy, wise well beyond his years, and a bit socially inept as a result. Yet, socially inept he may be, he’s another very likable character in what is shaping up to be quite the long list.

I think what this episode did really well, beyond just Ryu’s introduction, was as establish a great connection between him, Shirayuki and Zen. And its from that connection, that the world for this series really starts to come alive. I think Spring 2014’s Soredemo Sekaii Wa Utsukushii (The World is Still Beautiful) kind of started to get there a bit, establishing the castle where the characters resided as a nice, happy place. Akagami no Shirayuki though? I think it just nails it. 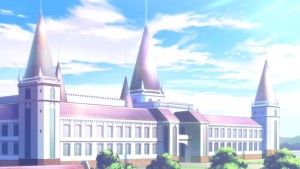 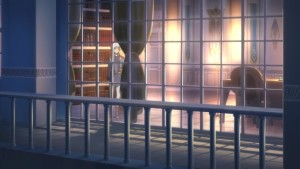 Zen’s Castle just feels like  it overflows with positivity and warmth. It feels like a place where not only all the important people gather, but rather the right kind of people. Its a place where Zen’s inner circle resides after all, and if nothing else, Zen’s group of friends.comrades seem like the kind of people I’d want to get to know.

When a young boy like Ryu can go right to Zen (a prince) for advice or problems, you know you’re in a place that brings out the best in people. It reflects really well on Zen too, since he seems to know a lot of the people around him quite well. 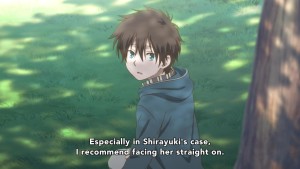 Its just one scene, where Zen peers at Ryu through the window, and Ryu utters the seemingly surprised words “Ouji (Prince)” in a kind of matter factly kind of way. That one line communicates the fact that Zen and Ryu know each other quite well, and from there on the whole exchange and talk between the two under the tree feels so organic, so natural. That subtlety of the writing, the way in which Akagami no Shirayuki can establish a genuine history between two characters in a matter of minutes, is just master-class work.

Dat writing! I think one of the more interesting aspects of Akagami no Shirayuki-hime’s writing is in how layered it is. The choice of words, though seemingly insignificant at the time, can relate to rather big concepts later on. Case in point Shirayuki’s words about “wanting to see what kind of country Zen lives in”. 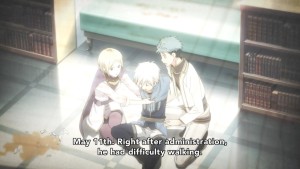 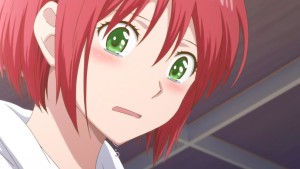 The true significance of those words really came out this week, when we got to see more of the castle. Through Shirayuki’s exploration of the castle, we truly begin to get a better sense of who Zen really is. Beyond the happy go lucky, confident and brash exterior is a pretty rough upbringing.

Zen mentioned before that he been building up an immunity to poison, but just how that happened is enough to reduce poor Shirayuki to tears. It calls back to something that seemed trivial in the first episode, but that whole concept is used to great effect here. Again, its the subtlety that this series has with nearly everything, cleverly laying out the seeds for some stelllar moments later. Forget to pay attention and you’re bound to miss something crucial that could have quite an impact later. 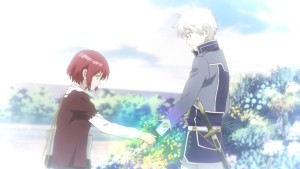 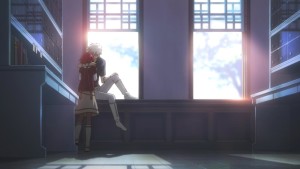 The ongoing connection between Shirayuki and Zen is another subtle element that deserves praise. I’ve said this before, but I love how there’s no big “declaration” of love, or some major turning point that defines their relationship. Its the little bits without the fanfare and over dramatization that are the building blocks of their relationship.

Shirayuki holding Zen’s hand in order to calm herself and Zen realizing it and feeling slightly embarrased? That kind of stuff is refreshing and rare to see in any romantic story, let alone an anime series. 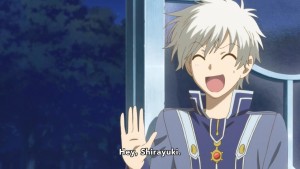 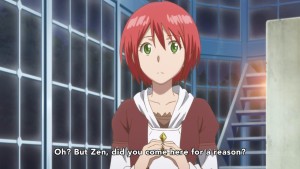 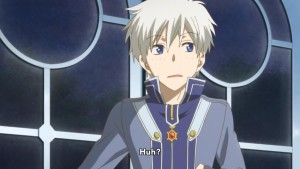 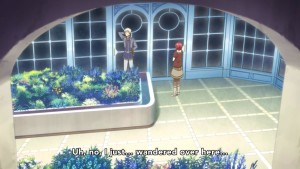 The fact that Zen seems to not so subtly dedicate a bit too much of his time to checking on Shirayuki? Its cute and not creepy because of how the two act about it. Shirayuki’s reactions show that its not unwelcome, and if anything, the care seems a bit endearing. Think about how Zen goes about his approach for Shirayuki and compare it to something in contemporary western culture like Twilight. Yeah…

But its not just the progress of the main couple that’s got a huge amount of depth, but the more world building aspects as well. Shirayuki’s whole thing of being a court herbalist isn’t some kind of macguffin that just gives her a chance to be near Zen. Its a whole sub aspect of the story, that rightly gets its own attention. 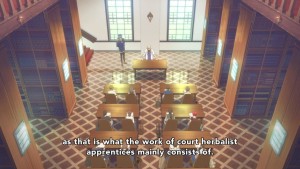 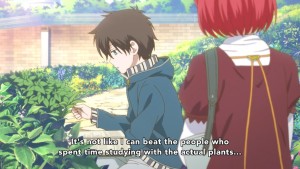 Much like the character relationships, Shirayuki’s exam and eventual herbal work gets the same subtle and layered approach to it. The conversation with Ryu about the rainbow leaf and koko grass plays out beautifully after the exam. There’s also the whole concept of respecting the old traditions alongside book knowledge and science, something that’s very much a more eastern school of thought. This little spice adds a nice sense of originality to this world’s medicine.

And of course, the core of the Court Herbalist exam itself. Its here that we get an idea for how the herbology of this world really works. 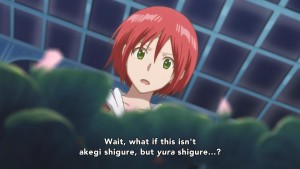 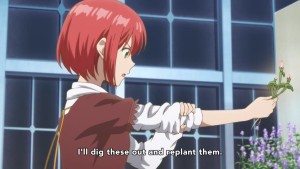 The whole duality of the Akegi Shigure flower and the yura shigure flower was a pretty interesting concept. I don’t pretend to know about plants to really know if cultivating them in a different environment can lead to such disastrous effects as ruining the entire garden, but the show builds it up and develops the idea with enough clout to convince me.

It’s completely in character, then, when Shirayuki discovers the Yura Shigure flower, and even when she’s trapped inside the garden with Zen, focuses on replanting the entire bed of flowers to fix it. 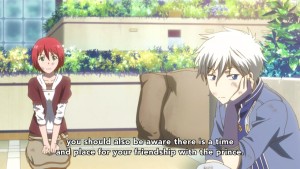 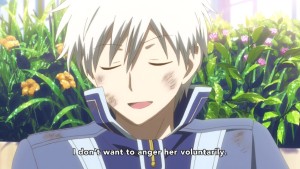 Its also quite great to see that Zen and Shirayuki being alone for an entire night is not something that goes unnoticed even if nothing really “happens”. The chief herbalist, another interesting addition the cast, rightly questions the two of them and then goes on to appreciate Shirayuki does when Zen lets it be known that he’s not about to use his authority and insult her.

The chief herbalist also seems pretty adept at human relationships, and ends up doing some pretty smart setting up of things to benefit everyone. She pairs Ryu with Shirayuki, which is great for both of them. They’re both odd, outliers, and people that can learn a great deal from each other. 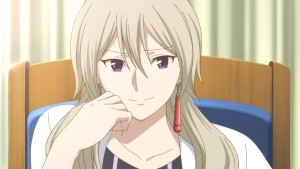 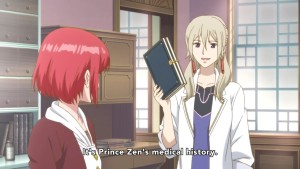 She also goes a step further though, and shows Shirayuki Zen’s medical history. Its here that we get our insight into Zen alongside Shirayuki. The importance of this act cannot be understated, as its pretty much giving Shirayuki a look into the harsher aspects of Zen’s life, and giving her a look at the whole picture, just not the best bits of Zen that she’s able to see. Layers man, this series just keeps layering and layering!

All those layers join together to create a show that is nuanced, intricate and yet very much slow, steady and calmly paced. There’s a peaceful, uplifting quality to this story and a grace that makes all its handy work hard to notice to the undiscerning eye. 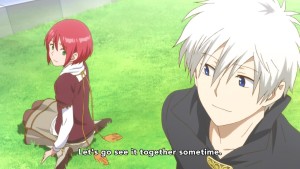 Make no mistake though, while Akagami no Shirayuki-hime may make it look easy, but what its doing is anything but. 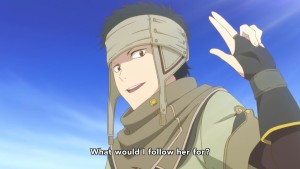 I have no idea what’s happening next week, beyond something regarding an evil spirit, and a return of the series ninja Obi. Lets see what’s what next week then!