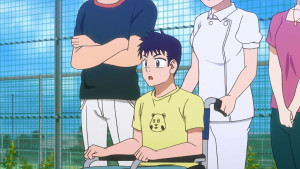 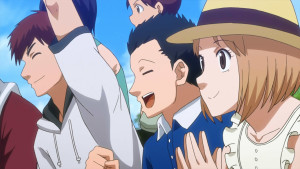 This episode managed to both have a lot of intensity and cover a lot of ground. The match pretty quickly got to the stage of the third set while showing how this game is pushing both competitors. Neither Ide or Maruo want to lose this thing and are giving all they have, it’s just making it a very close and tense match. We saw Ei-chan struggle and fight to hold onto the first set and manage that pretty well. But he just couldn’t find against that wave of pressure and crowd presence in the second set and slipped a bit. Of course a match this good is going to use all three sets, but it’s still managing to put a lot of pressure on Ei-chan who needs to find a way to win this.

We got to see the full power of the Ide effect in this one. Everything this guy does just manages to ramp up the atmosphere and energy. Even that kid showing up was just purely insane timing. It just gave an even bigger boost to Ide and the crowd which just fueled his dominance in the second set. That guy is the type that manages to make everything a positive and a strength for him. In a sense he is like Natsu in that the good things just fuel his play and make him even harder to beat. 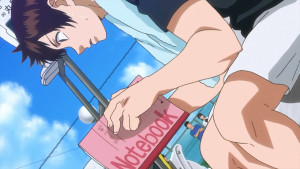 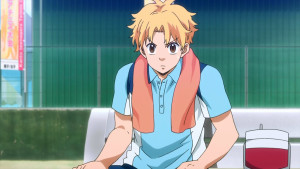 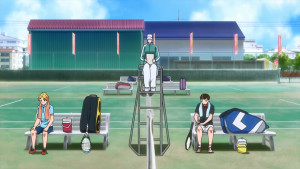 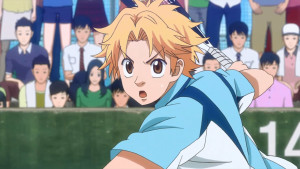 It is interesting that while Maruo and Ide are very much opposites they have key similarities. One of which being the type to get very engrossed in thinking when they have those breaks. Even Maruo ran into the trouble of getting warned (pretty tame punishment really) while he was going over all the data on Ide that he had. He was really bringing his notes to war with him going over every bit of data he had on Ide over a very long period of time. Using all that data did allow him to keep up with his opponent and get an edge at times. He could absorb how Ide would respond to any number of situations and use that to help guide his attack. That combined with his key eyes really is a strong point for Maruo. It even got to the point where they were both too focused on prep that they were missing the call. I guess it saves them from punishment though since penalizing both of them by a point is pretty meaningless.

It does show that even Ide recognizes how dangerous an opponent Maruo is. He knows this guy found his game against Nabae and has the ability to evolve in a hurry. I did like just getting Ide’s thoughts throughout the game and how he is really working himself in this one. Plus he has a pretty natural response to the kid showing up in getting even more determined to win. Maruo isn’t the only person out here who has strong desires to come out on top. It would be interesting to see how Nabae is looking at this match, both in the incredible growth from Ei-chan and again at how dangerous Ide can be in these kinds of matches. 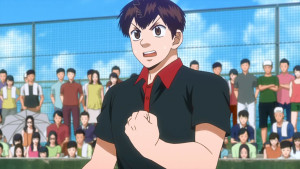 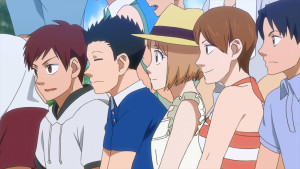 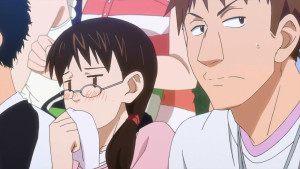 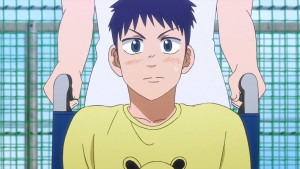 The issue is the crowd. Ei-chan is once again put in a situation where his inexperience is leaving him struggling to adapt. How does one deal with basically a hostile crowd? How is he supposed to deal with the fact that Ide has all these people cheering him? It’s something he doesn’t have an answer to yet. Trying to shake it off or ignore it can still lead to trouble. Even if he’s trying to focus on his opponent his attention is getting distracted and it’s just draining to fight against the flow like that. Being the villain in this kind of situation really is a tough role to take. The drama around the hero and even Ide’s potential comeback (after he fell in the first set) just makes it tough on Maruo to keep on going. He’s getting swallowed up in the atmosphere.

Certainly a problem is that Maruo has to deal with things not easily analyzed. It’s both the effect of the crowd and also Ide’s ability to turn his situation into power. How does one figure that kind of thing out? It’s not as simple as looking at his play, his play is being fueled by something not easily seen or read. This is such a tough match for Ei-chan for that reason. He’s got to fight with all he has against a force that is hard to handle. But in the end he has to face this. Going pro means playing in intense matches with potentially loud crowds. The world isn’t going to give him a break just because the matchup isn’t necessarily favorable. 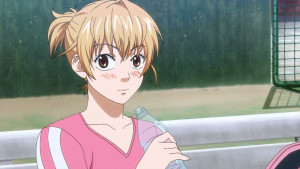 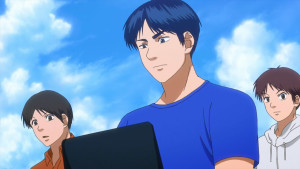 This was a really good episode and time just flew by. I expect this match will continue for a few more episodes. We’ve just gotten the third set underway and all the pressure is now going to weigh down on Ei-chan. Either he can find a way to overcome all this pressure and Ide’s tennis or he can’t. At least I expect Natsu to show up near the end of the match. Regardless of start times she’s prboably having a far easier time against her opponent than Maruo is.
Score: A