If last week’s episode was a focus on the psychologically damaged Yuki this episode could be called a focus on the shovel-wielding twintailed tsundere Kurumi – and just as last week did not solely dwell on Yuki, so this week for Kurumi as well. For the difficulty of the situation these characters find themselves in has (very understandably) made them bond together very tightly – often literally a matter of life and death, so every small action any of the members of the group take is immediately noticed and has immediate impact on the other characters; even the matter of Taroumaru running off last week was extremely important, for not only was there a danger of Taroumaru potentially getting bit and possibly zombified (assuming such things happen to other living beings other than humans) but we also see from this week’s episode that he is almost like a portable zombie detector. On the few occasions the survivors venture out in secrecy such an animal would be very, very useful indeed – especially now that they have experience of his sensitivity to such dangers. 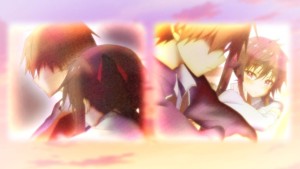 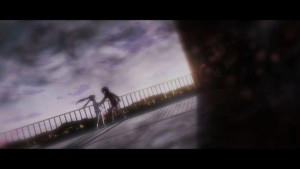 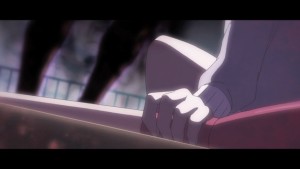 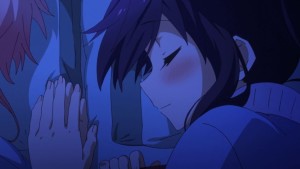 Both the opening and end sequence of this episode focus on Kurumi being troubled by a recurring nightmare of a terrible experience she had. When she joined the school before the zombie virus outbreak began she had a crush on a boy who was part of the men’s running club and joined the club herself (I assume as a manager). Unfortunately, it seems her first encounter with the outbreak of the zombie virus happened when she was alone with her crush and who transformed right in front of her eyes and started shambling after her to eat her. She was noticeably shocked, backed away, fell down and her hands came across the shovel she carries around everywhere now (they were on the rooftop and if you remember from last episode the gardening club had their garden beds up there) … and killed her now-zombified crush with it. She periodically has this nightmare recur to her, and it literally startles/shakes her awake in fear and labored gasping for air. 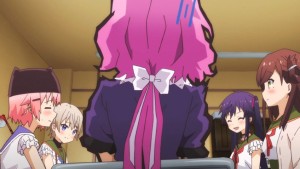 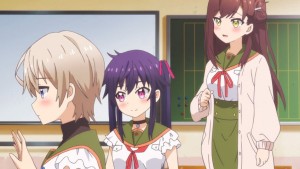 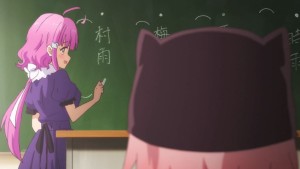 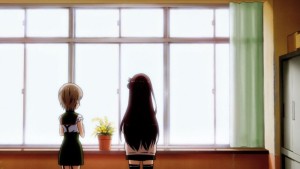 Kurumi’s focus is not the only content for the episode, of course. Another focus looks to be the verification that the “Megu-nee” that Yuki keeps referring to appears to be a figment of her own imagination. The manga shows that she was a person everyone knew in real life – a teacher at the school they all attended and are now holed up in – and apparently Yuki was fond of her. In some ways the anime is presenting it in a way that looks like Megu-nee is almost an externalized “coping mechanism” for Yuki, that part of her down deep knows that she is in a dangerous situation, and whatever event(s) happened to her that caused the break from reality she is still dimly aware of it. It is Megu-nee who teaches her in the classroom (I wonder what if they will show that from an “outsider’s perspective” like they did the classroom in the last episode?) and who also in a strange sort of way “protects her”, as we see later on in the episode proper. The three other girls also “interact” with Megu-nee when Yuki does directly – for example, if Yuki directly thanks Megu-nee the other three thank her as well – and they do this fully in the knowledge of Yuki’s separation from reality, but also in an odd way showing care and concern for Yuki’s extremely fragile condition. Miki, as a late arrival to the group, still has misgivings about it, but goes along with it for the moment. 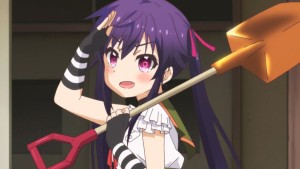 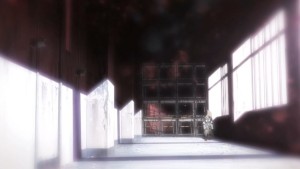 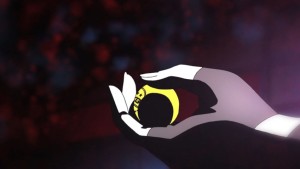 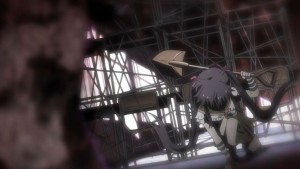 Apparently each of the girls have their own “area” of responsibility. Last episode we saw that Yuri takes care of “home matters”, such as keeping track of supplies, cooking and gardening, while Yuki “attends classes” (which in some way may be understood to be just keeping sane). Kurumi, though, is the “soldier” of the group – she checks out the security of the place every day, and, as we saw in this episode, periodically goes after the zombies to kill them and protect everyone … assuming they are single in number, I guess. Perhaps her decision to do so in this episode was made in the wake and memory of her recurring nightmare she’d experienced that morning, but whatever the reason she pursues and hunts down a zombie of a high school girl (presumably the same one seen at the end of the last episode) hanging around outside the desk barricade.

Just before she is about to do the deed she sees that the zombie is still carrying around a photo of herself and her boyfriend, which gives Kurumi brief pause, reminding her of the once human state these creatures used to be in. But only brief pause and pain, as she dispatches of the zombie in grim fashion with her shovel. In the manga itself Kurumi was moreso presented as someone a little more hard-boiled, possessing grim resolve for most of the time (though not unflappable), so for me it was kinda nice to see the anime go out of its way to show her as a little more “human”, still possessing weaknesses, and presenting her a little more rounded out as a character in introducing her. 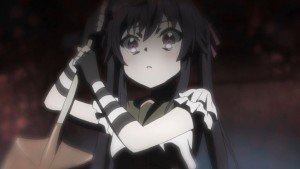 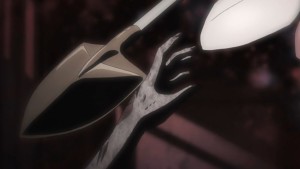 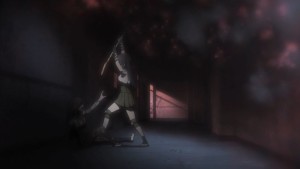 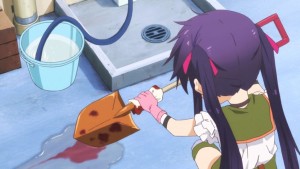 In many ways the girls really are in a near-ideal situation in terms of being in a safe place, provided for with utilities still, and even having access to both the gardening plots and the food stores (both literally in the in-school store and the storage for the cafeteria foods, I’d guess) that remained in the school. Even so they were shown eating “rations” … do they periodically go out on “raids” outside of the school? I wonder if schools themselves would have an emergency store of food rations for unexpected situations? In any event the fact that they were eating “rations” was hinted at last episode and mentioned at the beginning of this episode as well, so when Yuki in one of her inspirations/discussions with Megu-nee decides to have a “test of courage” the other girls (Yuri in particular) decides to use the idea as an occasion to also raid the school store for a few more things and also to go and gather some books from the library. They do this at night, and emphasize the need for quiet and for using as little light that could be seen from the outside as possible – apparently the zombies are extremely basic, primitive thinkers, and simply react to sound, movement, light, etc. by being drawn towards whatever is making it. 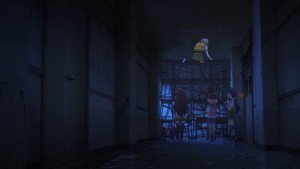 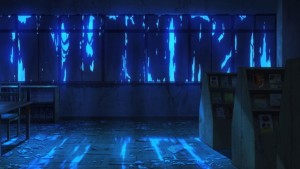 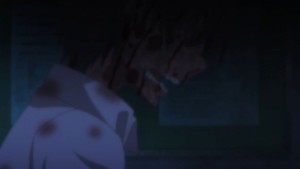 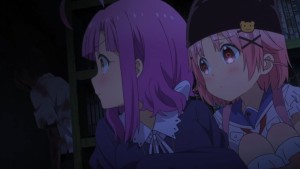 Everything goes well until they get to the library and Taroumaru begins showing fear out of the blue. Everyone proceeds inside, and while Yuri is gathering some books for math lessons she suddenly sees and hears out of the corner of her eye that there is a zombie in the library. At the time Yuki is in another part of the library (with Megu-nee) and chalks it up to just being a ghost that came out during their test of courage. Interestingly, Megu-nee is shown sitting next to Yuki, who immediately stops moving and goes silent and sits down on the floor in a crouch (apparently a wise move to do). At that point the zombie’s attention is distracted towards the other survivors who bring it away from Yuki and into a more open area where Kurumi ruthlessly beheads it. Perhaps unsurprisingly, that night Kurumi has the nightmares recur to her once again, but moves closer to Yuki (who is sleeping next to her) to help her calm down and feel “‘human warmth”, a good symbol of perhaps another aspect of Yuki’s task. She is abnormal, yes, but her cheerfulness and love for the others is definitely human warmth.

The series continues to be downright excellent with very good adaptation choices made, I feel. For those of you who noticed there were differences in last week’s and this week’s OP sequence as well that really helped drive the setting of the series home more. I wonder if they are going to do that every episode from now on? For those who are interested, here is a link to some of the differences in each of the OP sequences side by side: http://i.imgur.com/3kBfRAH.jpg Oh yes, special thanks to Takai from random c dot net for the screenshots this week – I have been down with a nasty cold and just throwing this post together was more tiring than expected. -_-