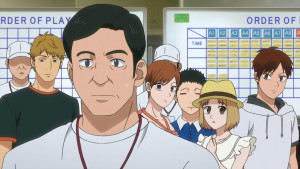 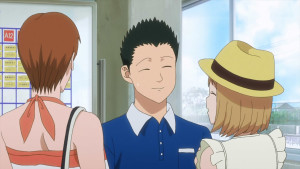 A pretty good setup for Maruo’s match against Ide. I almost started off by saying Ide’s match against Maruo. Just get that feel that Ide is trying to basically take over main character status. He really is the man who brings a storm. Ide is just at the center of everything and certainly has a powerful charisma about him. The kind of athlete that everyone just likes. You could just see him being the most popular player in any team sport. Definitely a crowd pleaser in terms of personality and the fact that he can ride that energy to bring his game up to another level. A very different player than Maruo who is the real main character here.

I kind of wish this was a case where Maruo was being more selfish. I mean your opponent isn’t going to be on time….forget generosity, go get that ticket to the big event XD. Ide didn’t have to stick with that kid. Passing him off to the ambulance staff was entirely what he needed to do as someone coincidentally there at an accident. I get being a nice guy, but when your own life is being decided there is a need to consider what you really need to be doing. The issue is that it’s hard to be selfish when you have this saint acting like a hero. But I think playing the villain would have been a good move considering that he needs this win. Maruo showed up on time, give him the default win. You don’t decide a match based on purity of heart. The world does not give exceptions due to trying to be a nice guy. The only benefit is that Ide should have less stamina in the long game after running that whole while. 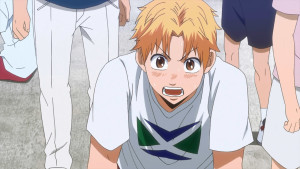 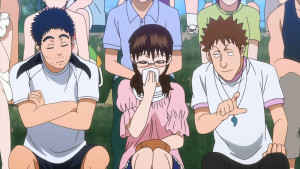 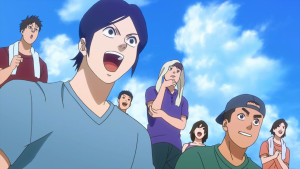 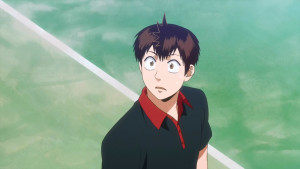 I think the best part of this match being animated is just how you can feel the pressure Maruo is facing much better. Actually hearing the roar of the crowd and how overwhelming they are is different from just reading a lot of people saying things in the crowd. It’s just so overwhelming even Kageyama feels pressured to stay quiet about Maruo’s strong plays. It really is like being the handful of fans of the away team in a crowd. You want to cheer, but it takes overwhelming confidence to do so when you are literally surrounded by people who want the game to go in the opposite direction from you. Good luck getting anything from Sasaki even if she was at her emotional best. This is going to be such a hard test. Ide is a very good player and he’s got the emotional boost he needs from the start. Ei-chan is going to need to play his best game ever in order to win.

Of course that side of things is a bit too bad for Sasaki….but honestly it was expected. She had two years basically to get used to this idea. It’s been clear for a long time that she had no hope at all. Going to his matches was a nice gesture, but wasn’t ever interpreted as more than being a good friend. She just never made a move. I suppose you can’t blame a person for being emotionally shaken when the news comes, but that’s life. It was obvious to everyone that this was going to happen at some point, just a matter of time. 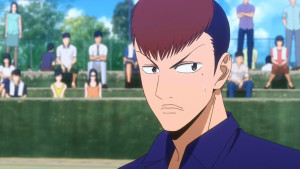 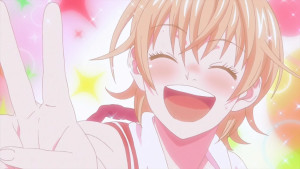 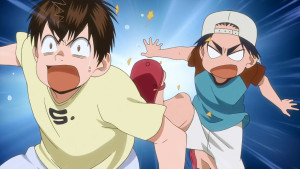 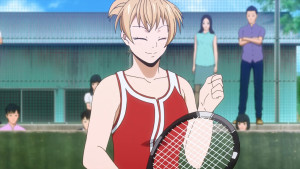 On that note it is awesome just how Natsu is such a different kind of person from Maruo and others. The romance for her is 100% positive and is actually bringing up her game. She just crushed her first round opponent almost entirely on an emotional high. She would have won anyways, but it was just that much easier because she’s completely on fire right now. I think it’s certainly ok for Maruo to treat “everything” as including him. Love power and fighting power may not be connected for most, but I think Nat-chan can basically turn everything into her strength. It was also fun seeing the team have some fun with this good news. Some of them surprised they weren’t already dating XD.

Hard not to gloss over Maruo’s first opponent….he wasn’t bad but he was just a stepping stone. It was nice to add a bit of a twist to the match with him getting a growth spurt and Maruo having to erase and toss all the data he had out the window. It slowed him down early trying to read this guy when he wasn’t doing what was expected. Once Maruo cleared out the old data and started to take in new information he pretty easily picked this guy apart. I feel for him, he’s being matched basically against a seed player in round 1. Maruo is just constantly not being in the right ranking due to his inexperience. 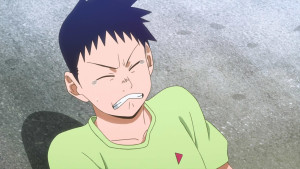 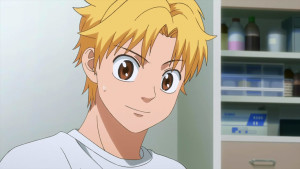 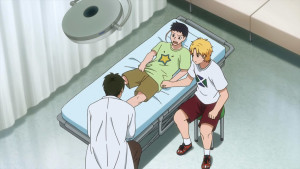 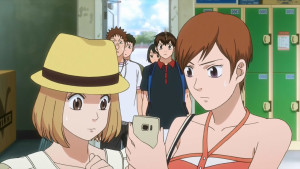 The changes were a bit interesting this time around. Mostly just the fact that they show a lot of what happened to Ide instead of just mentioning it. After all the manga normally sticks pretty tight to Ei-chan’s point of view so he’d just hear about the specifics in that case. It wasn’t a bad thing to get to see what happened and see the kind of guy that Ide is.

The only questionable part was how this kid being hit by a car was almost being treated like he had an upset stomach. Would they just leave the victim of being hit by a car resting casually in a waiting room? That probably is the kind of emergency that you immediately pull doctors for. I mean sure it is kind of needed so the kid can keep holding Ide’s hand and thus prevent him from getting to his match on time….but it seemed a bit weak. Like “come on kid you didn’t suffer food poisoning, you were hit by a car!” Then a single doctor pops in, no support staff or people looking him over in general and says “oh you need surgery.” For a show that focuses heavily on realism in tennis….they kind of cut corners in the medical field. I’m not a medical expert but if doctors were this casual in Japan….I’d never want to get injured there. Again it seems more like they knew where they needed the plot to go “Ide promising this kid he’ll win” and the story just ignored reality on its path to getting there.

In some ways I think the manga version was better since any oddities in how Ide ends up late or makes that promise are lost in how second-hand the information Maruo gets is. You can imagine there are just facts he is missing. 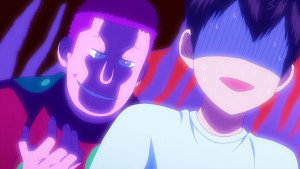 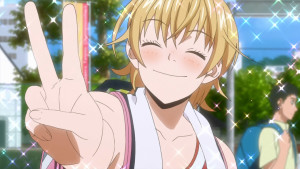 A good setup for the match against Ide. It’s going to be a very tough one for Maruo. The crowd was just shockingly loud when you compare it to every other episode we’ve seen so far. This was like the kind of crowd you’d have at a baseball or hockey game. Good luck to him since he’ll have to go up against his first taste of professional life and an excited crowd. Sadly he can’t use it as a positive since this is very much a home crowd and he’s the away player. Heck he’s basically the villain in the hero story of Ide. The evil notebook kid who is standing in the way of Ide’s glorious rise to the top. I can’t wait for next week and seeing how Maruo just deals with this kind of opponent.
Score: B+