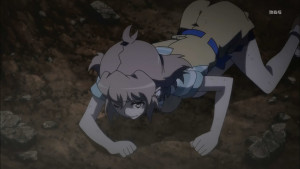 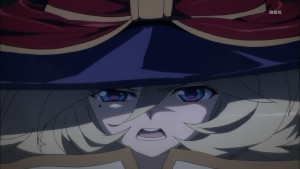 I’d say this episode was much more of a mixed bag in comparison to episode 1 which was all positive. I wouldn’t say this show is without flaws or plot weaknesses, but it was a bit much this time around when it came to Hibiki herself. The big question of how she’d get out of her pinch last episode….she doesn’t. She just tanks it and gets knocked around. Luckily the boss of the new villains is a weakling that can’t kill someone who isn’t even wearing symphogear. Sure the attacks were flashy, but Hibiki isn’t even fused with a relic anymore…..if that didn’t kill her then it didn’t have much punch to it.

I was more lost on where this character arc came from for Hibiki. Since when was fighting against people some unbreakable rule for her? This is the girl who leapt into the fight against Fine in season 1, and in episode 2 of last season tried to punch Maria who was hiding underneath her cape shield. I didn’t see any huge issues with arming to defend herself in those cases. Sure, she in general liked to talk things out with people, but she never had any issues fighting back before. She tried to talk it out with Chris in season 1 before stepping up and fighting her. It just seemed like a series of bad decisions from Hibiki this episode, even worse than when she was using her gear while knowing it was dangerous to her very life. I mean pretty safe presumption in that situation that this person is connected to the fire that nearly killed people….might be a smart idea to defend yourself before she kills you, civilians, or your friends. 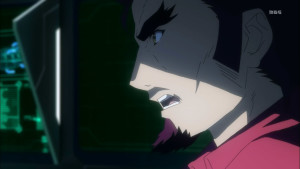 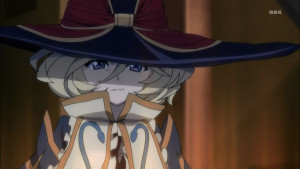 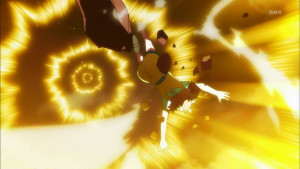 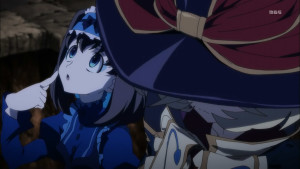 The one bright spot with Hibki this episode was bringing her father into it. He was basically not mentioned in the first two seasons. We got a good picture of what life was like for her mother and grandmother after the big attack at the start of season 1, but not much mention of her father until now. Should be an interesting focus on fathers with her and Carol. One of them having a pretty strong connection and mission that grew from that connection and someone who really doesn’t seem to have any special message or anything left to her. I do hope someone smacks Hibiki around for being an idiot. Sure, in hindsight it was a good thing she didn’t fight with the anti-gear Noise being used, but I don’t think Hibiki should be rewarded for the fact that her dumb decision had some positive consequences since in all honesty she should be dead at this point.

The downside to a character as awesome as Genjuro is that the excuses for not having him fight the antagonists are usually pretty weak. The “we need you at the command chair” argument is just face palm worthy. Just get up and sit in his chair….it’s not that hard. That group isn’t even doing anything other than narrrating the action. Hardly something so important they can’t send someone who could basically beat up all the Autoscorers without breaking a sweat. 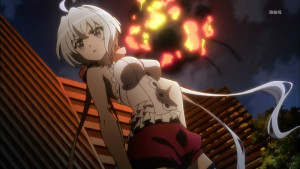 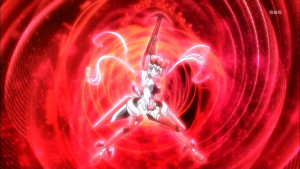 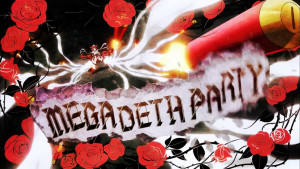 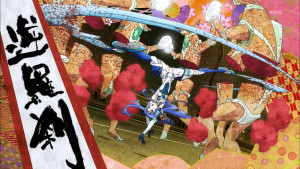 Now getting to the real positives, let’s just move on to the rest of the cast XD. The fights for Chris and Tsubasa were pretty entertaining and was nice that we got both their new songs in this episode. Much like the second season I expect it will take some time for these to grow on me. Yukine’s song was somewhat drowned out by the commentary going on at the same time and Tsubasa’s was a bit less combat oriented than I might expect from her. But it picked up pretty well so that was fine. A good amount of action with Tsubasa taking on those Aranoise. She of course was fine until it was shown that those things can do damage to gears. I can’t imagine they’ll be completely destroyed, though may take some time to get fully repaired. What Elfnein has in her possession is probably the key to either upgrading the gears to be resistant to that stuff or giving some outright replacements, though I’d be surprised if they went the latter route.

Got the fight as well with Chris and Leiur. Some fair praise that Chris does have the greatest firepower of the group and a naturally high phonic gain, but the issue is that these autoscorer are pretty darn tough regardless. A completely different source of power and weaponry compared to the symphogear. Plus they are taking on a threat that knows what kind of weapons they have at their disposal….not a good thing. The fight was pretty flashy and we can see what kind of power this coin tossing woman has at her disposal. It’s not just a range issue, but rather some kind of ability to manifest some kind of giant when she gets pissed. Anyone tossing boats around is kind of an issue. 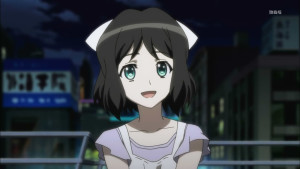 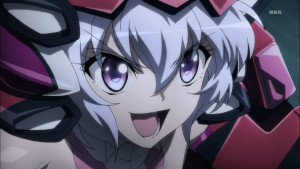 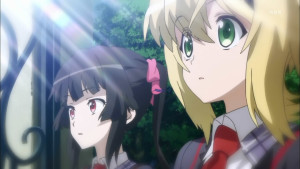 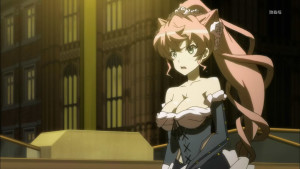 I guess it is going to be time for Maria and company to step in as backup. All three of the main cast are out of commission in various degrees. Linker or no linker they really do need to get into it. Can have Shirabe and Kirika back up Chris while Maria can help get Tsubasa out of there. Kind of funny how it was Chris in the flashback that gave Kirika and Shirabe so much support in school. Though certainly fitting since she was in very much the same position last year, maybe a bit more isolated since Tsubasa is a third year and Hibiki a first year so Chris being in-between kind of had to navigate school life (a pretty foreign thing with her background) on her own.

One odd thing was Miku being kind of evasive about where she got the keys to Yukine’s place. I mean…should it be that hard to just say they are friends and she gave her a spare key? Just seemed a little bit strange. If she is being honest and doesn’t remember when and where she got the key….even more odd.

OP [Exterminate] by Nana Mizuki: (A-) 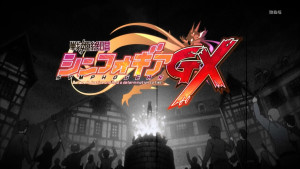 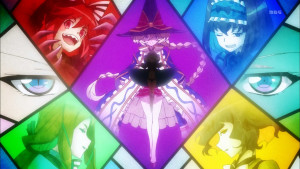 The OP was pretty solid and definitely fitting in with the quality of the previous ones. Having Tsubasa’s VA covering that song and giving some interesting visuals. A good focus being on Carol’s power and a mysterious weapon that probably is connected to what Elfnein has in her possession. The noise that we saw there did have me wondering what was going on until we got to the later point in the episode. The matchups we see in the OP probably don’t matter since they didn’t exactly match up in the real show when it came down to it. Still, it does promise some fun action down the road and we’ve already seen a bit of what can be expected here. The most interesting part of the OP though may be with Chris using what seemed to be alchemy near the start of it. With her and Tsubasa getting their gears sniped it may be that they will use alchemy to kind of replace them in form and function. 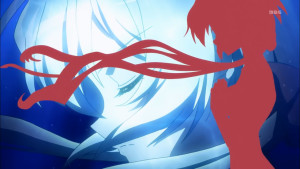 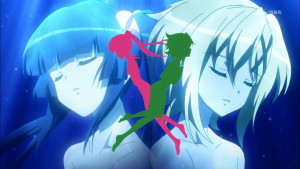 The ED of course is being sung by Yukine’s VA as per usual. An interesting visual affair. A lot of drawn out scenes with individual or groups of characters. The ED like most seems to have Kirika and Shirabe just paired up for their moments. It does make me wonder what trouble is in store for Chris this season. She just seems to always run into these emotional journeys considering her past and temperament. I thought it was a pretty nice song as a whole. A lot of focus on reflections, prisms, water, etc. Not sure if it will tie into the story at all, but it’s an interesting ED. 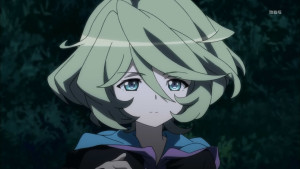 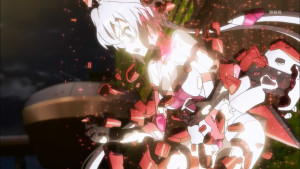 So, in the end I feel like this was a step back from the first episode. While Hibiki has had issues fighting people, she hasn’t been this stupid about it. When she knows her friends are fighting and there is someone who has literally just attacked her….it seems completely baffling to have her refusing to even defend herself and nearly getting herself killed out of pure stupidity. The rest of the episode was fine though. Good to see an enemy willing to take shots directly at the gear system itself since without it they are pretty well helpless. It also creates opportunities for other characters to step in and assist. We’ll probably get a few action scenes with Maria, Shirabe, and Kirika and then just deal with the aftermath of this even and planning their next move.
Score: A-