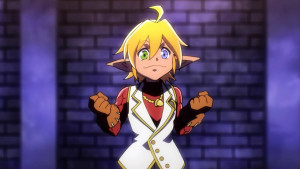 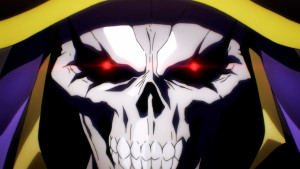 This season so far has had its share of interesting concepts. Some of the shows out there are tackling familiar kinds of stories and settings that we have seen before. But, some of these shows are putting little twists on the standard that makes them worth checking out. Overlord isn’t a show that I expect will challenge for best of the season, but the setup has me intrigued and looking forward to seeing how it will unfold. I don’t expect I will fully blog this, but I still wanted to get my thoughts out on a show that did catch my interest.

I think the most interesting aspect of this is the focus on the relationships with (former) NPC characters. We’ve seen the idea of people being trapped in a game or trapped in a world with game-like elements before. But in those cases a major focus was on the player base. People looked to friends and guilds and had those avenues open to them. Here the main character is much more isolated. There may be other players who were trapped, but so far none that he knows and thus his connection to them isn’t there in the first episode. After all he doesn’t even know what is going on so he can hardly speculate about whether there even are other players who got pulled into this. In a sense the only people that are around him right now are those NPCs. 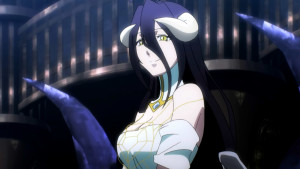 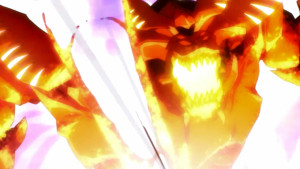 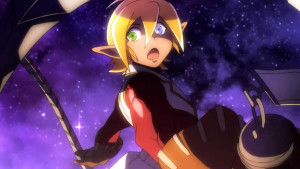 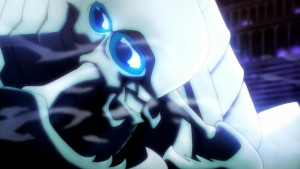 The character dynamic should be interesting because of how it forces Momonga, not simply to be a player trapped in a game. He has to play the role that the guardians and members of his guild expect from him. Those individuals behave and think according to their backgrounds that were pre-made, but from this point on who knows. If they really are alive then they can change. He can’t afford to show weakness or confusion like a person trapped in a game normally would. There is the need to keep up appearances and act like a respectable leader. Things could change for the worse if he shows his true self, but they could change for the better. The twins showed that while they expected him to be this scary person, they didn’t dislike him being contrary to expectations.

At some point he’s bound to show that side of himself. It will be mentally exhausting to play the role the whole time he is there and living worried about how far their loyalty extends. Not sure about saying how he is a player from another world, but perhaps just showing more of his real personality. After all in this state….he is Momonga. He can live as himself, just in a different body from what he grew up in.

In terms of the cast I like the current setup. I do understand dislikes with the situation with Albedo and how he basically set her up to be in love with him. But if they handle that right, then it should be fine. That’s just the basic setup, personalities and interests can change. Plus he knows what he did so it does make it more complicated. The interesting point will be when he stops seeing them purely as NPCs that were made by his fellow guild mates and more as individuals. My favorite character so far was probably Aura. Just a fun character and full of energy. I give props to someone so hyped about fighting a monster like that. Should be a good source of entertainment with this cast. 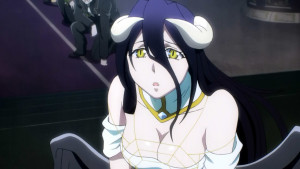 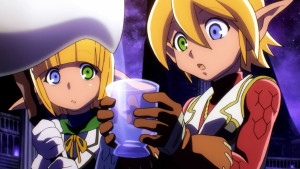 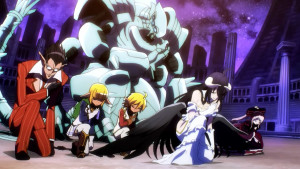 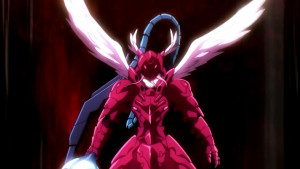 Another curious thing is that Momonga is in a very different position than most characters in similar shows. First, he isn’t human. He isn’t simply a strange kind of humanoid, he’s a living skeleton. That’s…pretty unusual. Plus he is this very powerful being, with a legendary weapon, and lives in a dungeon. Momonga has a ton of firepower at his disposal with his own abilities, but also all the guardians. His guild was set up as this kind of last boss kind of situation. One that was so powerful that no one had ever even gotten to his last line of defence. That says enough about how strong the guardians themselves are. This guy basically has a ton of power and his own army. He could live pretty peacefully in his new home or he could set out upon the world. There is so much freedom for where he could go. He isn’t limited by needing to chase a way out or gather a power base, he already has more than enough power.

I think as a whole it is the situation that is as interesting to me as any. Momonga himself is a decent MC though not heavily interesting at this point. A guy who clearly managed to live with his hobbies and balance things out with working a full time job. Someone who wasn’t particularly satisfied with his regular life which may explain why he was the only one who was willing in his guild to stay to the end. The rest of this guild chose real life, but he….couldn’t go that far. Though it’s not like he wasn’t living in the world. His very guild was set up so only people who were working and living in society could join. You can see his anxiety, but also being quick to try and figure out his situation and what it all means. 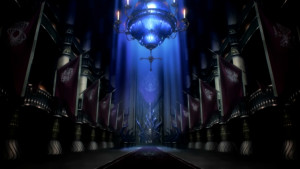 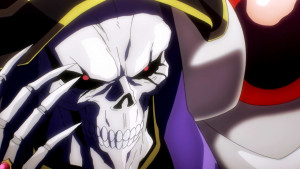 I would say as a whole it was a decent introductory episode. It set the situation up nicely and did give you some insight into Momonga’s personality and his situation. I wouldn’t say the OP or ED were all that special, but they got the job done. What I am curious about is where the show goes from here. I think the relative lack of impact of the opening episode itself can be taken care of going forward once the story gets rolling. The situation itself is pretty interesting to me and I’ll be curious to see what happens. There is no simple goal for the MC to pursue here, but rather he can go in a number of directions from changing the world with the power he has or simply living quietly and defending himself against attackers as they come. It may not be an amazing show, but I think this could be a fun ride.
Score: B