Few series for the Summer season have left such a consistently elusive after effect on me both before the series began to air and after as much as Charlotte has, and that makes talking or writing about it extremely difficult at times. There are so many factors in this series that I enjoy – the writing and music of Jun Maeda, the animation of P.A. Works, the involvement of KEY, etc., etc. … and yet somehow even after the first episode I still can’t get a “read” or overall feel of the series. 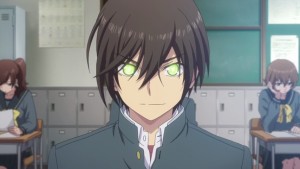 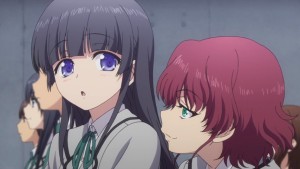 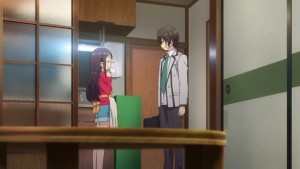 The series premise thus far is fairly straightforward. All of the sudden (perhaps because of the influence of a large comet that was shown flying over the earth one evening) a few apparently randomly selected young men and women developed “super powers” overnight, and it seems not more than a few of them used their newly found powers to create mischief on a petty level. Interestingly the powers seem extremely restricted and limited in their practicality, but also are miniaturized relections of the mind and heart of their wielders. The main character of the story is definitely an example of someone abusing their powers, but it periodically goes beyond mere mischief. He is shown, in fact, to be a self centered jerk, and periodically engages in behavior that is downright frightening. 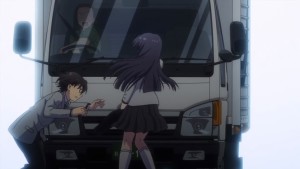 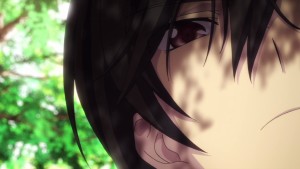 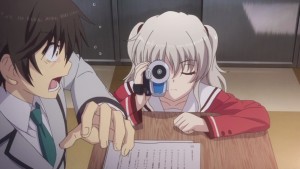 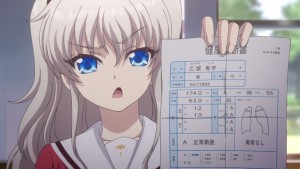 His ability is essentially to be able to possess another person (as a ghost or demon might possess someone in fantasy literature), but only for five seconds. He uses this ability initially to do things like ogle a young woman’s body while in that body, possess a member of a group of delinquints and cause one of them to punch another as hard as he can out of the blue, cheat on tests by possessing the smartest members of the class and memorizing their answers, and in the height of his scumbaggery using his powers to “trigger a flag event” with his high school madonna in order to start a relationship with her – essentially temporarily possessing a truck delivery drive, making the vehicle swerve out of control directly AT the young lady (!), and then “saving her” at the last minute. And sure enough, the young lady is grateful, and apparently had been physically attracted to him some time ago anyway, so the artificial catalyst “works” … at first. 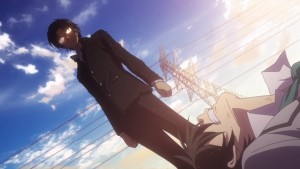 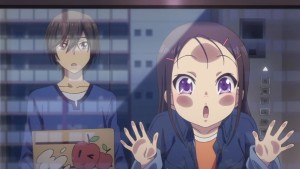 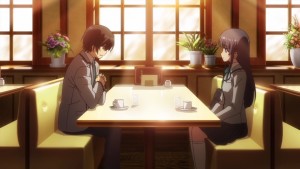 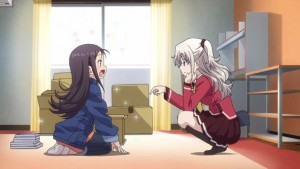 Fortunately in the midst of his assinine activity he is stopped and exposed by others – these happen to be other young men and women who attend a recently made private school that collects these recent super powers endowed young folk and keeps them under tabs. Apparently the powers are supposed to go away after a few years…perhaps being linked with the maturity and inner state of their wielders even more than it might appear at first. The main character is made to transfer to the new high school with his extraordinarily upbeat, astronomy-loving younger sister and they settle in near the end of the episode, where we also are shown that apparently they come from a broken family…something which will most assuredly be developed in later episodes.

For the moment there is much that is still unclear for me here, and at the moment I do not anticipate blogging the series, but it could easily go the route of self destructing or turning into orecisely the sort of work by Maeda that I enjoy. I will definitely be watching future episodes with curiosity and interest if nothing else!