Before the Summer 2015 season began one of the more talked about series I had heard about was Gate: Jieitai Kanochi nite, Kaku Tatakaeri. So, seeing as the source novels were difficult to peruse I took up the manga adaptation of said novels, which were held by readers of the novels to be quite faithful adaptations, and I found the chapters that were available up to that point to be a pretty good read. The first thing it reminded me a teensy bit of was the lighthearted anime Outbreak Company from a couple of years ago – an anime I enjoyed. While it apparently it reminded other people who came to the “Gate” source material for the first time of the same thing, the “fans” of the Gate series vigorously insisted on Gate as the older of the series, and that Outbreak Company was a variation on it chronology wise. 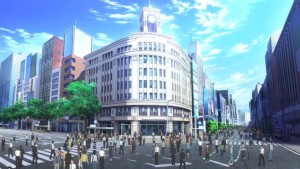 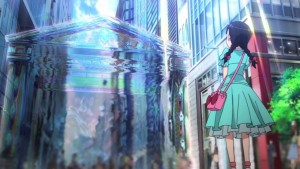 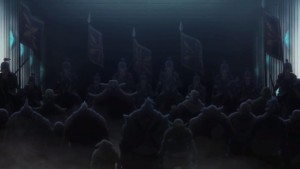 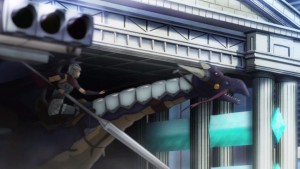 The broad outline of the story is fairly simple – one day in the busiest part of downtown Tokyo a “large dimensional gate” appears in the middle of the street, out of which pour fantasy like monsters that look like orcs and ogres, behind which are a large number of Roman Empire looking foot and horse soldiers as well as soldier riding small flying dragons. These forces begin indiscriminately slaughtering everyone and everything in sight. The main character of the series, an ex-soldier who has an interest in otaku culture, acts very quickly and is able to help the crowds take refuge in the nearby Emperor’s palace shortly before the more heavily armed Police and military arrive and effectively slaughter the invading forces. After receiving an award for his quick thinking and level headed actions, the main character is dragged back into the military and is sent as part of an expedition with a fair number of other members of the military through the gate into the “alternate world” … and the story takes off in earnest from there. 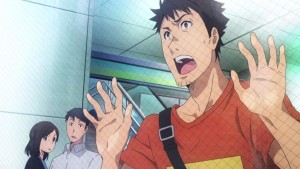 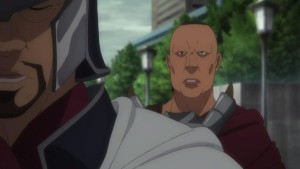 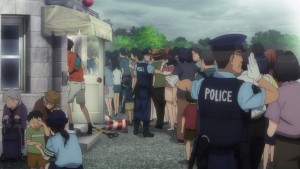 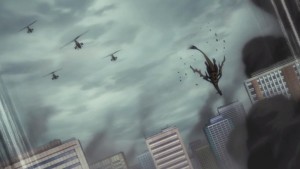 Readers of the source novels and the manga have generally voiced similar criticisms with the adaptation that I had. Firstly, there was too much emphasis placed on the Otaku hobbies of the Main Character – far more than was shown in the novels or the manga … and while that could be an understandable choice in my opinion for people being introduced to the franchise for the first time through the prism of the anime adaptation, I sincerely hope it will not be overemphasized in future episodes – his hobbies are only the most visible “surface quirk”, and do not reflect the main part of who he is as a whole (at least in my opinion).

The second criticism was the toned down violence and gore involved with the initial invasion on the people of Tokyo. Part of the purpose of the intensity of the descriptions and imagery was to show how serious it was. Casualties easily numbered in the 5 digit range (the place where the gate appeared is possibly the most densely populated in the world in day to day traffic), and horrible things like the invading army planting a flag of conquest atop a huge pile of human corpses really drove home the seriousness of the numbers killed. Without that seriousness the response of the Japanese government’s military forces came across as rather heavy handed to some who were new to the franchise. While such directing decisions could be understandable on the one hand (this is for television viewers, after all), on the other hand I felt it detracted a bit from the gravity of what happened. 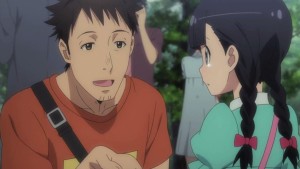 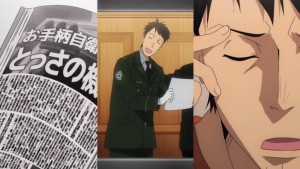 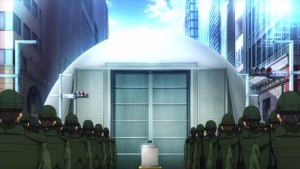 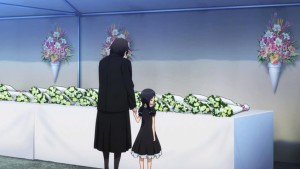 Even with these “side criticisms” of the anime itself there is one other aspect of the franchise as a whole that concerns some, and that is essentially how many feel that the author wrote it with “anti-European” sentiments in mind while glorifying and idealizing the Japanese military – essentially a sort of “ultra-nationalism”. While I did not read the series and necessarily feel the anti-European sentiments at first (though in retrospect I could see where those uneasy about such elements are coming from), I did, however, definitely see the aspect of the over-glorification of the Japanese military and a propagandish nationalistic bent to the material. And those are very unfortunate things to emphasize, in my opinion.

In some ways the above elements are a pity, for the series itself could stand quite nicely on its own without adding in the extra touches to drive the point home in the heavy-handed way the source material does. Whether the anime adaptation will do the same thing has yet to be seen. However the series itself is an enjoyable one if seen solely in the sense of a modern military going into a fantasy type setting. There are light hearted and humorous elements, yes, but there are also extremely serious ones touched on – and I should say that while this is mainly done in the alternate world it is also done in the real world of Japan as well (not to delve into spoilers). Some of the most enjoyable aspects of the series involve the members of the Main Character’s unit meeting other people from the other world as well as some of the aspects of world building that come along, and I look forward to seeing them as the episodes progress. 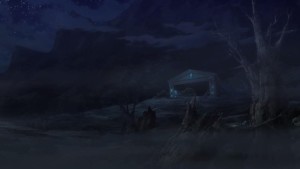 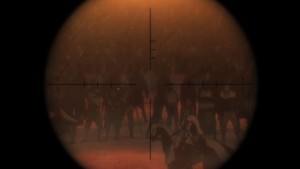 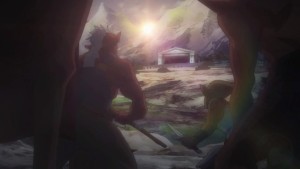 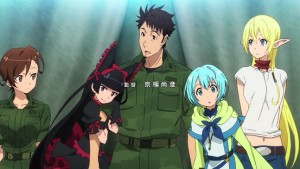 To be honest this is not a series I could foresee myself blogging. The general tone of the series is more of an “enjoying the ride” type of feel, and the series is also set for two cour. The first episode itself was very meticulous in its adaptation – an approach I generally like, although I did not like the all the additions and omissions that were chosen. Even if the meticulous adaptation method adopted in the first episode stretches through future episodes, though, I think what will make or break the series will in fact be those very elements it feels necessary to add, remove, or emphasize. It could show itself to be quite enjoyable, and seems intent to make itself a bit more palatable to viewers. Whether or no it makes good choices in this will be the litmus test for its success or failure as far as I am concerned.

Once again, thanks to Passerby from randomc dot net for the screenshots – many of which were shamelessly pilfered for this post. ^^