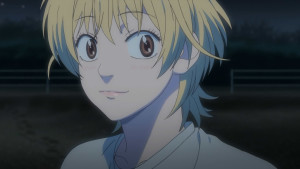 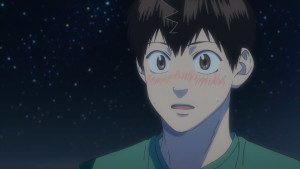 So we finally reached this point. One thing I really appreciate about Baby Steps is that it does push things forward in terms of the story that aren’t simply about tennis. In a sense enough time has been spent on building up this relationship with the barrier being the fact that no one ever managed to confess. Maruo came the closest after returning from Florida, but past that point he never really pushed to create a chance to do it. But finally the one person you could count on to break the status quo did so. Nat-chan simply decided this was the perfect moment and went for it.

It probably came down to Nat-chan realizing how much time has passed. In the show it has been 2 years since they first met. That’s a pretty good amount of time to build up a relationship. At this point she knew her own feelings and she had already heard Ei-chan attempt to confess. From that point of view there was no reason for her to not just go for it. This wasn’t like the other time when he was fishing for her feelings without giving anything up himself, she knew how he felt and was making the step forward on her own terms. 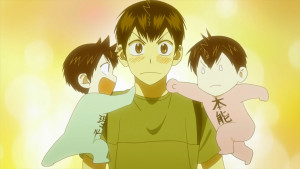 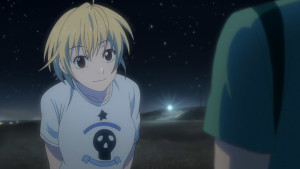 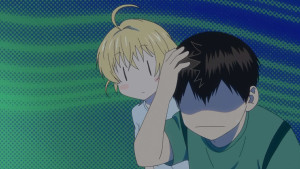 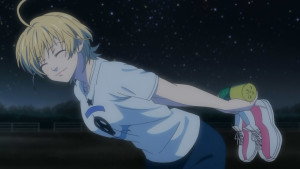 Of course the nice thing was that Nat-chan wasn’t simply stoic about the whole thing, she was clearly embarrassed but still willing to do so. After all she was confessing to someone she had liked for quite a long time, even knowing he felt the same way had to be quite the moment. I just really appreciate that she went for it, not relying on logic but simply her own feelings. If we simply left it up to Maruo then we could be waiting till another season to see any development between them.

I can understand his feelings to be sure. If he falls short here it could make their relationship tough going forward. But there will always be worries and considerations going forward. Who knows how long he’d go before being tempted to make that move. But luckily that won’t have to be the case. Natsu managed to make her move and change everything going forward. I think it’s a great move even if it comes at a very crucial time for Maruo’s tennis. To know that he has that relationship going should be considered a motivator going forward. No more worrying about missed chances, but now getting to focus on the whole relationship that has opened up thanks to this.

It was a funny moment when he was just completely blown away by her confessing and lamenting that he missed his chance. I agree with Nat-chan that it doesn’t matter who said it so long as the important things were said. But she was gracious enough to let him have a do-over so he could get to say his side of things, though Natsu couldn’t help laughing at the silliness of it all after that happened. Plus both sides managed to get out their appreciation for the other. Nat-chan constantly helping Ei-chan out and giving him the support he needs to get past things. But it goes both ways. Natsu gained a lot of energy seeing Maruo just working so hard for 2 years and getting so close that she enjoyed his victories as if they were her own. Now they can both focus on the future instead of being stuck at this in-between point that wasn’t quite a relationship even though they both were interested. This was the moment I was hoping we’d see in the second season and have been looking forward to. 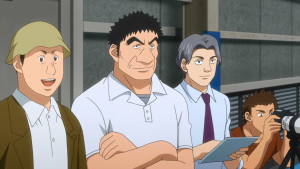 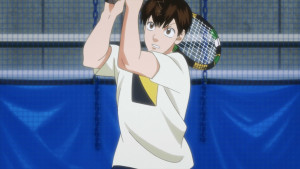 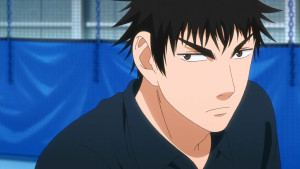 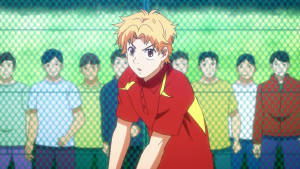 The rest of the episode was of course important. Setting up Maruo’s biggest trial yet. Ide is going to be a monster and Maruo knows that. He’s done all the prep work he can, but he faces an opponent who can energize the crowd and be energized in turn. While Maruo can appreciate the crowd, he isn’t the type that simply relishes in the attention. It will be a tough match ahead, but he’s got to win these first two matches no matter the cost. This is also a competition pretty far from home turf so it will be a bit of an unusual experience for Maruo in general. He’ll have to be ready for anything unexpected that could occur. And of course the key is to win as much as humanly possible both for this tournament and beyond.

The match against Takuma was also a good one. It shows that people all grow over time. Takuma has gotten better which allows him to keep his lead over Maruo, but Ei-chan is making up ground with his incredible growth. He couldn’t break Takuma and so he never had a chance to win, but he pushed it really far in the second set once he had all that data. The key going forward may be gathering data faster since he can’t afford to constantly play from behind. Maruo has done all the prep he possibly could do for this tournament and so he’s pretty prepared for it. The match against Takuma was a good way to show his growth, put him in the eye of more media individuals, and simply to give us an update on him. If he can push Takuma then he has a chance against a large amount of players. 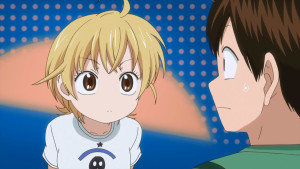 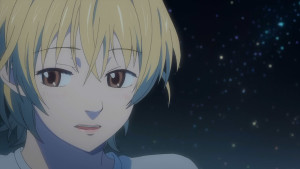 Of course for me this episode will be remembered as the confession episode XD. The rest of the episode was important and enjoyable, but that was the golden part of it. A lot of reminders from his friends and parents that this is the crucial point. He has to get far enough in the Kanto tournament to make the All-Japan Junior and he has to win that tournament or it’s all over. The pressure is going to be insane, but he’s got to find a way to reach it. While his emotions may be a bit unstable due to this new relationship he has going, he does now have an even stronger support going forward. So many of the things he cares about are wrapped up in tennis so that gives him reason to push ahead. Here’s hoping for some incredible matches and episodes going forward.
Score: A+