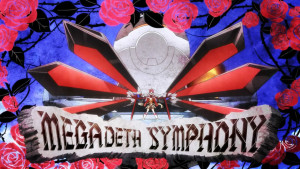 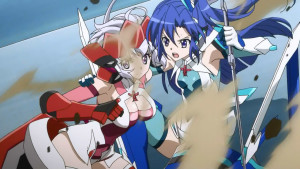 That was definitely the kind of first episode I was hoping for Symphogear. This show is at its best when it is doing things that are downright crazy and doing so in an over the top way. I mean just the first 5 minutes of this episode was amazing. It was both hilarious and just plain fun. I mean first they have shuttle trouble for the group that went to recover Professor Nastassja’s body. She of course died near the end of the second season making sure to get the moon back in proper orbit. What occurs after this point is probably the perfect way to come back to Symphogear.

First they naturally launch our main trio into the atmosphere in a rocket XD. They of course then use all the thrust they have at their disposal to slow down the re-entry so the shuttle doesn’t burn up. That of course is fine…but then they are about to crash into a mountain XD. So naturally the only thing to do is blast a hole in the mountain and then rocket themselves through the opening! This coming thanks to Chris using Hibiki as a platform so she can fire the missiles without falling off. Then comes the part where they have to cut down a forest so they can get through, avoid more rocky terrain by either blasting the hills or redirecting themselves through the course, and then comes the town! The only choice at this point is for Hibiki to jump off the shuttle and then throw it over the building before they crash into the biggest building in the town. Thank you Symphogear, that was truly fun. 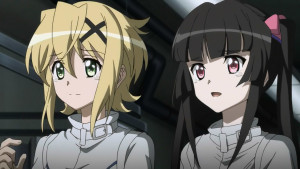 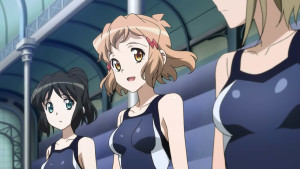 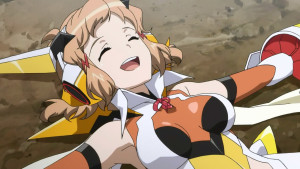 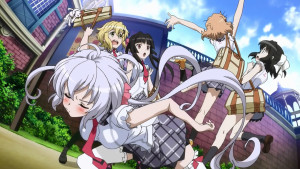 This was a good return to the show I feel. They just jumped right into things and used the first part of the episode to tie off things from season 2. They recovered Professor Nastassja’s body so she could be put to rest and not left to rot up on the moon. They also covered Kirika, Shirabe, and Maria obviously having to deal with legal consequences from their own actions. But they could then skip ahead and over all the international relations business. Division 2 has gotten much bigger standing in the world thanks to what happened, Kirika and Shirabe can attend school, and even Maria is able to return to being an idol. Although it isn’t like there aren’t any consequences from what happened. Clearly Maria is being watched over, no matter what they want to call it. She may have ended up as one of the heroes who helped save the world, but she was also a terrorist so….mixed situation there.

The school situation was fine. Chris was kind of pushing the tsundere to the max there, but I guess someone had to keep all the yuri-hints from going too far. I think she could only take so much of Kirika and Shirabe and Hibiki and Miku goofing around. There was a bit of heavier stuff at the pool though. Again going over Hibiki’s family situation. Her father being dead and really just having her mother and grandmother in her life. Presumably parent’s visiting to go over their kids grades and such. In Hibiki’s case her mother can’t take time off working so her grandmother will be stopping by. I’m curious if we’ll get to see her since parents on the scene could be a source of danger. Of course Chris doesn’t really have any family to speak of with her parents dying when she was a kid and we don’t really know that much about Tsubasa. Though you’d have to think with her being basically lent to a government institution…maybe she doesn’t exactly have family to speak of either. 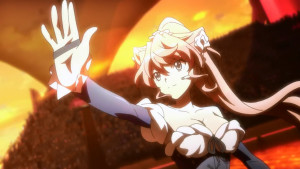 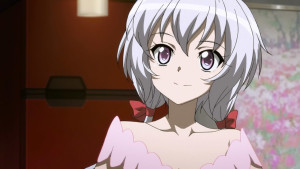 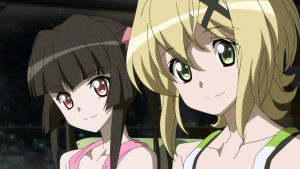 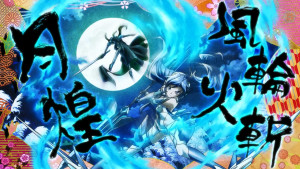 The customary concert in the first episode of a Symphogear season went great as always. And for once the concert itself wasn’t attacked which was a nice change. Also an interesting contrast to the first concert with Tsubasa and Maria. That was a bit more tense, while this was a lot more fun since neither of them are enemies any longer. There was the obvious difference with that being more about fire and this having a much more fun water theme. Also throwing in a space motif made for an interesting concert. It was just more fun this time around and definitely a visual spectacle. I’d say the people at that concert got their money’s worth on this one.

Things got pretty hectic after the concert with various attacks being launched against the cast. We have this one girl who has been chased down by the coin firing woman (weird weapon to be sure) who I presume Chris is dealing with, Hibiki facing off in a vulnerable state against her own opponent after going on a rescue mission, and Tsubasa having to come to the defense of Maria. Though it does seem like Tsubassa was the real target. That attacker was pretty darn varied using swords, kiss of death, and even reflecting bullets. Tsubasa really had to pull out a serious effort to even knock her back. That fight isn’t over yet either so should be interesting to see how things turn out. 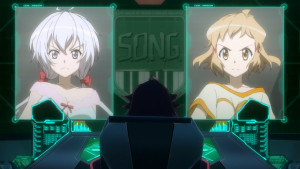 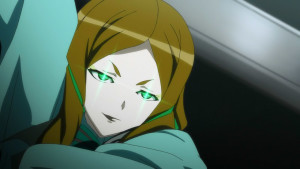 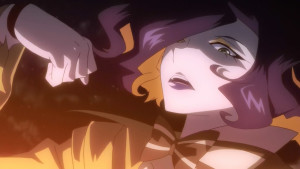 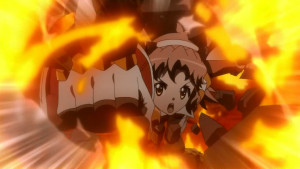 Of course they found ways to limit things. Maria in her position can’t freely carry her relic around and Kirika and Shirabe can’t fight without a dose of linker and that permission isn’t going to be easily given. It does allow for some tension since Hibiki is clearly not in a good spot there. Interrupting the flashback of Carol. Toss her into the group of Symphogear characters with pretty darn tragic backstories. Carol seeing her father I presume burned at the stake….geeze. Seems like she pretty effectively twisted up her father’s message of her going to see the world and turning into a destructive mission for herself.

We did get to see Hibiki’s new transformation sequence and her new battle song. Can’t say much about the lyrics yet, but it was a good new song. Seemed full of energy and fitting in nicely with her first few songs. Very fitting as well for Hibiki to have some cliche martial arts film sounds and moves at the end of that sequence. She was taught by the OP Genjuro who also seemed to pick up much of his moves from movies XD. Also just fitting to have Hibiki not fighting, but rather jumping in to rescue people. She does have free hands so that probably is a good plan in general. It makes sense that they would transition the Symphogear users to general rescue fighters since the noise are no longer an issue after the end of season 2. 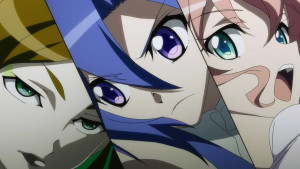 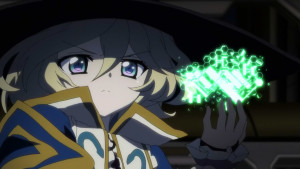 This was definitely the way I wanted to start the summer season. This episode was just packed with content and action. It sets up the conflict with the new enemy and also clears up the aftermath of season 2 which was necessary. Symphogear isn’t the kind of show that will be considered one of the greatest ever, but I do enjoy the series. This first episode was everything I enjoy about this show when it comes to good music, fun action, and just continually moving the story ahead. We got to hear Hibiki’s new song and some hints at where this season will go. I’m looking forward to this. I wish it was already next week so I could be watching the next episode and see what will happen. Glad this time I have time to blog Symphogear which I didn’t during the first two seasons.
Score: A+