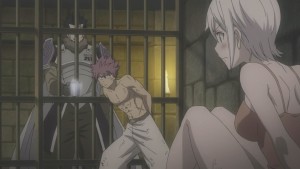 Well then… Things are going about as expected so far, and we’re fast approaching the point where the surprises end and the story settles into some epic battles. If anything, I’m a bit surprised at how quickly things are heading right into the meat of things, but I guess that’s the true value of this arc, where things are just going right to where it feels good. 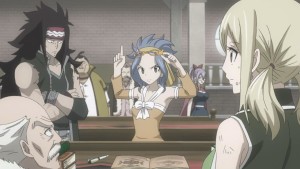 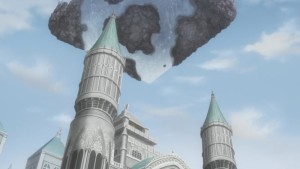 The big surprise this week was the fact that Tartaros flying fortress pretty much came right to Fairy Tail. There’s no need to mobilize forces or go toward an enemy that’s just frigging right above you. And yet, things definitely continue toward making things rather bleak for Fairy Tail.

For one thing, I’m about ready for the Erza torture scenes to stop. This week was particularly brutal, and made me cringe. I think at this point its been established that Erza’s in a pretty horrible situation, and I don’t see the need to constantly remind us of that. That said, I’m sure all this anguish is going to lead a pretty satisfying moment when Erza rises from ashes. For now though, I think I can do with the rest of the torture happening off screen. 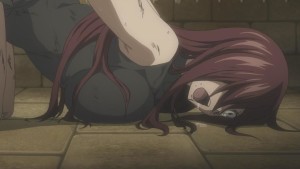 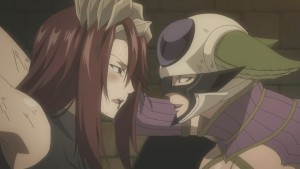 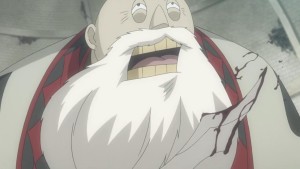 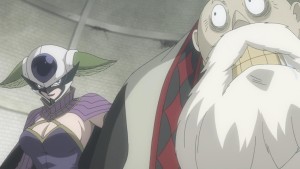 Speaking of satisfying moments, how great was it to see the frigging former magic council chariman kick the bucket this week. If there was an irredeemable character that Fairy Tail’s shown, its this guy. And beyond just being a vile scumbag, the guy is pretty stupid too. What did he think was going to happen when he put the key in himself? If I was dealing with a bunch of human hating demons, I’d at least be a bit less trusting than this guy. Well the reward for his stupidity was immediate death, and it did help set Tartaros’s plans back a bit, so that’s a win all around.

We also got to our answer to the little Elfman Dilemna. I’ll be honest, I didn’t care much about this scene as much as I should’ve, due to being spoiled last week. A few people had questions as to why I wasn’t happy about comments regarding the whole Elfman thing. Let me explain… The anime made it seem like Elfman was actually “choosing” to sacrifice Fairy Tail for Lisanna of his own free will, rather than just being mind controlled. The fact that it wasn’t spelled out was what made this such an interesting scene, one that I was looking forward to learning the truth about. 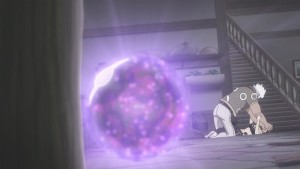 From what I know, this was pretty clear cut spelled out in the manga, but it wasn’t so much here, and that ruined the frustration I would’ve felt for that scene. I do think that Elfman simply being controlled is a bit of a cop out. It would’ve been a lot cooler if Elfman had tried to sacrifice all of Fairy Tail for his sister, and then we’d get the ramifications of all of that later.

I’ll also ask, no urge manga readers to be very very careful about what they confirm or deny or hint at in the comments. If it hasn’t been shown in the anime, or confirmed in the anime yet, and we’re close to it, then just wait. Wait until that whole storyline is resolved so you don’t end up accidentally spoiling the story for those of us who only watch the anime. Please… I don’t want to have to look through the comments with fear that I might be running into spoilers. 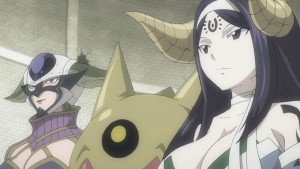 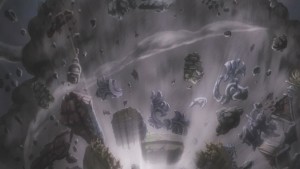 But… That whole issue with Elfman aside, the whole scene still pretty much destroyed the Fairy Tail Guild building. Now, I’m sure no one actually expected the entirety of Fairy Tail to die there, so its plain as day that they’ll be back. But its pretty obvious that Tartaros has done more damage than any previous opponent has… ever. This war just got even more personal for Fairy Tail, as they just got attacked and had their Guild Hall reduced to rubble.

That’s what the episode ended on, so it’ll be obvious that next episode we’ll get some traction for the big conflict between Fairy Tail and Tartaros. The other major thing that happened was Jellal. 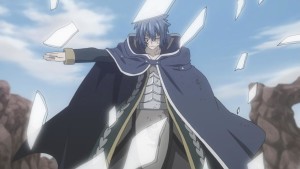 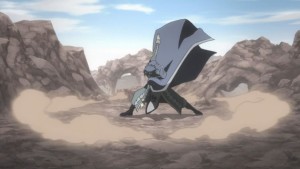 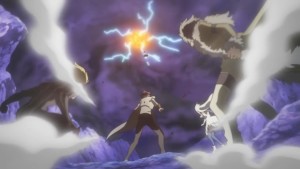 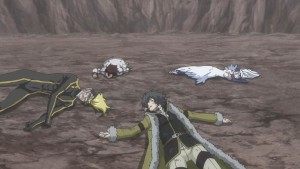 Maaan… Jellal is such a friggin badass. Oh and since I rambled on about spoilers, thank you for not having spoiled on that whole Zero/Brain thing. The fact that Zero didn’t actually revive, but was a midnight nightmare was not something I expected. It was just extremely badass to see Jellal not only see through it, but own the entirety of Midnight, Cobra, Angel, and the rest of Oracion Seis.

What an amazing finish too! That attack. Man, I didn’t have that high of an estimation of Jellal before, but he’s got a fair chance of being a thorn in Zeref’s side. And the fact that Oracion Seis is now part of Crime Sorciere? Wow! 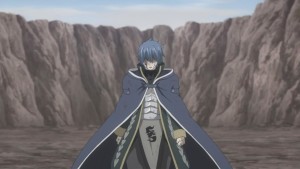 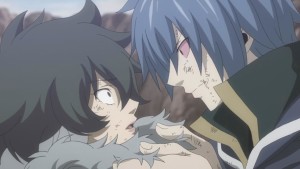 I mean, I guess that that might happen, but it was still cool to see it happen. Now Jellal has damaged his eyes, but expanded his guild significantly. It’ll be awesome to see Crime Sorciere join the fight against Tartarus. Not to mention the potential character moments we can get later down the line, as each member of the new Crime Sorciere has some ties to Fairy Tail or one of the other major guilds.

Speaking of other major guilds, we had some new characters introduced this week, alongside some returns. Minerva debuted in her demon form, and there’s also the new Tartaros member Lummy, who seems to be an underling of Kyokas. In a rather nice twist, this is a bunny girl that’s very much all about the hot guys XD. And of course, we had the return of both Tempesta and Jackal. So its confirmed that every one of the Tartaros demons can be regenerated, not just Temepesta. Lets just say Fairy Tail’s going to have quite their work cut out for them in the upcoming battle. 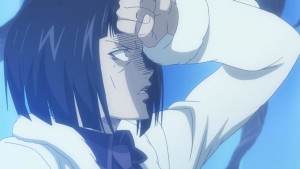 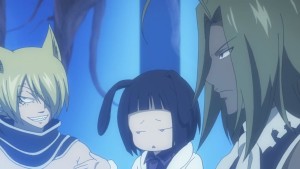 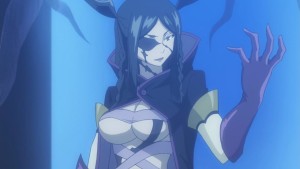 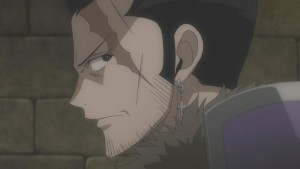 Then the last little bit of business is the whole thing with Gray and Silver. I was of the mind that Silver was related to Ul and Ultear, not Gray directly. But the constant hinting that Silver “smells” like Gray suggests something different. I’m quite surprised, and a bit confused. Weren’t Gray’s parents killed when he was a kid and then he was taken in by Ul? I guess we’ll find out eventually (no hints regarding this at all, PLEASE!).

So the stage is primed for the big battle between Fairy Tail and Tartaros, especially with Face more or less ready to be activated. Its going to be a tough week long wait till the next episode… 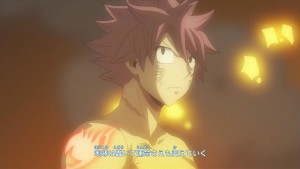 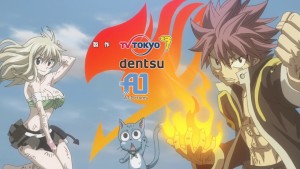 I really really liked this OP. Yes, it spoiled some things, but nothing too drastic for me, (or maybe there’s stuff I haven’t noticed yet). This OP features some sweet animation, and I’m pumped for all the battles we’re going to get. I’ll avoid discussing everything the OP showed, because we’ll get to it in due time (and I urge the comments to steer clear as well).

Also that song, its another win. Man, Fairy Tail just seems to kill it more often than not with these OP themes. This one seems even more custom made, with the words Fairy Tail in the actual song. 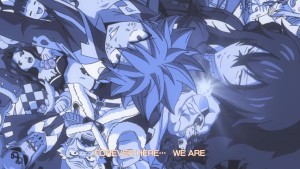 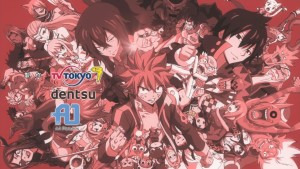 Not as impressive from an animation stand point (its just one artwork being rotated and zoomed in and out of) but the song is pretty sweet. If there’s one thing that Fairy Tail’s always been good at, its the music, and this is another Ending Theme that just works. Solid stuff. 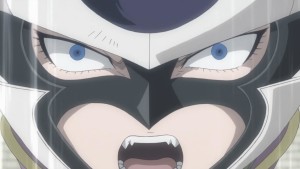 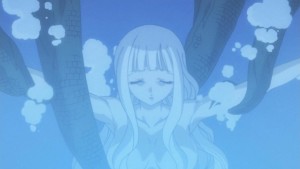