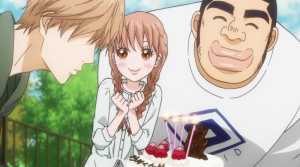 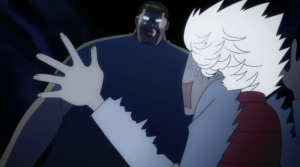 There are really 2-3 stories this episode, which would make it feel disjointed if they hadn’t smartly tied them all together with a through-line: Takeo enjoying his newfound financial freedom by treating his friend and girlfriend to fun times. The first story is my favorite in terms of sheer enjoyment, as Takeo and Yamato giddily take Suna to the movies and up to the mountains, a day trip which turns into a surprise birthday party and naturally ends in a Yamato-baked cake. 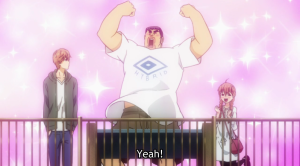 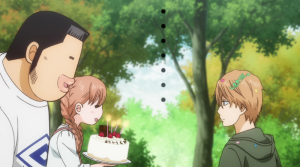 It doesn’t really tell us anything we don’t already know, other than that Suna is a lot more socially awkward than he first appears, as he struggles to express his feelings and even seems a little upset at himself for not guessing at Takeo and Yamato’s plans. He’s also much better at noticing things about others than he is about himself, a fairly common trait in observant introverts, I think.

But he’s clearly touched that they’d put so much thought into giving him a special day, and the whole scene really just reminds us how much these three care about each other. If moe is meant to evoke a desire to protect someone, then OreMono may just be the most moe anime of the year, as I would like to swaddle all three of these characters in blankies and keep them from ever getting hurt ever ever ever. 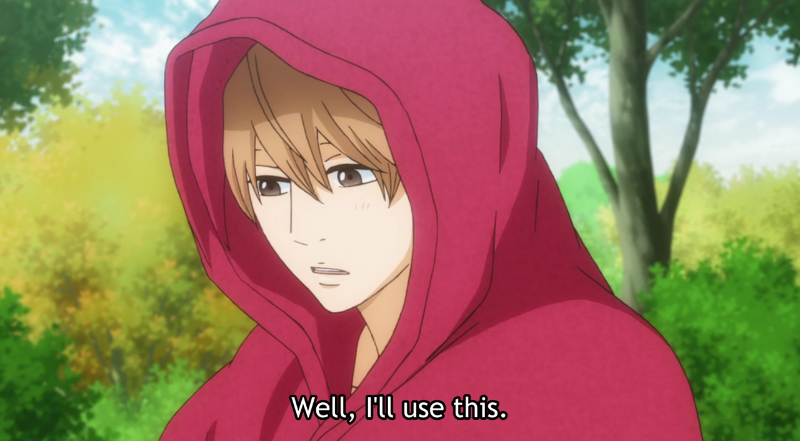 And on my tombstone they shall write: “Death by sweetness. Consumed too many Suna-min Rolls.”

But our relative peace is about to be disturbed by the arrival of Oda Hayato, a Sunakawa look-alike (plus beauty mark) with a massive crush on Ai who’s come to find the guy who’s stolen her heart. On paper he comes across first as smug, then pushy, and then sort of pathetic, but the great Namikawa Daisuke imbues him with a hapless charm that keeps me from wanting to throw various kitchen appliances at his head.

While he spends far too much time meddling in Ai’s affairs and threatening the happy cloud of hearts hanging over Takeo and Yamato’s heads, I’ll give him credit for possessing a fair amount of self-awareness, as he at least acknowledges his own issues and weaknesses along the way. It’s also kind of great that he loves Ai because she doesn’t cut him any slack or find his ineptitude endearing. Plus, I mean, I didn’t like Ai at first blush either, so I’ll withhold judgment until next week’s trip to Totally Not Tokyo Disney, at least. 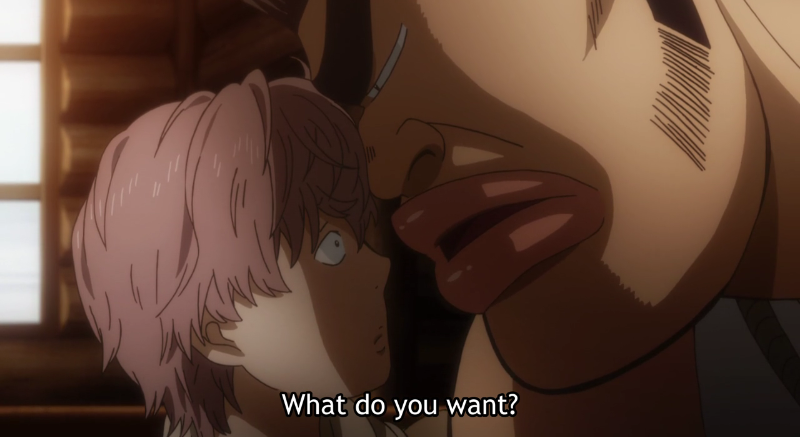 This love story ain’t big enough for the both of us, pilgrim.

While I find Oda’s methods overbearing, he’s also not wrong about Ai’s inability to move on. OreMono is a very pro-communication series, all about figuring out how to express your feelings to others. Directness and honesty is lauded here, which aren’t really traditional Japanese cultural values, hence why the characters are so often caught between what they want to say and what they feel like they should say.

I’ll be surprised if this arc doesn’t end the same way the others do: With a character speaking their mind and feeling better because of it. Hopefully it will be on Ai’s terms instead of Oda’s, and cause minimal angst to Takeo and Yamato along the way. 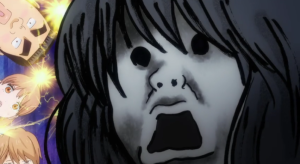 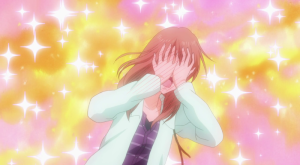 Since this episode is about 90% set up for whatever payoff we’ll be getting next week, I don’t have much more to add at this point. So to wrap up, here is some Other Stuff I Liked This Week:

And that’s all I got! See you guys again next week when we all go to Totally Not Tokyo Disney and things get full of awkwardness and Feels again!