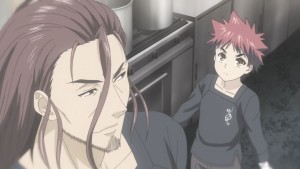 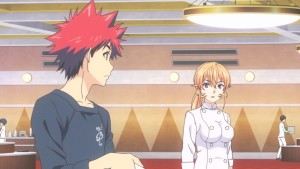 Well now… That was quite a lot of eggs there. Shokugeki no Soma’s Summer Training camp arc continues on, this time focusing on a breakfast cooking episode featuring eggs. Its also at this point that we’re starting to see the chinks in Soma’s main protagonist armor. Until this point, Soma’s been mostly dominating his way through every challenge with little problems. It does seem, however, that things are beginning to shift to a new paradigm. 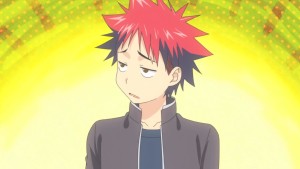 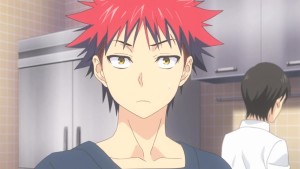 I think the very interesting vibe from Soma this week was that of being slightly passive. He doesn’t have that fire to him that he ussually has, and it seems like he’s still reeling from the “defeat” he suffered last week. I think that this is an interesting way to go, because its starting to give Soma a bit of a character arc, something that he’s been lacking since the start of this series.

It is interesting that slowly but surely Shokugeki no Soma is just tackling all the things that have made it a pretty generic, unoriginal show, and its paying off in spades. 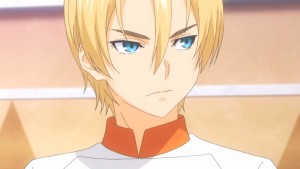 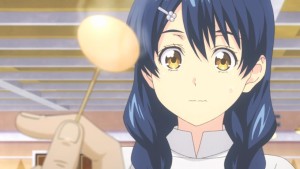 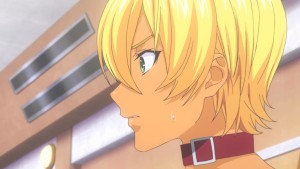 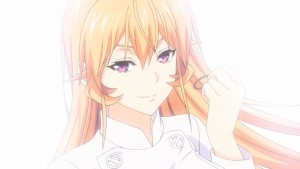 For one thing, the amount of rivals and general cast of characters is pretty darn large. And given that Totsuki’s a pretty crazy place, we’re starting to see that Soma might be a bit out of his depth. Is he talented at cooking? Sure, but he lacks the vast knowledge about food that isn’t related to diner food. Its his one flaw that really sets him behind the pack.

I won’t call the cliffhanger at the end of the episode surprising, the whole episode was hinting and building up to it. Its clear right now that Erina, Takumi, Nikumi and even Megumi are pretty at home with the latest task, to make an innovative buffet breakfast dish that features eggs as the primary ingredient. 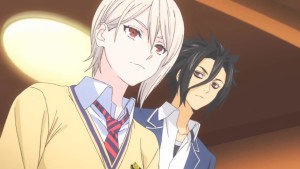 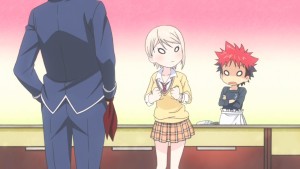 And beyond those, we’ve got two new characters. A white haired girl and the scary looking Ruffian behind her. In a rather interesting change of pace, we haven’t been given their names and titles yet, but I’m guessing they’re part of the Elite Ten of Totsuki. So Soma’s got some serious rivals and enemies already, with more brewing in the corner.

Combined with the latest infamy he’s gained for the whole Megumi Expulsion Shokugeki, well… He’s got a lot of eyes on him. 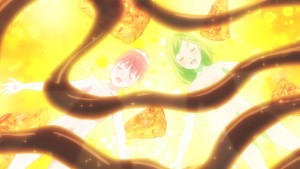 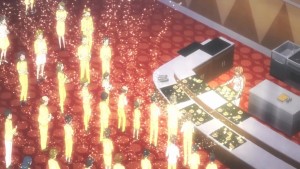 And while the first half of the episode was mostly setup for the upcoming challenge, the second half was mostly every one of Soma’s rivals/friends getting their customers/judges to react in absurd ways, in class Shokugeki no Soma fashion.

Its great to see how diverse and different each character and their cooking style is. Whether its Takumi’s showey Salad Fritta, or Megumi’s oden they’re all pretty solid and successful works. Erina’s definitely the star, not only does she make a pretty impressive Eggs Benedict but she also finishes her 200 dishes first. 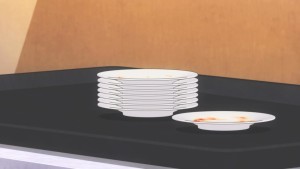 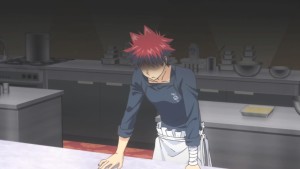 As the rest of the talented students attempt to catch up to her, everyone’s wondering about Soma, who hasn’t gotten to even ten servings. Between him and that white haired girl, it seems that something more is happening than meets the eye.

The question is where Soma will go from here. Will he pivot and change mid competition? Is he going to fail? Its all pretty hard to predict. And its pretty great that Shokugeki no Soma is able to be unpredictable half way through the series. It means we’re in for a good time next week. 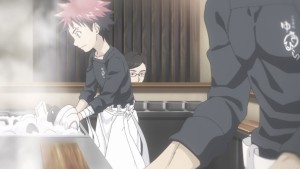 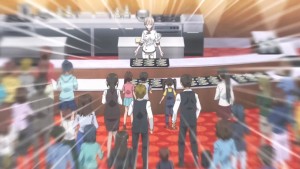 Metamorphosis eh? I’m curious to see what happens next week.