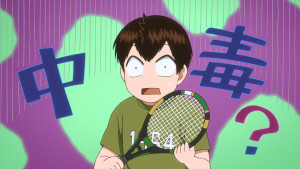 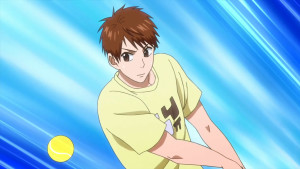 This was another good chance for Ei-chan to train and pick up skills in preparation for the biggest matches of his life so far. He’s really in for it with the schedule they showed here. His first match of course is against a fellow non-seed player, but the big thing is Ide. We only saw a brief glimpse of him, but this is someone that Nabae even said he wouldn’t want to be in a close match against. This is a massive hurdle. Maruo basically has to topple someone near the same level as Araya if he wants to continue the path of going pro. It’s still a few episodes off, but you can feel that this match will be extremely important. Whether he can come out of this on top or not will leave mark.

There was other big things going on of course. The group training was a great move by Aoi and the other coaches. What Ei-chan is lacking more than anything right now is experience. He just doesn’t have enough match experience and that hurt him against Araya. He could play to that level, but he had to overwork to compensate for not understanding how to play against a left-handed player. Playing against a ton of different players will be beneficial. Even bringing Iwasa over to help. Here is a guy that is very good at the exact thing that Maruo wants to reach. He wants that kind of control based tennis that will let him handle every ball and put it where he wants. Of course it’s not that easy since Iwasa isn’t a technical type, but an artistic one. He works on instinct and draws his paintings on the tennis court. 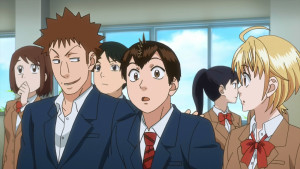 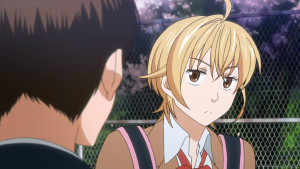 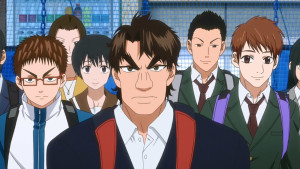 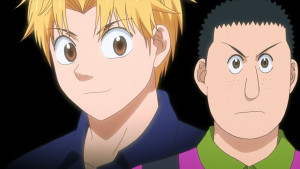 The first part of the episode was good for a reminder that the pressure is on now. Maruo is in his third year of highschool, time has gone by. It’s getting closer to the promised tournament. Mauro’s performance at the All-Japan Junior is going to impact his future. While the majority of students are focusing on exams, Ei-chan can’t do that. If he does it means he’s failed and has to change gears. You can feel a bit of distance growing at this point as well. Kageyama and the rest are all in different classes and focusing on their own future. Ei-chan and Natsu are very distinct from the rest of their class. They have their own goals and those aren’t the same as the rest. Although Ei-chan did kind of miss on parts of what Natsu was saying since he was still just in awe of her XD. Also a bit of a sombre moment as he had to ask himself that question. If he fails can he really stay around Natsu? Everything is just tying together at this point. I can’t blame him for being worried that if he can’t go pro then he doesn’t just lose a dream that he’s been desperately chasing, but he loses the person that he wants to walk that path with.

The training portion of the episode was good. This really was an excellent chance for all these players and shows that there is a good sense of comradery amongst them. Sure, they are rivals and they will get intense while playing against each other it doesn’t mean they can’t get along. Everyone gained something from this, it is just that Maruo may have gained more than most. The best way to get practice and experience is to play people on similar skill levels and that is hard to do just within your own team. All the players could gain something from that and it was a nice break after the intense Araya match. 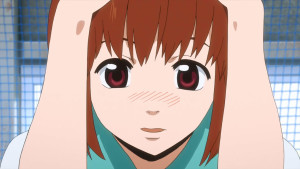 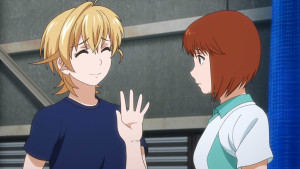 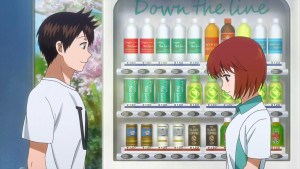 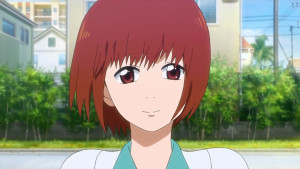 Of course you can’t ignore the Ei-chan-san and Aki scenes XD. This is kind of a level up in terms of rivals in comparison to Maruo’s classmate. In that case the line was that Maruo is getting deeper into tennis and that itself drew him closer to Natsu and away from girls at school. But, here is someone that while not part of the STC….is in the tennis world. Of course there hasn’t been any real sign that Ei-chan is interested in her like that, but enough to conclude there is something on Aki’s side. I think it works since it gives Nat-chan a rival in love and a rival on the court. Nothing big came out of that encounter, but it would be something to keep an eye on.

Honestly I do feel for Aki a bit. Of course I don’t want to see her with Ei-chan or anything, but I can sympathize with her overall situation. Here is someone that seems to be a victim of the sports parent. That parent who exposed their kid to a certain sport from childhood and kept with them the whole way. You’ve seen plenty of star players in various sports that have grown up with the game from 6 or 7 years old. Aki has the natural talent for it that allowed that to turn her into this powerhouse tennis player. But you get the impression that she didn’t just build up a deep love of the game along the way. It is like she said, her whole life has been tennis. She didn’t play with friends that much, she didn’t pick up other interests, it was all tennis. That made her a great player, but it could mean she’s suffering on the inside. Does she want to play tennis for the rest of her life?

It does make you wonder where they will go with Aki’s character. Is she the type that will throw away tennis to try and find things she loves even if they aren’t things she is great at? Will she find a love for the sport and continue on? Will she take a more middle path where she stays good and keeps playing, but is allowed to branch out in her personal life and become a more well rounded person? I think the potential for her character is interesting since it’s a bit more uncertain than most of the side-characters in the show. Hopefully interacting with people like Maruo and Natsu who have chosen tennis and love the game will help Aki be more up front with her mother about her feelings. Since I honestly don’t think her mother realizes how emotionally underdeveloped she’s left her child because of the way she raised her. There was no malice, but I think her mother has gone too far from too young an age with Aki. 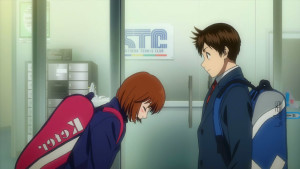 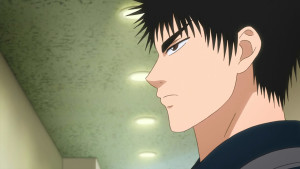 As a whole this was a good episode. It wasn’t a busy episode, but it had some good moments. These are the episodes that are important for Maruo. The training and preparing for the biggest matches of his life. The next episode should be good as we move right into the next tournament and some pretty important matches. Ei-chan is back into win or it’s all over mode here. Will even get a practice match against Takuma to help get him fully prepared for what is ahead. Should be a good episode coming up next.
Score: B+