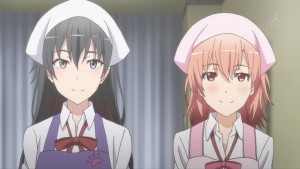 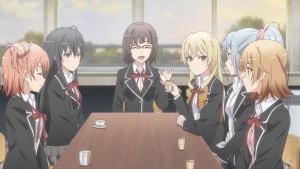 I’m truly at a loss for words, because that episode was just… odd. I really have no idea what is going on, or happening, or where we’re headed. As a penultimate episode, this week’s showing really did create a combination of hype and uncertainty not to mention just general confusion.

Valentines day is soon upon the cast of characters in Yahari, and with it, I suppose the ultimate battlefield for affections and love and all that. And its developed pretty nicely too, there’s a genuine sense that both Yukino and Yui are actually intending on doing “something of note” and soon.

Or are they? That’s where the episode kind of gets muddled and confusing. There’s this weird push and pull, a passive aggressiveness to the whole episode that makes it difficult to pin down.

At one point, Hikigaya asks Yui if she’s got a few free days coming, to which she gets happy and then says she’ll think about it. What does this thing mean? Is Hikigaya making the first move? Is it for something else entirely? But there’s that whole flashback to last season’s Valentines day.

And then there’s the spark flying chemistry between Yukino and Hikigaya, that we see amidst the whole chocolate making event. The chemistry that makes Yui pretty darn uncomfortable at that.

And of course, then there’s the prodding by Haruno Yukinoshta, who is directly pushing everyone’s buttons. I can appreciate what she’s doing here, or rather, how she’s being used to drive things forcibly forward. The way she does it, however, messing and teasing and even hurting Yukino, Yui and Hikigaya is pretty tough to watch though.

Even more confusing, is how she ended up hearing about Hikigaya’s little speech. I must’ve missed something, but there was clearly some way in which she found out about it. Wasn’t that a speech that only Hikigaya, Iroha, Yui and Yukino know about?

In the end, its all pretty confounding. Its unclear exactly what this episode is leading into, or how. I’m sure the attempt is to make it hard to really guess who Hikigaya is going to end up with (if anyone?), but right now it really feels like Yukino is being favored.

For some reason, Yui seems to be actively recoiling away from her earlier attempts at being close to old Hachiman. Is it guilt for Yukino? Does she feel inferior to her? Or is there something else at play?

A ton of burning questions are all that are popping up at the moment. There are things, like Iroha’s flirty teasing and Kaori’s proclamation that she’d give Hikigaya chocolates this year, but they’ve all kind of fallen to the wayside at the moment.

While I will say that this episode is confusing, somewhat uncomfortable, it does serve its purpose to hype for the season finale. I expect everything from this episode to make a lot more sense after whatever happens in the next episode happens.

On its own, this episode is a bit of an odd beast though. I don’t there’s much more to say beyond the fact that its going to be a painful few days before the last episode.

The fact that this series has only 13 episodes has been something that’s been with us since the begining, and now, with only the final episode to watch, it’ll be time to see if all this intense buildup and plot movement is actually going to lead somewhere.

And if it does, will it actually feel good and satisfying? I suppose we’ll know this Friday, won’t we? 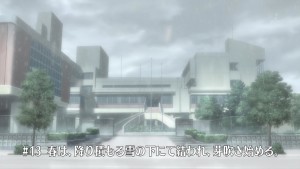 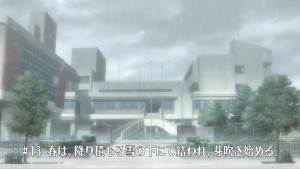 Seems like this last episode is actually going to be Yui centric. Surprising, but I’ll take it.