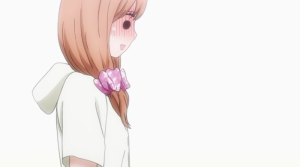 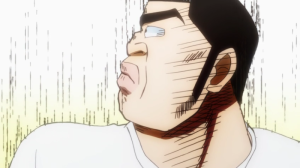 It’s a week full of equal-opportunity fanservice, as the gang heads to the beach and both Takeo and Yamato get to ogle one another SO HARD they’re lusty teenage hearts nearly explode from the experience. Fun (and funny) times are had by all, Takeo’s more popular than he’s ever been (even with some of the ladies!), and our young couple very nearly share their first kiss under another trademark Madhouse sunset. Yet for all the silly rom-com shenanigans, this week is once again filled with crossed signals and miscommunication, and the series itself at last acknowledges (via our beautiful, ever-observant Suna-min Roll) that trouble may be brewing in paradise.

We’ll spend most of this post talking characters, but what really jumped out at me this week was the crazy level of stylization that went into the art and direction. OreMono has always been one of the best-looking series of the Spring season—full of gif- and avatar-worthy facial expressions, bouncy text bubbles and effects, well-utilized (if somewhat sparse) dynamic animation, a keen eye for detail, and (of course) more shoujo sparkles, bubbles, and doilies than you can shake a Moon Stick at—but this is the first week I’ve ever thought the show had its own specific style, My Love Story-esque rather than Chihayafuru 2.0. 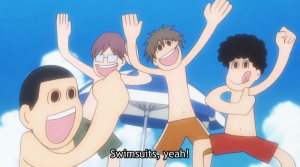 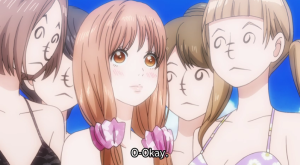 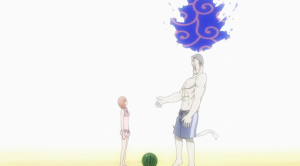 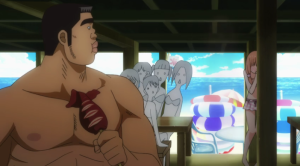 If my kanji skills serve me, we have Episode Director Shimazaki Nanako to thank for that, an experienced hand who’s worked on projects as varied as Fushigi Yugi, Trigun, and Monster in the past (as well as episodes 2 and 8 of OreMono itself). She brought this episode to life with a mix of classic shoujo prettiness, stretchy over-simplified sakuga reminiscent of old-school Gainax (or, more recently, Matsumoto Rie), Masaaki-esque thick lines and warped angles, and just a splash of American cartoonishness. The result was distinct and vibrant, and while an argument could be made for it being stylistically jarring and out-of-place compared to the last 10 episodes, I loved it, and wouldn’t be at all upset if we saw more of it in the future.

It also served to very literally illustrate the unspoken thoughts and emotional states of our protagonist(s), showing that things are becoming more warped and off-kilter between the two of them. OreMono does a surprisingly seamless job of jumping back and forth between Takeo and Yamato’s perspective and inner monologues, not only giving us their separate male/female gazes, but also showing how (as Suna notes) they aren’t “on the same page” in terms of where they’re trying to take this relationship. 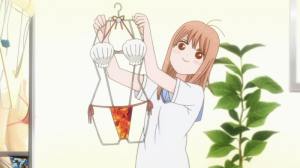 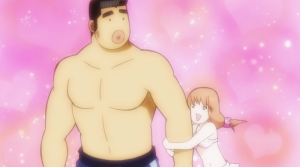 Yamato knows what she wants but is too afraid to come out and ask for it, partly due to general first-love nerves but also because of some fairly low self-esteem. She’s a nice kid, and like so many nice kids this means she’s unnecessarily hard on herself, to the point where even one moment of selfishness sends her running off and beating herself up for being “so self-centered” (and never mind that she’s the one who noticed the kids earlier that day and had Takeo play with them).

She also doesn’t have any confidence in herself as a romantic partner, as she keeps glancing away nervously from Takeo’s long stares and doesn’t realize she’s giving him that dokidoki (what the subs nicely translate as “heart skipping a beat”) feeling she wants. Yamato badly wants to take their relationship to the next level (or at least the next step on the staircase to the next level), but, as noted previously, she’s been taught to believe this makes her “impure” or “selfish,” and so she can never manage to communicate these desires to Takeo (who’d likely be more than willing to snuggle if she’d just ask him to do it). 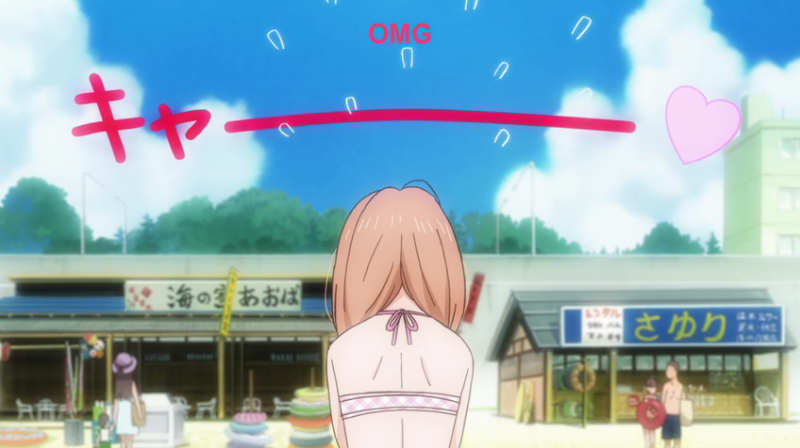 These adorable squees brought to you by Gon friggin’ Freecs.

Unlike Yamato, who knows what she wants but not how to get it, Takeo doesn’t seem to quite know what he wants. He’s more content about the relationship than Yamato, seemingly happy to go on in this fairly innocent manner, but it’s starting to feel like this is more out of intense repression than actual desire (or lack thereof, I s’pose).

It’s understandable, given that he’s never had luck with romance before and has spent most of his life unintentionally intimidating people. He’s so used to scaring others that he’s still half-convinced he’ll do the same to Yamato, which makes him hesitant to act first—although the sunset does get the better of him and he finally vocalizes that “I love you” we’ve been hearing in his head for weeks, and very nearly manages that first kiss as well (stupid friends, ruining our romantic moment!) 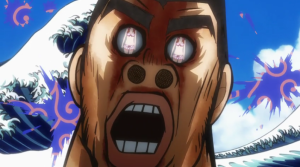 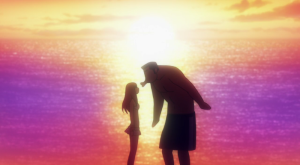 Plus, on top of his personal experiences, he’s dealing with his own societal pressures, and with only a vague understanding of them, to boot. Yes, unwanted ogling is creepy, but there’s no harm in appreciating physical beauty, especially from your romantic partner who clearly wants you to do so. But Takeo is so convinced that anyone who enjoys the sight of another person in a swimsuit is “a perv” that his brain nearly breaks when he sees Yamato in hers. The animation here is perfection, by the way, using the image of Yamato reflected in Takeo’s eyes and finally that burst of color exploding from the top of his head as he fights to keep himself from feeling turned on while simultaneously being turned on as hell. Only Suna Logic can keep him functional for the rest of the episode.

More and more, I’m starting to feel like My Love Story is slowly crafting a critique of the sex-shaming that goes on in so much YA anime/manga, which runs the gamut from ignoring sex entirely (the “purity” Yamato fears she doesn’t have) to making it an aggressively uncomfortable part of every interaction (the “perversion” Takeo’s trying to avoid). These two really aren’t on the same page, but it seems to me they’re on different pages for essentially the same reason. Now that Suna’s stated what many of us have been noticing for a few weeks, it’s bound to come to a head before too much longer. Those sand walls can only protect their etching for so long, after all. With luck, our young couple will find a way to work through these misunderstandings and scratch their feelings into something a little more durable than a beach.