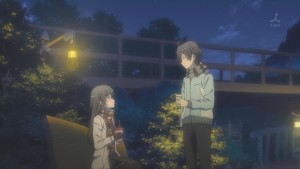 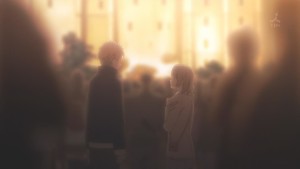 And so… we’re back. Back to the beginning, the core of the show, the big love triangle. Its easy to believe that past events have more or less been swept under the drug, but make no mistake, things are definitely not how they used to be.

In a surprise move yet again (Yahari just seems to have a near infinite supply of them) things went in a completely different direction than what I was expecting would happen.

If OreMonogatari is this season’s feel good show, full of honest, pure and genuinely good characters that can do wrong, then Yahari ore no seishun is filled with a cast of flawed characters that are trying to become better. In some ways, Yahari’s characters and by extension its story is a lot more grounded in reality, and because of that it has some really interesting things to say.

Its all there really, starting with how the episode opens. It makes complete sense that, given what Hikigaya did last episode, with his bold, emotion filled declaration, that he’d be a little embarrassed… like any normal person. But Hikigaya isn’t quite a normal person, he’s the cold, detached dude that only recently realized that there are things he cares for and wants to fight for. So seeming him writhing in his own embarrassment at the start of the episode is pretty fitting (and a bit entertaining).

But despite whatever embarrassment he does feel, its evident from the very first scene, that this is a changed guy. He’s more positive, he’s got a sense of calm and control to him. Things are, simply put, looking up for him again, and he’s out of the woods… at least for now.

Last episode, I mentioned that Hikigaya laid out his wants pretty clearly, even if both Yui and Yukino were thrown for a loop. This week, we pretty much get insight into Yukino’s desires and wants, and its just as interesting as Hikigaya’s whole conundrum.

I have to admit, I’ve been a bit disappointed by what we’ve seen from Yukino this season so much so that I almost ruled her out of the running, as far as our primary love triangle went. But lo and behold, the show pretty much brings her out of that, but does so carefully and thoughtfully.

With the issues of the Service Club at least kind of resolved, Hikigaya, Yui and Yukino turn to the next major problem; Iroha’s whole Christmas event. With Yui and Yukino in tow, I expected things to start heading towards the better, but surprisingly that didn’t happen.

The only thing that did happen was more confirmation from Yukino and Yui that the other student council president is a complete idiot. I think the show’s more than hammered it home at this point… But instead of Yukino taking a stand or taking over things like I expected, things went somewhere else entirely.

The foursome of Hikigaya, Yui, Yukino and Iroha end up going to Shizuka for advice instead, which leads to them getting tickets for an amusement park for “research”. Rather than research, I think Shizuka definitely means it as more of a chance for the kids to mend the wounds that their relationship has sustained thus far (the winks and congrats she gives Hikigaya are evidence of that).

Yukino, being the closet cute addict that she is, has a season pass (heh…) for the amusement park, which leads to Iroha inviting her crush Hayama. Ebina, Yumiko and Tobe make an appearance as well to keep things “fair”.

And while this episode could simply have been just what Shizuka set it out to be, a change of pace, it doesn’t just stop there. After enjoying themselves a bit at DestinyLand, Yukino and Hikigaya end up getting separated from the pack, and get some alone time.

Its here that Yukino makes her return to the love triangle. We find out that what really threw Yukino off, what depressed her, was the fact that she and Hikigaya were not really as similar she believed.

Yukino has her issues and problems and in Hikigaya she saw a kindred spirit. As time went on, however, she not only fell for Hikigaya but realized that he was pretty different from her, and wanted different things than she did. Its in those realizations that Yukino got truly depressed and its in this revelation that Yukino’s past actions begin to make a lot of sense.

Yukino’s whole thing about “thinking she understood things” and what not, and her whole thing with “Yui” playing dirty, it was all tied to the fact that she realized the rather big chasm between her and Hikigaya. Its an interesting discovery, thinking that she could understand someone because they were similar and then losing that entirely. The depressive rutt, its understandable if unfortunate.

Thankfully, Yukino’s past that in the same way Hikgaya’s gotten a bit more positive. Now the real question is whether it makes sense for Hikigaya and Yukino to grow closer and become a couple.

Personally, I’m of the mind that it doesn’t and simply because of said chasm. I think what’s interesting is that Yukino always assumed that she and Hikigaya were similar, and when that turned out to be false, she recoiled.

Yui on the otherhand, has been long trying to close that gap between herself and old Hiki, and I’d argue that she’s been decently successful. But I think I’ve made the case for Yui enough times that I’m retreading old ground at this point.

What is worth noting is that I believe Yukino understands that too. That’s why she mentions the whole: “I wanted something that neither you or my sister had so It could help.”

Now as to WHAT it could help? I’m betting she was hoping that extra element would’ve helped her close the gap between her and Yui, basically make up for the defect that she feels she has when compared to Yui. Its a very Yukino way at looking at romance, logical and calculating when love is anything but.

Time will tell what happens with the main love triangle, but something else happened in the episode that was equally interesting.

This was also the episode (or rather the end of the episode) where Iroha ended up confessing to Hayato and being turned down, amidst some pretty sweet mood making fireworks.

You’ve got to feel for Iroha, but I think her romance was pretty much dead from the start. It’s clear that if Hayato has feelings for anyone, its Yukino.

I guess that makes this some weird Love Polygon at this point? Pretty messy stuff. About what you’d expect from high school teenage students I suppose.

With four episodes to go, I’m really curious as to where Yahari decides to stop for this season, and whether we get some kind of resolution or just another painful season ending with an unresolved story. 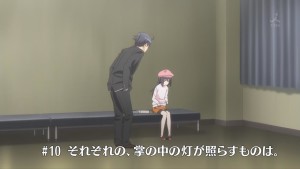 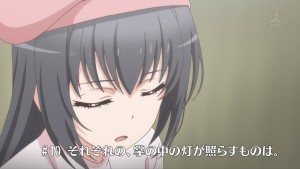 Seems like we’re back to the student council issue at hand and Rumi. Interesting stuff next week!