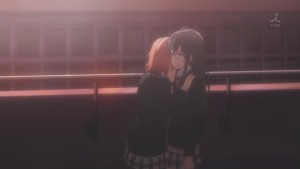 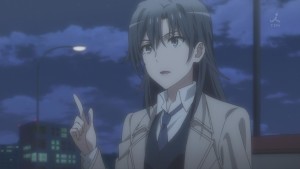 What really makes this second season of Yahari Ore no Seishun so impressive is how it continues to play with your expectations. To call it unpredictable is putting it lightly, because despite just being powerful its quite possible so full of shake ups and twists that there’s no moment of respite, of rest. Something is always happening, pushing things forward, and that feeling of progress and momentum is the defining trait that makes this show such a joy to watch unfold.

The eighth episode of the season is really just two big moments, but they’re so darn impactful that this may be the true “turning point” of the story. And these two big moments or scenes, are the sort of stuff that viewers of film or TV are quite familiar, its just simple two or three characters exchanging words. Its in that simple exchange, that the series walks the tight line between exposition and subtle prodding at its core concepts.

After the major shock that Hikigaya received last week at the hands of Yukino, its quite fitting to see it followed up by an introspective talk with Hikigaya’s teacher Shizuka. Shizuka’s an interesting character in that she’s always kind of being lurking in the background, driving events but never really stepping into the thick of things.

She’s obviously the reason that Hikigaya and Yukino meet, and why the service club came together. She’s also the reason that all three of her students are being given this rather odd environment to work through their issues. And generally speaking, she lets Hikigaya, Yukino and Yui figure things out for themselves, or has been up till this point. But… It was definitely time to step in and help things out a bit, and I’m glad she did.

The talk she has with Hikigaya is cryptic at best, because its clearly evident that while she wants Hikigaya to succeed and change himself, she can’t really just spell out the answers for him. The conversation itself is quite a bit of deep stuff to absorb but the essence of it is pretty much to give Hikigaya some clues as to how to work himself out of his situation.

And its really evident just how much help he needs when Shizuka asks about how things are going and he mentions the whole Iroha situation rather than what’s really eating at him; Yukino and Yui.

If there’s a central theme to this current arc, and maybe even the story at large, its simply being able to understand other people. To come to an understanding, to connect, to be on the same wavelength e.t.c, its something that all three of the kids in the service club are having issues with, even they are pretty smart and have their own strengths.

I don’t know if its cheating if a character goes outright and explains to the audience in dialogue what the core issue is, but Shizuka does it and it kinda works. Its not perfect, especially given how well this season in particular has been about subtlety and “showing” rather than telling, but then again this is based off a light “novel”. Dialogue is kind of the bread and butter of that medium, and while it does feel a bit “expository” it does entertain.

Hikigaya’s issue right now is that while he can understand to a certain degree what people want and what they’re thinking from a logical prespective, he doesn’t really get the emotional side of it (As Shizuka pretty much lays out). Humans are rarely creatures of logic though, and so its no surprise that Hikigaya seems confused and lost. He’s always dealt with people in a very detached way, not accounting for how people “feel”, and that’s what he needs to change.

And make no mistake, the point where he’s at is pretty much rockbottom at this point. If there was an edge on the proverbial cliff, then Hikigaya’s pretty much there, about to fall off before he runs into Shizuka.

And to Shizuka’s credit, she may not be a perfect teacher or even a perfect adult, but she’s a teacher that goes above and beyond for her favorite students. While she’s no Great Teacher Onizuka, I definitely felt the Onizuka vibes from her in this episode. I think Shizuka just needed a moment like this to really outline how complex and interesting of a character she is, rather than just a punchline in the “unmarried pretty teacher” trope.

If nothing else, this whole scene shows that Wataru Watari-sensei had a pretty big plan and purpose for her all along. It just took this long for Shizuka to become more than a common Light novel trope. Still, its just one of the ways in which Yahari just kind of takes establishes ideas and trends and takes them in interesting directions.

And speaking of interesting directions, I wasn’t quite expecting to see what came next. If the first part of the episode was for all intents and purposes the “end of the second act” of this arc’s story, then the second half dove right into act 3 and began the resolution.

Its an interesting sequence of events, seeing Hikigaya kind of reach the breaking point and then worm his way out of his issues, and finally come out of it. I have to admit, the significance of Hikigaya wanting a “reason to act” a few episodes ago was lost on me, until this moment. I’m not sure if its just something lost in translation, but it really made a lot more sense when Hikigaya flat out realized that “him needing an excuse” was kind of odd, and he needed to get to the bottom of why he ACTUALLY wanted to do things.

This is kind of that one instance of a “duh!” moment, but one that I can say quite a few teenagers run into, or just people in general. Understanding one’s self, and what one wants isn’t quite as easy as it sounds, and even coming to the realization of needing to understand one’s self is quite the achievement.

So yes, Hikigaya “getting it” after his talk with Shizuka made a lot of sense, and him willing to examine himself and cut to the heart of the issue was really the “turning” point of the story, if there is indeed one.

From that point forward, we begin to see change, and a ray of positivity along with it. The whole exchange between Hikigaya, Yui and Yukino is a huge bundle of different feelings. Its awkward, its relieving, its sharp and painful but its also really important.

Hikigaya takes the first step and goes to the two girls, and they react in ways that just really define their characters. Yui reacts in the generally positive way she’s been acting, she gets a little bit of a positive response and makes up the difference herself. Yukino, on the other hand, in her reserved and still kind of depressed way, recoils back.

And man, what Hikigaya does takes gutts. He prefaces the whole talk with asking for the help from the two girls and admitting his faults, but it goes quickly from there to a discussion where each of the three kids end up saying what’s truly been on their minds. Finally, they communicate with each other, openly and honestly, and the results don’t immediatly lead to success.  Given how reserved, low key and generally detached the guy is, he goes out and says what he wants, and almost loses heart twice.

Thankfully, Yui’s there to keep things going, and refuses to let things die. In every way, Yui is the heart of the Service club, the warm fuzzy friendly one. She can’t quite keep everyone together herself, but when Hikigaya finally gives her an opportunity to have things change, she takes it and runs with it.

At the heart of the whole issue is what everyone wants exactly.

What Hikigaya wants is to fully understand someone, to not be confused or “in the dark” (as he puts it) regarding them at all. And yes, he admits its unrealistic, absurd, but he still wants it. In essence, he wants to be understood and really connect on a deep level with someone.

Its something a lot of people want, and its something that very rarely happens. And as Yukino, Yui and Hikigaya pretty much end up concluding, talking is hardly enough. Talking is just the start, and it takes effort, strife and a bit of disappointment in the whole process towards connecting with and understanding someone.

As to what Yui and Yukino want? Well its hinted at, eluded to but not exactly spelled out quite yet. Its clear that both Yui and Yukino like Hikigaya, but I’m not sure if its as simple as that.

But, the core problem, at the heart of this whole mess does start to mend, thanks to Hikigaya and Yui’s efforts. The service club goes from being seemingly broken beyond repair, to kind of having its pieces picked up and mended together.

Things aren’t how they used to be, but they’re not bad either. If anything, after all this bad blood and pain, the three of them have generally at least started the journey to connecting with each other on a deeper level. And that’s honestly not something I expected to see in Yahari ore no seishun.

I confess, I liked the show for its main character’s cynical view of the world and society in general. It was deeply flawed, but made sense in it’s own twisted way. With this latest story arc though, that world view has not only been completely deconstructed, but Hikigaya has really grown as a character because of it.

That, is simply put, writing and storytelling at its best… But, what truly makes it such a joy to behold is that I never even dreamed that a show like Yahari would be doing things like this, and making it look so darn easy. 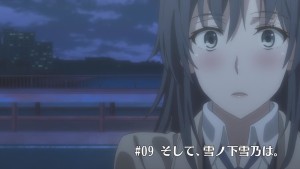 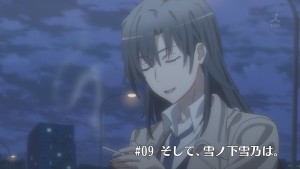 Next episode is titled “And so, Yukinoshita Yukino”, so it seems like the answers regarding some pretty pressing questions about Yukino should get some sort of development. See you all there.