Well, I certainly did not expect a jellyfish! I had guessed perhaps a tadpole or the like, but in retrospect when they showed Dagger approaching the members of Criticrista to turn them all into dark monsters (something that was confirmed as happening in this episode, by the way) the manner in which he walked/moved did remind me of something inhuman and awkwardly shuffling, not to mention all of those dark cloudy tentacle like things bursting out of his head. If the head is the main body and the arms, hands and legs are all extensions of the tentacles proper (hidden beneath the business suit, and shoes, etc.) then it would make some sense. I wonder if Dagger’s City State of origin is the same one Shizuku Secret Mind are from – that is, the city state called Venicillan? It would be interesting if one or some of that band’s members (Corriente, Wendy, Shabobon and Turtle, if you remember, as mentioned in episode 5) happened to know of him from long ago…. 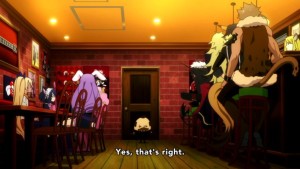 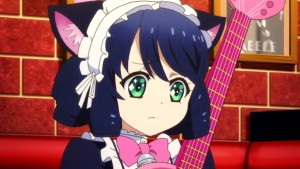 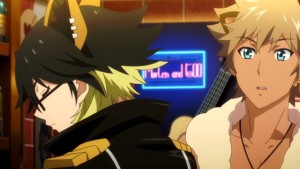 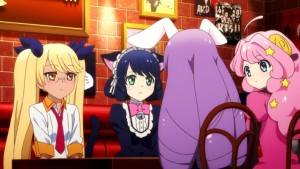 Coming back to the episode itself though, we are certainly hurtling towards the finale of the series. The Grateful Rock Festival is taking place at the BooDooKan, and all the popular bands have been invited. Early on in the episode we discover that Grateful King has indeed finished up writing the song Dagger requested, perhaps in the hopes that if he did so he would be released as promised before the Festival, and while Dagger is quite pleased with the results he also has no intentions of letting there be any interference with his current plans to use the Festival to further his power and control over Midi City (and beyond). Long and the short of it is that he leaves Grateful King locked up and … umm … “transforms” (or something) into flying giant jellyfish mode before heading off to the Festival proper. Looks like Angelica and President Maple, though, are heading off to the headquarters of Unicorn Virtual Music while Dagger is out and may attempt to free Grateful King? If the preview of the next episode is any indication they may succeed in this, and Grateful King may be able to arrive on the scene at the last minute and help defeat Dagger! 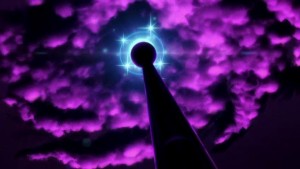 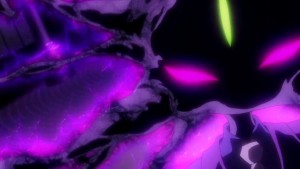 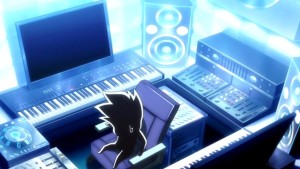 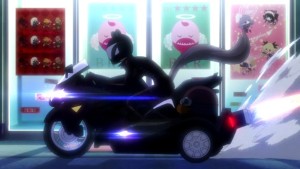 Unsurprisingly the members of Plasmagica also inform the members of Shingan CrimsonZ of Dagger’s plans to sabotage the Grateful King Festival with dark monsters,although I do not recall them mentioning that Dagger was specifically after Shu Zo from Trichronika (it would have been interesting to see Rom’s reacting to that), Darudayu from Tsurezurenaru, and Cyan herself specifically. So essentially we have three bands fully in the know, now, of Dagger’s plans and heading off to the Festival with the intent to engage Dagger’s dark monsters in combat: Plasmagica, Shingan CrimsonZ and Tsurezurenaru. We are shown some moments before the Festival itself begins, and we see many of the older bands making reappearances. Trichronika shows up, of course (and announces that at the moment Plasmagica is the most talked about band in Midi City after they defeated Criticrista), as does Shizuku Secret Mind, MariMari and Tsugihagi of Shinimonogurui (the band of youkai from episode 7) and interestingly we also catch ear of Ogasawara at work again … he apparently has made his way to the countryside to give tickets for the Grateful Rock Festival to the members of Uwasanopetals – the four man group from a high school who periodically are cameoed (in this episode they just finished playing at their school festival) and often shown lamenting that they cannot go to Midi City. In more ways than one it is definitely turning into a “battle of the bands”. 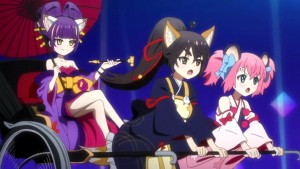 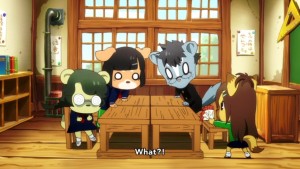 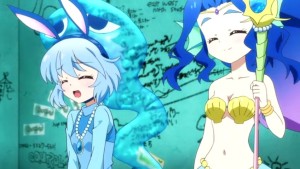 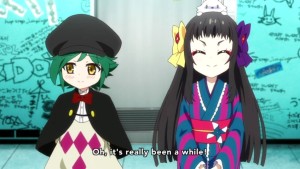 Trichronika is the opening act for the Grateful Rock Festival, followed by Shingan CrimsonZ. While these two bands are performing for everyone the members of Plasmagica are shown with Shizuku Secret Mind in their waiting room and mulling over the fact that they have not seen the members of Criticristsa. Finally when Tsurezurenaru (prolly my fave group of the ones from this series, by the way) begins performing Dagger finally strikes, and teleports the members of Trichronika, Shingan CrimsonZ, Tsurezurenaru and Plasmagica into the alternate dimension all at once while unleashing a dark monster on them in the shape of a giant moth. This one seems to be quite powerful, and after appearing and trapping all the other members of the groups except the three main ones we have heard Dagger had his eye on Darudayu decides to engage the dark monster moth alone … and … holy smokes, she does a first rate job. Essentially she transforms her Daruma doll into a giant mecha of sorts and gives the moth a beat down in hand to hand combat! But just before she is about to deliver the finishing blow to the dark monster Cyan screams and pleads for her to stop, as she has suddenly become aware that the dark monster’s host is none other than Rosia from Criticrista. Apparently when the dark monster is hurt the host also shares in it’s pain, and there even may be a faint possibility that the pain could result in death. If this is so then Tsugihagi from Shinimonogurui really lucked out in surviving! 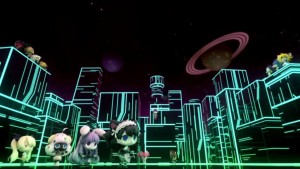 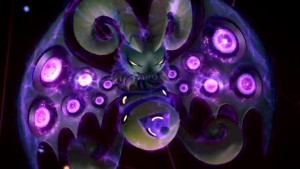 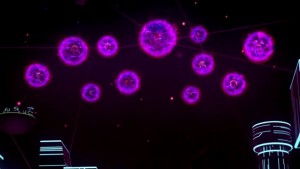 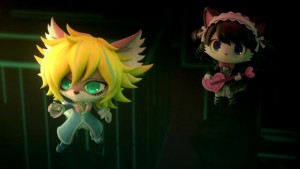 In the midst of all this I found myself thinking more and more about Dagger and his being the main … erm … disseminator of the dark monsters. From the example of Chuchu we see that dark energy can develop in a Myuumon without any interference from Dagger. We also see from Aion’s example that the dark energy (or a dark monster embryo attempting to take over someone) can be destroyed/expelled even without the influence of someone super powerful like Cyan or otherwise through “positive thoughts” (for lack of a better word). This makes me think that the potential for dark energy has always been present in Sound World and is just “part of the landscape”, so to speak. What makes Dagger different, it seems to me, is that at some point he succumbed to the dark energy and was taken over so thoroughly that he began a “campaign” of sorts to bring more of it throughout Sound World. But music … music may be a way for the original process that he gave in to to become possessed by the dark energy way back when to be reversed, and it may be Cyan who will be the catalyst to do this. The reason why music is the only thing that can stop Dagger is because music (from the heart, as Darudayu insists on again in this episode) is the only thing that could make him revert to what he was before – as per the example of how Plasmagica saved Chuchu. 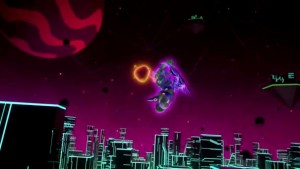 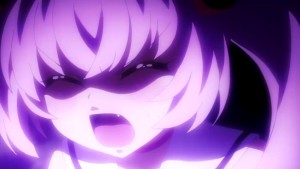 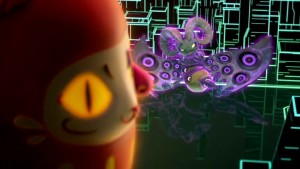 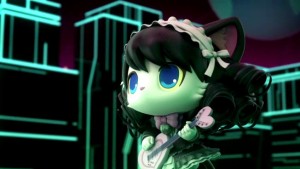 In the OP sequence we are shown that Cyan eventually sprouts wings like an angel is often depicted as having … I have been wondering for some time now whether that will be brought into the narrative of the episodes proper, and will be her “final form” in which she will finally be able to defeat Dagger. In many ways the situation of the negative energy, Dagger, Cyan, a “final form” and the rest is beginning to remind me curiously of the “mahou shoujo” standard (of which there are a few similarities in Show by Rock!!) in general, but also the dark energy is reminding me of the character of Noise from Suite PreCure. The Noise is a part of reality, in a way, and will always be with us. The problem is when people do not know how and/or are unable to properly “benefit” or “take advantage” of the negative or bad things that happen in this life, become fixated on them, and let them rule one’s being. Perhaps something similar has happened to Dagger? It seems pretty clear that Cyan is the one who will save him and thus Midi City and even Sound World as a whole. But exactly how this will take place will be unpacked in the final episode … which can’t come too soon as far as I am concerned!