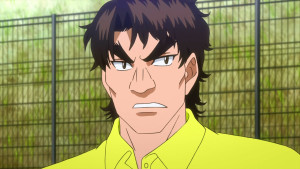 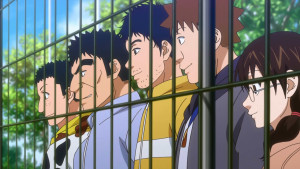 Another great episode and we just spent the whole time going all in on this match. It’s unlikely to go for more than another episode, but it’s been nice to just spend all this time on the match against Araya. This shows how far Maruo has come and the areas he will struggle against going forward. Araya is just faster and stronger, there is no getting around that. You can push your body to its limits for a couple years and that won’t beat out several years of extreme training. Plus people are just built differently. But Maruo does have great eyes and good tactics and that is enough with his current physical level to keep up with someone like Araya.

And yeah…I have to point out the biggest technical screw-up of the series so far in this one. I mean someone should be smacked in the back of the head on this one. How do you have Kageyama’s VA and Yukichi’s VA (around 4:10) saying the lines for the other character? Dang…that’s a pretty bad screw-up. It may just be me, but I had to rewatch that a couple times saying “what?” 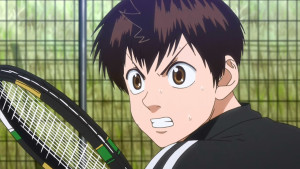 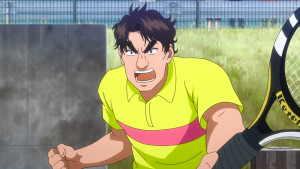 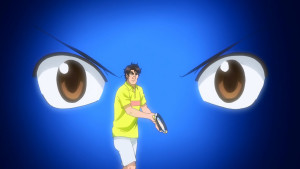 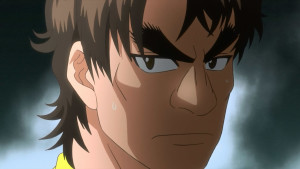 This match just had a lot of good tension. You could see Maruo fighting and struggling to find ways he could fight and attack. He was looking for weak points in Araya that he could exploit. He was taking time to try and understand how he could deal with Araya’s abilities. The left-handed shot was really hard on him, but through the game he was figuring it out. He just rationally figured out the standard tactic for dealing with left-handed serves. He figured out how his change of pace could be used to give him an edge and how he did have to be careful. Maruo just kept on working as he played and sometimes through pure accident he surprised Araya and got the advantage. It just shows his dedication and effort level.

Araya as well was just a great opponent and has been growing. He knows how good Maruo is and how much he has to try to overcome that. He knows how people will try to shut down his left-handed tactics, but he has his own skills. Araya is just fast and strong and that is a great advantage. He also is good at adapting. Playing as the #2 behind Takuma all this time has taught him to learn and change. He can and has been adapting to the change of pace. Maruo can’t just wildly change his tactics, he has to be tactical or Araya will have a full grasp of his speed and different shots. For a loud and angry guy, he does have good tactical understanding and adapts quickly. 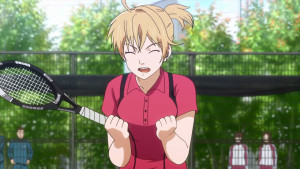 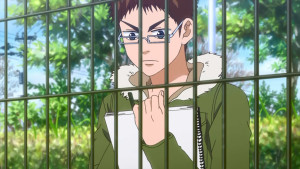 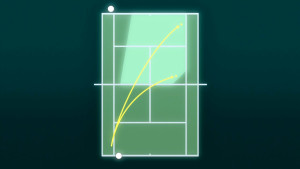 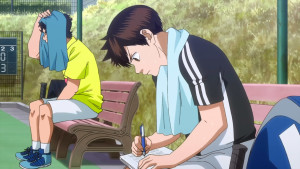 How this match turns out will be interesting. You have Araya who is getting better as the match goes on and is figuring things out. But you also have Maruo who is smart and slowly getting used to Araya’s abilities. It’s a tight match and worthy to be the championship match of the tournament. I find it interesting to see Araya at the end get so focused on just hating to lose. That may be different from playing not to lose, but curious how it helps or hurts him. At the end his past and the guys on his team matter, but not more than his own feelings and desires. He plays tennis because he likes to play tennis and he just hates to lose. Natsu does say that Maruo is having fun…while looking almost crazed, but maybe that is just him having fun XD.

It was nice to see a bit of Natsu. Her match wasn’t nearly so tough clearly, she just steamrolled her opponent. But still good that she secured her seed in the next tournament and will be fighting hard going forward. She of course has full faith that Ei-chan can win despite Araya being such a force. His coach is a bit more uneasy and he’s probably right to be. It’s a tough matchup. How Ei-chan’s tactics and adapting to Araya’s left-handed style compares to Aaraya adapting to Maruo’s play and his shots. Should be fun to see which of them can grind out the win. 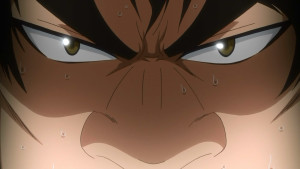 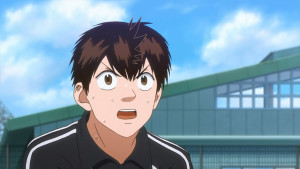 Again, there wasn’t much difference to note from the material. This match has been pretty well played straight up and I’m fine with that. There is only so much additional stuff you can add in the middle of the matches themselves. You don’t want to mess up the story that has already been laid down. Can’t wait to see the end of this match and just the last set in general. Both guys are giving their all and showing why they are so darn good.
Score: A