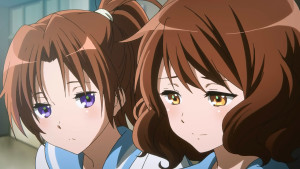 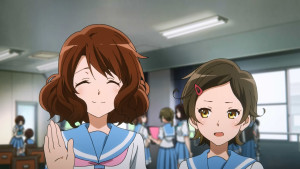 Well things blew up spectacularly as expected. Though perhaps the drama went a lot further than one would have thought. I expected the trumpet fangirl to be pissed at Kaori getting beaten by Reina. But, it was something else to see the whole band collapse into pathetic rumor mongering and questioning the results. It just reminds you that this is a group that was incredibly lazy to start the show and sided with the older classmates who didn’t really want to put in the effort. It’s hardly the most mature bunch of high-school students you’ll find anywhere.

That’s why I’m all for the secondary auditions. I agree with the idea. These people will only get it when they hear it themselves. They need to outright hear the difference in skillset between Reina and Kaori. I just hope they make the proper decision. A lot of hope is being put in the musical ears and the maturity of these people to vote the way they actually think and not because they don’t like Reina. I do kind of wish Kaori hadn’t raised her hand because she isn’t as good and should accept that. But, I do get that to resolve this mess she has to compete and also I understand that she literally needs to hear the difference in ability before she can fully accept it. 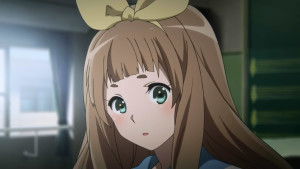 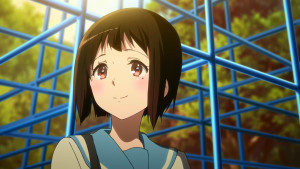 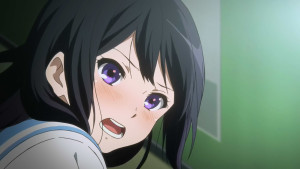 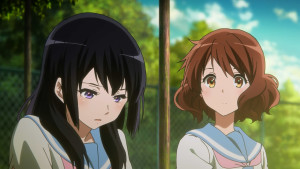 It just sucks for Reina that she has to go through all of this nonsense. She played the best and she got the part. That’s not her fault nor is it a crime to be better than someone. Sure, you could say it would have been nice if she was able to more smoothly handle the situation. But I don’t think she had to. It was the ribbon fangirl who started this mess. Her stupid obsession with Kaori that has made the band a disaster zone. She was being a jerk and Reina did have a right to defend herself against these insults. Now, if she could have kept her own feelings in check it would have been nice. But, it’s hard to expect that much when everyone is acting ridiculously around her.

I just liked seeing Reina vent to Kumiko and just freak out like that. It’s not often you see Reina lose her cool and she did so in amazing fashion. Arms moving, leg slapping, she was so pissed off and frustrated that she couldn’t simply express it in words. Kumiko didn’t have to do much other than be there and agree that she wasn’t wrong. Kumiko doesn’t think so and wasn’t about to lie about that. She knew that Reina was better and that the rumor mongering was stupid. 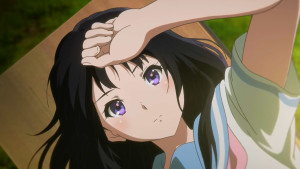 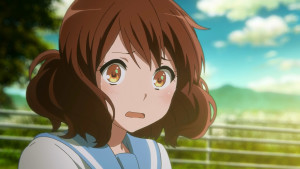 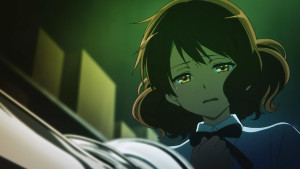 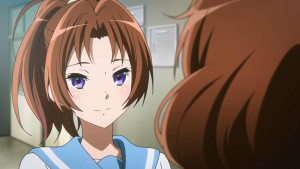 Certainly a big point as well was about Reina’s motivations for coming here. None of it was all that surprising, but it was good to confirm things. She did come here because Taki was teaching and turned down the invitations elsewhere for that purpose. And yeah she also has a crush on Taki, which isn’t all that big a shock. You figured she had feelings there. Though hard to say where that will lead. Taki is mature enough not to fall for a high-school girl and become a criminal. Though to be fair he finally lost his cool once when it came to them taking apart the blanket flooring. That was nice to see since too often the guy is a rock. I think it just adds some complexity to Reina as a character. I do think she’s pulled in a few directions in terms of her feelings. She’s a pretty volatile person emotionally.

I will say again that Natsuki remains an awesome character. We finally got the full Kumiko flashback and it was what I thought it might be. Kumiko beat out that girl and she got ripped into because of it. That other girl being an ass who couldn’t be bothered to recognize the facts. Kumiko was better than her and got the part because of it. There was just no defending that other girl. I can understand being upset you missed out, but if Kumiko had to not exist for you to get the part….you clearly weren’t that good. Plus she clearly doesn’t care about instruments in general if she can knock one over without a care. 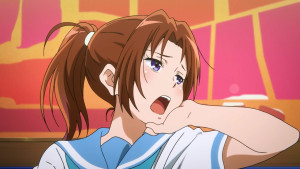 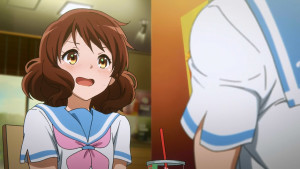 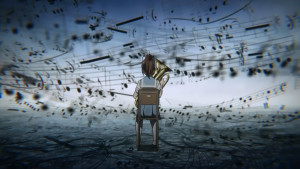 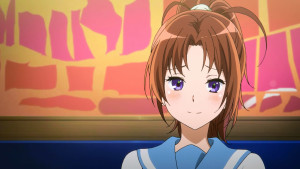 On the other hand Natsuki took the hit with maturity and some grace. I’m sure she wasn’t happy to miss out and was hurt, but she didn’t lose her head about it. She could accept the facts because the audition was fair. She did well on the parts she practiced like a zealot, but on other parts she slipped up badly. That was why Kumiko got the audition she did. She was shaken a bit by the parts that she didn’t practice as much, but she clearly did them well enough despite that. Natsuki could accept the difference in skill between them right now. Natsuki has played (perhaps not that much with how her first year must have been) for about a year, Kumiko has several years of experience. That’s not a gap you can close in a couple days.

What I did like was that Natsuki recognized that Kumiko would probably be uncomfortable and went out with her to talk it over. She has a good grasp of her own personality and character. She knew that she got pulled along with the changed mood in the band and if she had been more dedicated earlier she might have made it. Instead of being a jerk she’s going to use this as motivation and work her rear off so next year she can perform with Kumiko. I do think those are her real feelings on it. Thanks to Kumiko being there she’s had to work harder and is a lot better than she was. By next year she should be good enough to pass any audition and sit beside her. Probably doesn’t realize how much just that attitude helped Kumiko out. 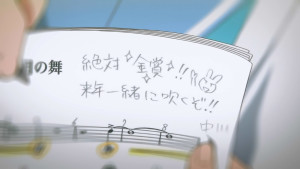 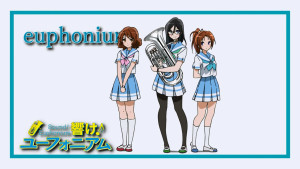 So now we move onto the secondary audition and prepare for the big event. I do hope Reina clears it easily since she does deserve that and she is good enough for it. Again the show gives us little bits of Asuka which makes her a hard person to dissect. I do think she was honest in saying she doesn’t care who plays the solo. Though I’m still curious on her feelings in general. If she does care about the music then wouldn’t she care that the best person is playing the part? Or does she really only care about her own performance? In the end we may not fully understand her by the end of the anime. This was a great episode for the drama and can’t wait to see things go nuts next week.
Score: A