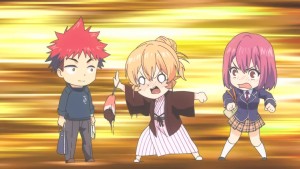 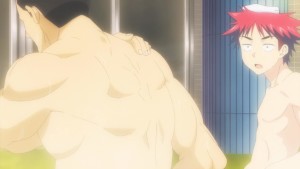 On the second day of the Summer Training Camp, things are really seriously heating up. While its been true that Shokugeki no Soma has been a consistently entertaining show as of late, its only in this episode that I truly began to feel something. My blood boiled, and then it cheered as the protagonist went on to do something about the whole unfair situation that presented itself. This is classic shounen stuff, the kind of stuff that hooks fans of the genre, and its good to see Shokugeki climbing among the ranks of the good kind of shounen series, and not so much the forgettable kind. 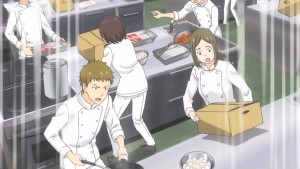 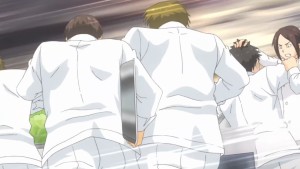 The truly fascinating thing about this show is the fact that its really in love with its setting, the absurdity of it and just how messed up the whole situation is. Its really a wonder how this whole Totsuki Academy thing is sustaining itself, because its a teaching style that seems to only reward the talented and breeds elitism on top of that. Its no wonder that someone like Soma is the main character of this show, the very anti-thesis of all of Totsuki Gakuen’s worst traits.

And speaking of Totsuki’s worst traits, we get their very personification in this week “alumni” teacher, Shinomiya. Shinomiya’s the very defintion of elitist, picky and all around jerk. The fact that he rigs the exam so that a certain number of students fail regardless is just the tip of the iceberg, and really… every line that comes out of that guy’s mouth is made to annoy and aggravate. 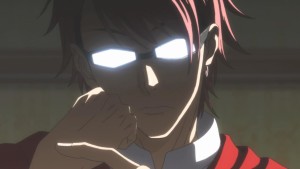 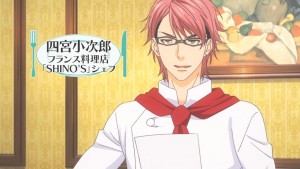 I may hate his guts, but he’s a pretty solid villain. He also fills a very much needed space that been sorely lacking in Shokugeki until now, a truly detestable opponent for Soma that you truly can hate. Its all pretty beautifully setup too, using Megumi Tadokoro as his unlucky victim.

Megumi is definitely improving, thanks mostly to the good company she’s been keeping (Soma). Its really quite heartbreaking to see her so ruthlessly and unfairly cut down by Shinomiya, especially after she tries so hard and makes the best of her unfortunate situation herself. 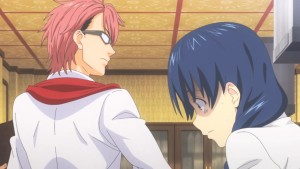 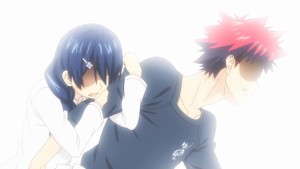 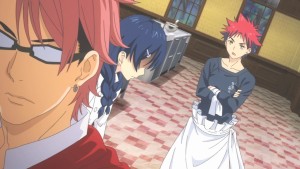 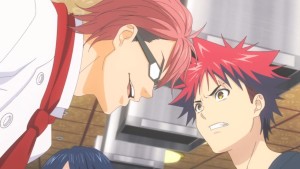 And the icing on the cake is definitely from Soma himself. He brings up the excellent point about the whole Training Camp itself. Its meant to simulate working professionally at a restaurant, and in a restaurant getting good ingredients is definitely the management’s job, not the chef’s.

Despite the very valid complaints, however, Shinomiya responds in his rather annoying elitist way and threatens to expel Soma as well, should he continue to question him. And its in that moment, that Soma does a very shounen main character like thing, and stands up to the injustice and to authority, rallying the audience right there behind me. 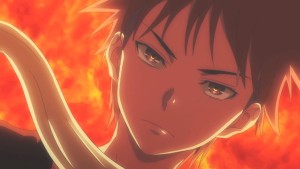 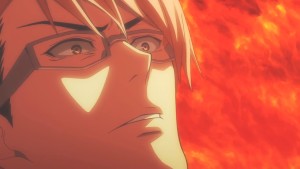 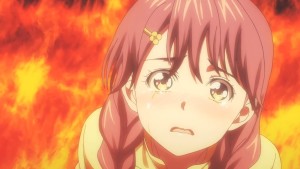 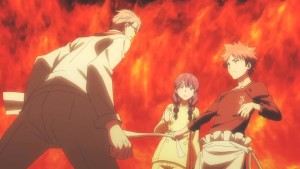 I seriously got chills when Soma challenged Shinomiya to a Shokugeki. Make no mistake, this whole setup and this upcoming Cooking battle is the show seriously raising the stakes, and making things exciting.

For one thing, there’s actually a danger to Soma this time. In the last few instances, Soma hasn’t exactly come out entirely on top, coming to a draw both with Seventh Seat Ishiki and with new found rival Takumi. So there’s an established fact that while Soma is GOOD, he’s not the end all be all of cooking (yet). 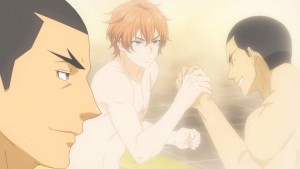 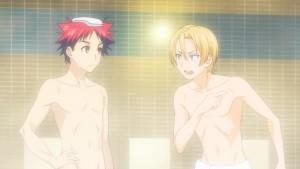 And with that all considered, Soma’s challenging a graduate of the Totsuki Academy, who could possibly be better than him. There’s a real credible threat, there’s some pretty serious stakes in that both Soma and Megumi could get expelled. More so than before, the stakes feel a lot more personal, unlike say when Soma took on Nikumi for the Don RS. Its taken about 10 episodes, but I’ve gone from simply interested to eagerly anticipating this upcoming battle, if only to see Soma wipe the floor with that arrogant ass Shinomiya.

Its worth noting that most of the good stuff happened in the second half the episode but the first half of the episode had some interesting bits as well. Last week’s episode ended with Soma running into Erina (Quite literally). 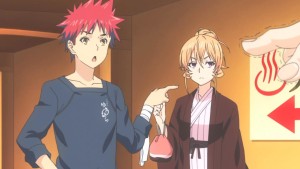 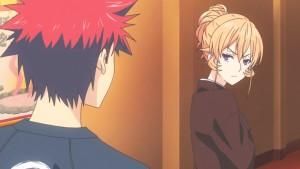 Their little exchange serves to highlight two things; 1. That they’re both kind of oddballs that are freekishly talented and were looking forward to the whole trip 2. That Erina is totally tsundere for Soma.

Now… I’m going to go ahead and throw my lot in with the Megumi camp. Its pretty obvious that the show is designed with a ship war in place, between the talented tsundere Erina and the nice, kind and gentle Megumi. Despite the fact that I do think there is some chemistry there with Erina, I just don’t like her as a person, even if she’s fine being the antagonist of the show. Having her as the love interest? I’m not sure that quite works. At the moment, the story has just made her too unlikable to be a serious consideration, at least in my eyes. 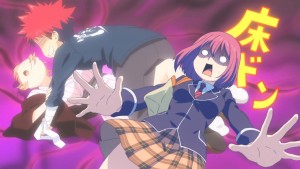 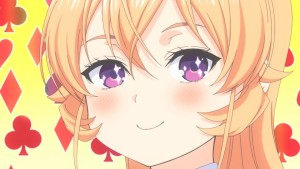 I’m assuming that will change, as the show is taking great pains to both develop her and keep showing her off, even when the core issue at hand has more or less nothing to do with her. That’s fine for now I suppose, and its not like it detracts from an already pretty solid episode.

All in all, Shokugeki no Soma is finally revving up into high gear. I’m thoroughly hooked, and though offline life issues have prevented me from blogging it weekly up till this point, I’m hoping to keep going from here on out. I’m not sure if I want to go back and review the other episodes, but if anyone’s actually interested in reading my thoughts, throw up a comment here, and I’ll get to it given there’s interest. 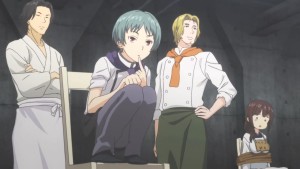 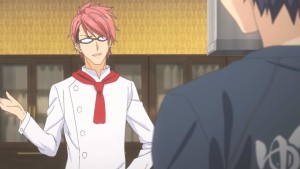 Soma vs Shinomiya, my mind and body are ready!