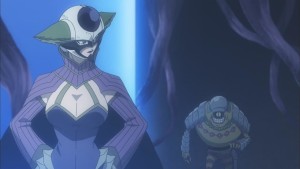 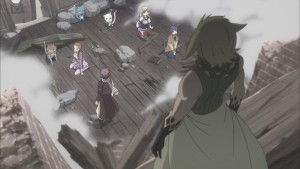 I feel like I’m watching a thrilling action movie, one that keeps on dishing out the action, the excitement and the cool moments. The only difference is that the dose is weekly, and each segment (or episode) feels pretty substantial. Its rare to see entertainment be able to both satisfy and then make you want more but Fairy Tail seems to be making it look easy.

Oh what a far cry this episode was! Not only from the previous filler episodes, but shounen anime in general. I’m just not used to getting what I want in an episode,especially if its continuing an exciting battle from the preceding episode. That is the big achievement of the Tartaros arc, the fact that it can be so gripping, exciting and not frustrate you at any point. Every moment in an episode just feels… Good. 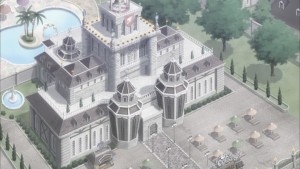 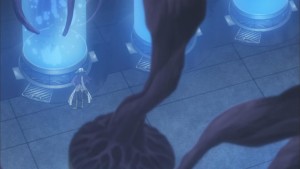 That’s especially rare for someone like me to encounter, since I not only watch a lot of entertainment, but critically analyze it too. The exceedingly fascinating thing for me is how lost I got in this episode. I wasn’t thinking about how well done something was, or how odd something was, I was simply hooked. The simple act of getting lost in a show is something that doesn’t come as often to me as I would hope. A situation where I become an engaged viewer that’s just waiting to see what happens next is the best compliment I could ever give a show. And Fairy Tail did that this week once again.

I really believe that the reason Fairy Tail’s Tartaros arc is so engaging right now is because its not breaking the flow or momentum of the story. That’s just something you don’t see, even in some of the best shows in shounen genre (I’m looking at you and your “sudden” digressions Hunter x Hunter!). The fact that we pick up immediately from where we left off, the battle between Tempesta and Laxus was just so genre opposing, that the episode had already sold me over at that point (i.e the very start). 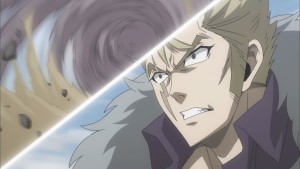 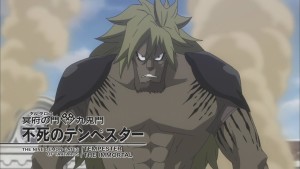 What happened next though? Well lets just say that things remained unpredictable. The battle between Laxus and Tempesta had a very unexpected conclusion, and it was a conclusion that serviced both the story and its characters.

We know for a fact that Laxus is one of Fairy Tail’s big powerhouses. He’s been unbeatable so far, and always someone that his comrades can count on. That didn’t change with this battle. No, rather than make the villain more menacing by nerfing or putting down a popular character, the story simply had Laxus succeed at first and THEN have to sacrifice himself. And boy, was it all a joy to watch unfold. 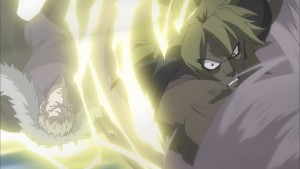 Whatever issues we’ve had with production values, they seem to be pretty much gone. While there is the occasional frame that isn’t exactly perfect, in general we’re seeing some solid animation and the battles are given their due. Laxus taking down Tempesta was a sight to behold. And man, even though I’ve seen it a few times before, I was totally blown away by just how powerful and mighty Laxus really is. I mean, that final attack: 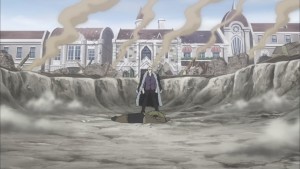 Wow. Just… Wow. There was no question that Laxus was clearly the superior one in that showdown. Of course, in classic villain fashion, Tempesta had an ace up his sleeve, and self destructed, releasing a miasma like disease into the air. I think the suspicion of mine that Mashima-sensei is using real world terrors as the basis for the Tartaros villains isn’t a suspicion anymore. With this bio-terror attack that Tempesta released, its pretty blatant. And I think its Tempesta’s final words before he turns into the Magic Toxin that are the most powerful: “You can’t stop a disaster”.

That’s quite the twist to throw on Laxus. He won the battle, but he was still pretty much going to lose. Yet, with what Laxus did next, we really got the next phase in his whole redemption arc. Laxus has stepped in to help others, his comrades, those weaker than him. After having overwhelming power, he’s learned humility and to care for others. So the next logical step is indeed for him to sacrifice himself selflessly for others. 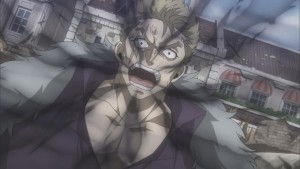 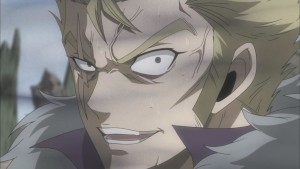 In a move that seemed like something Natsu would do, Laxus ended up absorbing all the “Magic Barrier Particles” in the air around him. With this heroic act, Laxus is indefinitely benched for the big battle against Tartaros. That’s quite the way to turn the odds against Fairy Tail. Short of Guildarts, Laxus is the strongest warrior that Fairy Tail has, and he’s essentially off the table.

Hell, he’s barely hanging on at the moment. But the big kicker? Laxus’s little act of selflessness didn’t exactly save the city either. That’s the true tragedy here, and one that makes the battle feel like a real loss for Fairy Tail. Despite Laxus’s best efforts, he really couldn’t avert the disaster, and over a 100 people end up dying in the surrounding area as a result. 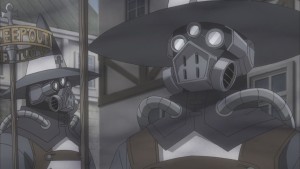 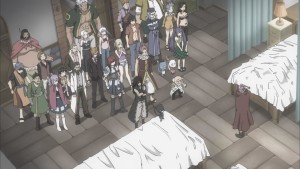 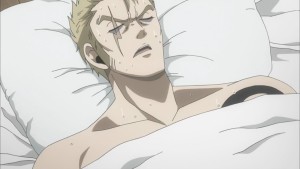 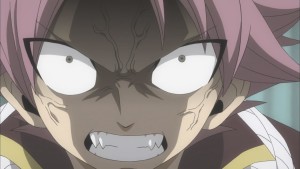 And Beyond just making this a really bitter moment, Laxus’s fall means that Fairy Tail’s whole issue with Tartaros just became personal. Three of their own just got taken out, and that means Fairy Tail is now out for revenge.

I really liked Makarov’s speech, because it outlined the human nature of Fairy Tail as a guild. This isn’t about saving the world, or preserving order. Sure, those things are important, and they might happen as an added bonus but the major goal here is most certainly revenge. Three of their family members were attacked, and now the entire guild is ready for war. This is a side of Fairy Tail that I’ve sorely missed, the gang/mafia like mentality that we only really saw when Gajeel was the villain waaay back in the Phantom Lord arc.

This personal nature to the story makes the whole conflict even more exciting. Natsu’s rage in particular, was pretty understandable given how much he values his comrades, and how he looks up to Laxus like an older brother. And its not just him, that scene of the entire guild, regardless of power levels, assembling and ready for battle was in one word: “Epic”.

I don’t think we’ve ever seen the entire guild united with a purpose. In every preceding arc, we’ve had select members from the much larger pool of Mages go out on a mission or two. Yet, this time, we’ve got the entire guild pretty much ready to tussle with Tartaros. That, in itself raises the bar and the epic factor of the conflict. 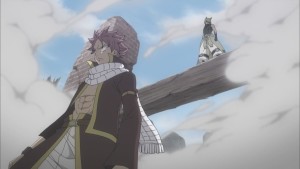 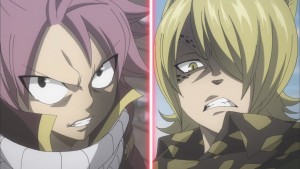 And in what I’m now getting dangerously used to, the fun of the episode didn’t end there. The episode ended on a pretty exciting cliffhanger, namely Natsu about to take on none other than Jackal. What a spectacular way to end the episode! For its second major move, The Tartaros arc is going to have its main character take the stage.

In all honesty, this battle seems to be in Natsu’s favor, given that Jackal uses explosions and Natsu can pretty much just “eat” them. As we’ve seen with Tempesta, however, I’m sure there’s going to be some twist that makes things interesting. Beyond that, there’s also the whole thing with “face” that the former council member mentions, which keeps things interesting beyond just the immediate battle. There’s a very immediate mystery to why Tartaros is attacking all known council members at this point, and one that I’m sure we’ll see an answer to soon. 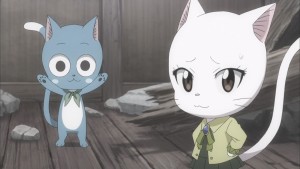 So… The story is firing on all cylinders, the pacing is superb, the cliffhangers are powerful, the animation and art is solid and then there’s also the music. I feel like the music for the show has also been taken up a notch. For one thing I notice it a lot more, and it just augments every scene so well. Fairy Tail’s always had a pretty unique and beautiful soundtrack, but its especially evident in these recent episodes. I mean, just the episode title music itself just totally pumps you up, and then the episode just brings it all home.

In closing, I’d just like to throw an apology out there. I’ve been pretty late with these posts, and my replies to comments have been pretty late too. That’s all going to change with this post, since a little offline stuff just got the better of me these past few weeks. With Fairy Tail being an absolute joy to watch, its just so easy to blog about it too, and with that, baring any personal troubles, I’ll be on point. 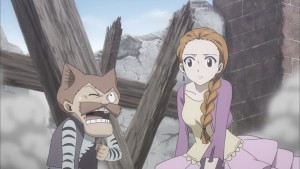 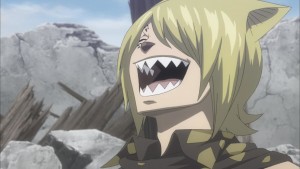 Next week/this week should be awesome. We’ll get another big fight, with Natsu at the center this time! See you all Friday Night!