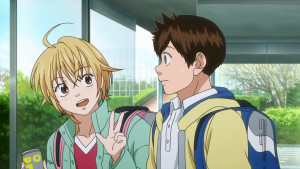 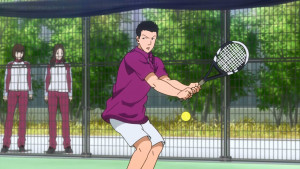 I never really thought that we’d see Maruo and Natsu actually go at it for a match. Of course it wasn’t that overly serious, but it was a good learning experience for both of them. It is a bit of a shame it wasn’t longer, but I suppose the actual physical ability differences made it tough to create much detail there. It shows the literal limit and difference between male and female tennis players. Despite the fact that Natsu has trained her butt off for years she still couldn’t take more than a single set there and it was only the first one. He won 6 straight after that point. This was an interesting way to play it between the Miyagawa match and the upcoming Araya match. This tournament is all about the rematch and people trying to change history XD.

It is a bit surprising that they would hurry on to the next match without having fun with the others, but it just shows that these guys aren’t the real threat to Maruo. The match against Miyagawa was important more to show the stress of someone fighting to become a pro and that win or die mentality. But almost no one in this tournament other than Araya is a real threat to Maruo at the level he’s at. Even the second seed wasn’t a threat to him. He really is a monster of a no-seed. Kind of a bad luck for some of the seeded players that they lose that advantage in having to play someone like him rather early. 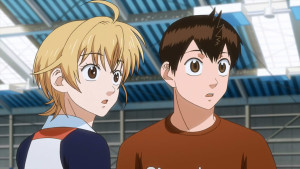 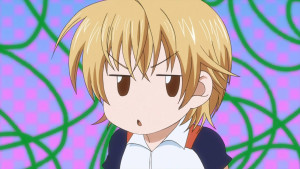 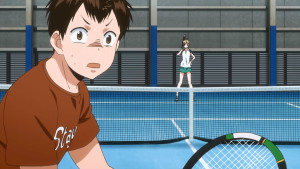 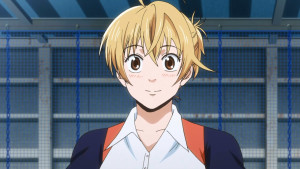 So yeah, Maruo and Natsu. I can’t blame Natsu for being pretty offended early on. She is a damn good player and has worked hard to reach that level. I’m sure she doesn’t want to be looked down on in general and certainly not by the guy she likes. I think Maruo’s reaction as just more shock as he’s been very focused on his own tennis and growth. While he’s gone to see Natsu play he’s had basically zero experience playing against girls or even watching a lot of their games. Plus…again it’s a girl he likes so he’s probably a bit uncomfortable with it in general. Hard to get into a competitive mood and plus if he actually is far better he doesn’t want to get her to hate him either XD.

In the end it was a fun little match. You couldn’t help cheering for Natsu when she got those first points. She was totally serious and has no issue going into a competitive state even against someone she likes. She’ll enjoy her matches. Plus she really was hard to handle at times in that match. Maruo was trying to go into analysis mode and it failed for many reasons. The fact it was Natsu made it distracting and her own play was unpredictable. Natsu made it hard on Maruo to figure her out and her was forced to try and play a control game while responding with more flexibility to what she was doing.

I’m sure the experience will be good for both of them. Maruo is learning how to deal with the unexpected and how that kind of play can be devastating against people who play a logical style like himself. It also helps Natsu quite a bit. She’s playing against someone with a high skill level like Maruo. She is dealing with the understanding that there are extremely skilled people out there and she has to be able to keep up with them. Maruo’s serve is pretty darn strong even for a guy in his age group as we’ve seen. So the fact that she could start returning those was good progress. Also just good to face the kind of meticulous style as her rival so she can try to figure out ways to combat that. The best thing of all was that by the end both of them were having fun. Aoi made some puns, but it really was kind of like flirting for these two. Just getting caught up in attacking and defending, and not thinking so deeply about it any longer. 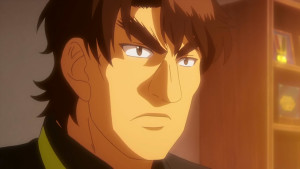 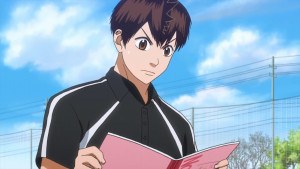 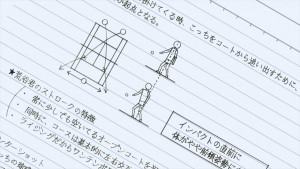 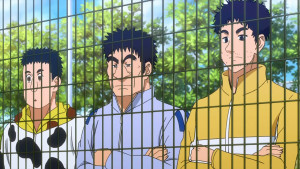 And yes the big match is being set up here. Maruo vs Araya. It’s just insane to think where Maruo was the last time they played and where he is now. He went from someone that just somehow managed to beat Miyagawa and absolutely had to rely on every weak point in Araya’s book in order to even stay in it, to someone who could topple Miyagawa simply by being better. This is it. He has to be able to beat someone like Araya. Obviously the proclaimed rival here is Nabae, but Araya is one of the top players in their age group. He couldn’t beat Takuma, but that doesn’t mean he’s not really strong. It’s going to take everything Maruo has to compete and is the real measuring stick of his growth so far. If he just can’t hold a candle to Araya then he may not have any hope here. Plus he has to try and win since getting as high a seed as possible going forward may determine his fate of even getting to the All-Japan Junior.

Araya isn’t taking this lightly either. This tournament means a lot to him. What I like with Baby Steps is that the competitors have clear growth and motivations. Araya has constantly lost to Takuma and constantly been #2. Sure, that means he should still be good enough to go pro, but it means he’s never really been the best. Despite the joking in an earlier episode, this is Araya’s chance to rise to the top. He has a lot of pressure himself to represent his club. He’s the best member there and if he can’t really compare to others it will look bad. Not to mention he feels the pressure of all those who couldn’t make it. While the Miyagawa match was fun…this should be an amazing match. 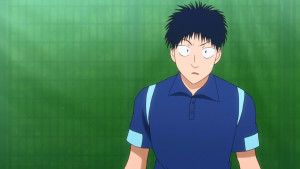 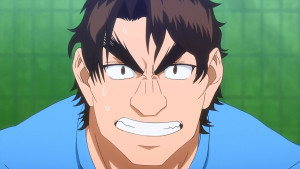 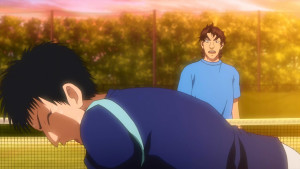 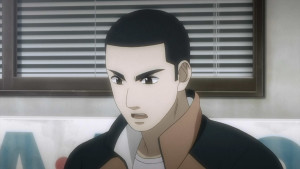 Not many changes to go over this week. They did expand things a little with Araya as you might expect. They showed him practicing like mad leading up to this match which wasn’t in the manga. But it fits as you know Araya isn’t taking this lightly. Maruo taught him a lot in their last match and he’s seen him just blast past guys in this tournament. He knows that Maruo is at least the second best guy there and he won’t take it lightly. He wants that top place and he will chase after it.

They also expanded the scenes in his flashback more. Showing the same scenes, but giving a lot more depth rather than a quick freeze frame of a guy struggling while playing or running. It really shows that Araya has paid a price to come this far. He’s sacrificed a lot including friendships and hanging out with people. He watched people he cared about drop out of that program. In general I think that program does try to do a lot of good things…but I don’t like it. It basically tries to obliterate people and knock out those who can’t go pro. Sure, it’s focused on pro, but Maruo’s club manages to support their pro candidates while still letting people have fun. Even if you are an A-court player, you can still see the other leveled guys and work as a group. Plus so far Araya seems like the only skilled person there. Is it even a really successful program if only one person comes out of it? 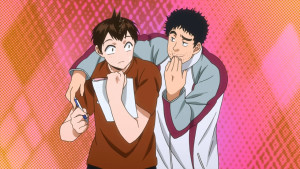 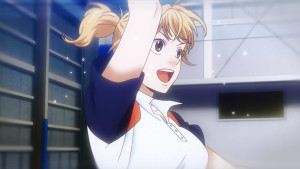 So this episode was building up to the next big match, but I still really enjoyed it. It’s the first time Maruo and Natsu have played tennis together. It had some ups and downs, some hostility, some bewilderment, and a lot of fun. So basically it covers their relationship to this point XD. You just want these two to take that next step already. Now both of them are heading to their championship matches. Can Maruo break history and topple Araya this time? We will have to wait and see.
Score: A-