When it comes down to it the main focus of this episode’s narrative was, of course, the interpersonal relationships between the members of Shingan CrimsonZ, but the occasion for bringing these into closer view was catalysted by the final event of last week’s episode – mainly, the reddish amoeba-blob thing that was associated with a “dark monster” (showing itself after being forced to detach itself from Tsugihagi when the resultant dark monster was defeated by Shingan CrimsonZ proper) crawling up Aion’s right boot and attempting to “take over”/possess him. Unsurprisingly this results in an internal clash between the band’s members and also unsurprisingly they are able to work through it and become closer as a group as a result.

Which is all well and good, of course. On the larger side of things, however, it seemed the portrayal of the process of how a person is approached and slowly taken over by the “dark monster embryo” was the most important part of the episode in terms of the overall story of the series, and I think assembling and doing a little analysis on the data we have up to now regarding the dark monsters may be helpful for the content of future episodes…. 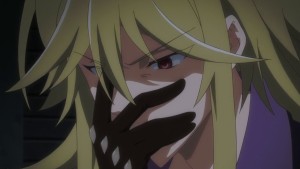 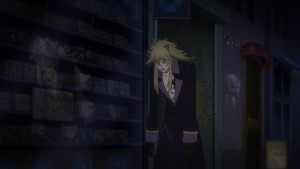 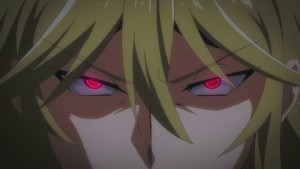 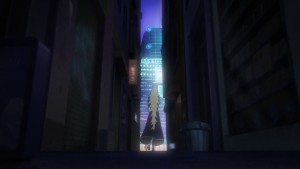 The embryo apparently “attaches itself”(?) to a myumon’s melodisian stone and proceeds to change it’s inner light to a dark red color, and it can be also “expelled” from the myumon proper. The main operative element in both strengthening and/or resisting the influence of the dark monster embryo (let’s just call it that for now for lack of a better word) seems to lie in one’s thoughts, disposition, attitudes, emotions, etc. The more negative and “destructive” they are the more power it has and the more positive or “constructive” the less … the end result of both is either the destruction (cleansing?) of the bad influence inside the myumon’s melodisian stone and the presumed destruction of the dark monster embryo, OR the embryo “bonding with its host” and effectively taking over it, allowing the transformation into the dark monster itself. But there is more! 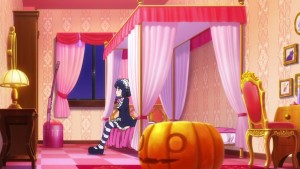 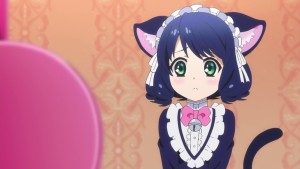 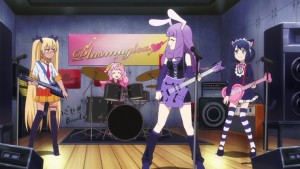 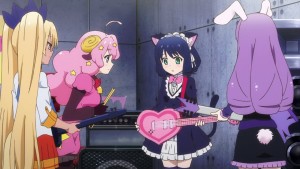 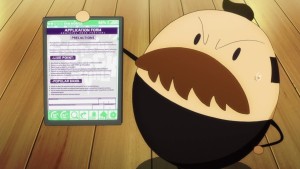 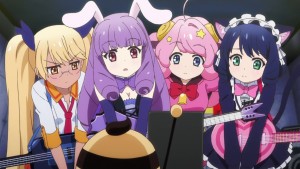 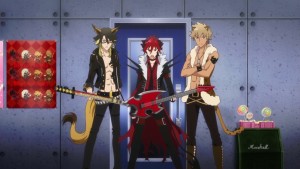 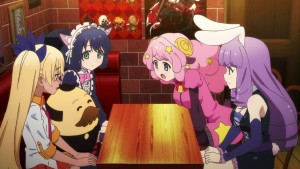 There are larger things at stake here as well – the one who is behind all this is the President of Unicorn Virtual Music Inc., and the aim we have heard in this matter is essentially for him to be the undisputed ruler and wealthiest man in Midi City by owning all the most popular music bands and using the dark monster … erm … “system”? … to destroy all competition. We have heard that Dagger has plans to spread his influence and power throughout the other city-states and all of Sound World as well, and it is against this ambition that Cyan and Strawberry Heart are opposed. By episode 8 one of Dagger’s most recently popular groups that is rising in fame is Criticrista, and they briefly swing into the spotlight once again when Plasmagica challenges them to another band battle (the first one took place in episode 3) to fulfill the entry requirements necessary for them to take part in an upcoming major music festival. Dagger uses the opportunity to humiliatingly remind Criticrista’s lead singer (named Rosia) that Cyan is the more talented of them, and perhaps also hinting again at Cyan being his “favorite” and the “chosen one”. Watching the interaction between Rosia and Dagger suddenly made me worried about something … I wonder how many musicians who have signed up with Dagger have already had a dark monster embryo placed in them? Dagger has to be getting his “raw material” from somewhere. 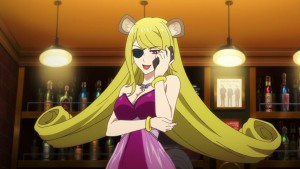 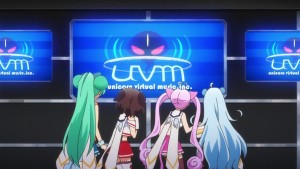 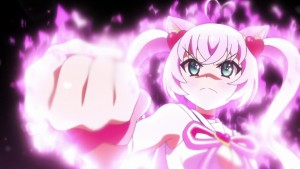 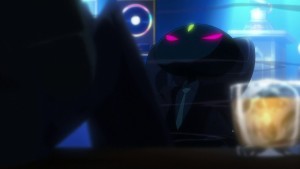 There were a few other things that popped up in this episode, an episode whose main focus was, after all, the members of Shingan CrimsonZ. We were reminded once again of the old connection between Rom and Shu Zo (the lead singer of Trichronika) – that in and of itself is neither here nor there for me, but on a larger level I wonder why they keep bringing it up and teasing us with it? Is it leading to some kind of important plot point? The twins of Trichronika also show concern that they don’t know anything about the relationship between Rom and Shu Zo. I wonder why? It turns out that it is Shu Zo who spots Aion on top of a building on a helicopter landing pad (and even discerns that he is “standing there and emitting a dark aura”) and he goes out of his way to tell this to Rom, whom he correctly guesses is actively looking for Aion.  Another interesting thing we find out is how it is Aion who is both the most talented musician amongst them all and the one who is most passionate for music, as well as the lyrics writer for the band, while at home he is a lonely, socially awkward shut-in, and can only interact with others by going into “pose mode” as a “dark god”. One definitely got the message that all the members of Shingan CrimsonZ were close to each other individually and tight-knit as a group. 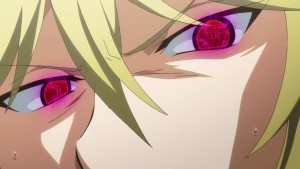 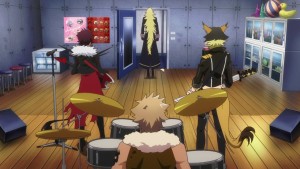 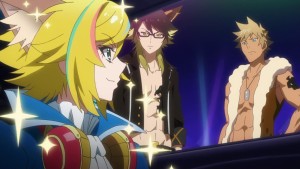 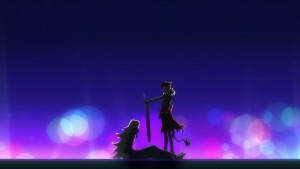 Part of me is expecting that next week’s episode may be the one when the proverbial hits the fan and the “final arc” gets set in motion. I would not be surprised if Plasmagica defeats Criticrista in the band battle (a huge upset in Midi City’s contemporary music scene), but part of me wonders if that will be a catalyst for Rosia to be taken over by a dark monster, whether she already has an embryo quietly laying in wait or if they all will be attacked by Dagger’s minions having “served their purpose” and now “only useful” as dark monster hosts. I hope such a thing does not happen. Rosia is ambitious and arrogant, but I would not wish being turned into a dark monster on anyone. Another fear, as mentioned last week, is with Chuchu – her ambition to be at the top also could be raw material to be taken over by an embryo, and if Cyan in particular blooms at the band battle like she did way back in episode 1 when she defeated the dark monster attacking Trichronika I could see it removing Chuchu from the “lead singer limelight” and leading to jealousy. Hopefully things will not go that route! 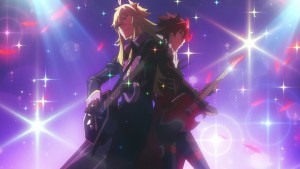 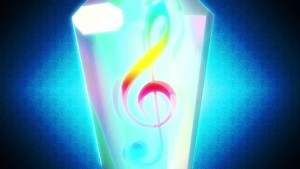