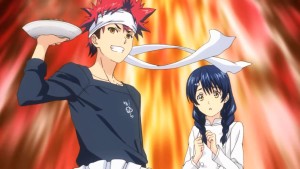 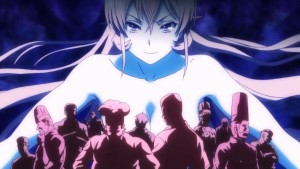 After five episodes of the Food Wars! The only thing I can safely say is that… I like it. I like it quite a bit.

Its hard to really call this show brilliant or amazing, but its definitely entertaining. This series can go so out there at times (to the point of being crass), and in other moments be pretty refined and generally just plain fun. And of course, this duality raises some pretty standard questions: Is the show just pandering to the audience in the cheapest way possible? Or is it satirizing food shows and the shounen genre in general? After about five episodes, the only conclusion that I’ve come to is that I really don’t know. I don’t know and I think that’s okay (for now…). 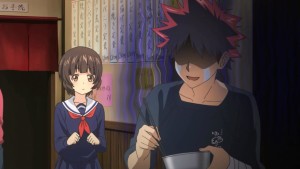 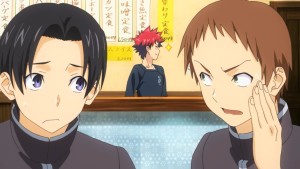 There are some series that just kind of go through a sort of identity crisis and slowly settle into whatever the core focus of the show is supposed to be. The major reason, of course, is that the first five episodes have been more about establishing the tone of the setting and just some general world building for the show, rather than actually bringing the central conflict or crux of the story front and center.

What I can gather from these first few episodes, however, is that this is a show that’s got some real heart behind it. There’s a very beloved look at the Japanese way of cooking and serving customers. This subject matter also pretty much makes up the foundation of the main character Souma. Souma is a cooking a genius, and one that prides himself on serving his customers, and doing things quick, effeciently while always making sure to get the best possible product out in the end. There’s a lot of parrallels to this show and a personal favorite anime series of mine Yakitate Japan.  Much like Azuma Kazuma from Yakitate Japan, Souma’s methods are pretty unorthodox, odd but really creative and based on actual cooking facts and methods. 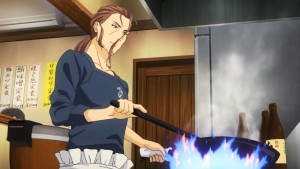 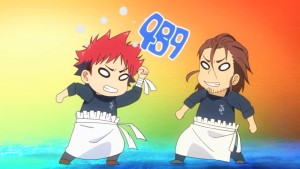 And! Much like Azuma Kazuma, Souma is a bit of an oddball when it comes to interacting with people, and most of that has to do with the fact that he’s brought up by his master chef dad, who is just as crazy. That’s the one major difference between Souma and Azuma, and it’s a pretty big one. Azuma was very much an orphan in his series, and the contrast to him gives Souma an interesting character arc where his end goal in life is to actually surpass his father, who he clearly respects and admires. Souma’s much more of a typical shounen leadas well and more of a teenager, which obviously makes this something we haven’t quite seen before.

Its in the comparisons to Yakitate Japan, a show that was hilarious funny and over the top while being tasteful, that Food Wars! also feels a bit cheeky and immature. 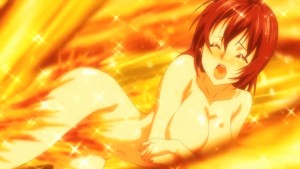 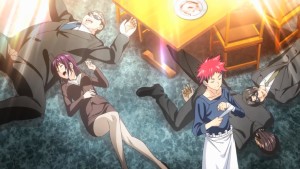 There’s the Food “reactions” for one, which are when the show really hits its absolute low point. I’m sure some people will argue that Food Wars! parodies the whole “eating reactions” from Yakitate Japan by adding ecchi elements and sexualising said reactions as its own little twist but… Again, I’m not sure whether it is indeed satire, or if its just the show trying to go for the cheap “sex sells” tactic. Perhaps it is, but what it actually does is make you laugh at the absurdity of it all, while also making you shake your head at it all the same. I’ll admit its funny but the fact that its pretty much a gimmick to get the various characters in compromising positions and for the seiyuu to make weird sexual noises, is not lost on me.

The humor can definitely be hit or miss, depending on how tolerant you are of such things. And while the sheer absurdity of it all works great in the first episode or two, the humor’s starts to lose its luster and sense of surprise from there onwards. Whether its a gag that has actual staying power and feel as fresh as Yakitate Japan’s stuff, remains to be seen. 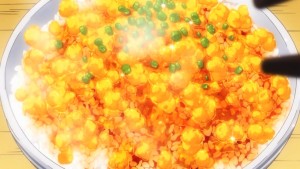 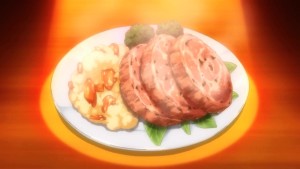 And beyond just the exquiste visual representation of food, there is a pretty deep underlying love of cooking in this show as well. All of that, buried between the over the top antics of the characters and the rather absurd world that this series is set in makes for a particular entertaining “dish”… XD 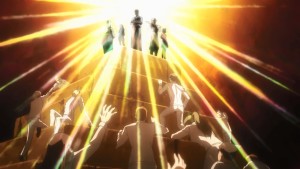 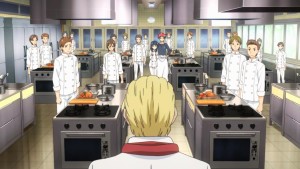 A good example of this interesting blend is in the series’ setting; An Elite Cooking school that’s pretty much the end all be all of the Japanese food industry, at least in this show’s strange version of reality. The school houses a bunch of students and faculty that can only described as odd, cartoony and over the top weird. Topping it all off is leading lady and possible villain Nakiri Erina. 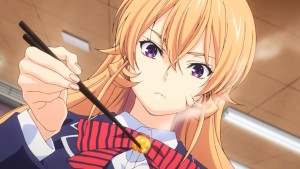 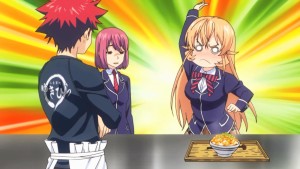 So Erina, is an interesting character. At first you’d think she’s the typical tsundere main lead, but, she turns out just be a stuck up rich girl. I kind of admire the series for making Erina dislikable, because the second episode doesn’t exactly show her as a standout person. She’s an elitist in the worst way possible, and that makes her the perfect foil for Souma, who is the creative genius that learned how to cook in a diner and generally had more humble beginings.

Erina actually ends up being the examiner for the upcoming first year transfers into the academy and runs into Souma there. Souma, of course,  had to join the school after his dad closed up shop and pretty much told him to start there if he hopes to surpass him someday. The resulting encounter is far from the standard “girls meets odd boy” scenario. On the one hand, Souma predictably creates something really good again, but Erina is just… repulsed by his methods and style of cooking. She can’t believe that Souma can make something that’s good despite not being “refined” and “elegant” like she generally desires. 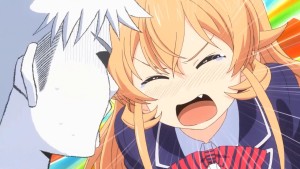 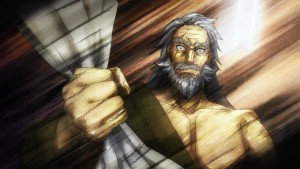 In fact, contrary to just admitting defeat, she flat out decides to fail him anyway, mostly because she just can’t accept that Souma and his way of doing things could actually work. Its an exceedingly narrow point of view and definitely made me not like her as a character. I’m sure that’s the intended effect though, as Souma’s creative cooking will go head to head with her “fancy dining style cooking” in the series.

Thankfully Souma doesn’t get the boot and is instead accepted because of Erina’s grandfather and head of the school, Nakiri Senzaemon. Senzaemon is an interesting old man that’s kind of like the traditional Japanese ideal of an old but stern man, a real authority figure. He’s a fairly standard head honcho type character that we see in anime a lot, so there’s nothing really too new here. He does add to the setup though, in a rather outlandish way. 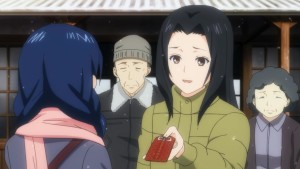 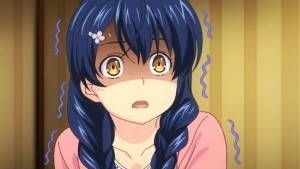 Since the first two episodes and a half episodes are largely setup for the series setting, I was curious to see how Food Wars! would proceed from then onwards.Well interestingly, its the rather large supporting cast of characters that get their introductions for the next few episodes.One such character, is Megumi, who I’m sure is probably going to be one of the many pairings that fans will be rooting for in the coupling/shipping wars that this show is sure to breed.

Megumi’s story is pretty standard but not a bad one. She’s the talented girl that left the countryside and her hometown and went to the big elite school to get better. Once she gets there though, things are hardly looking up and she struggles quite intensely. 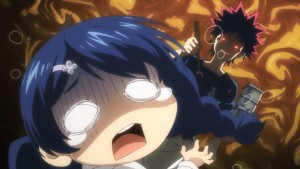 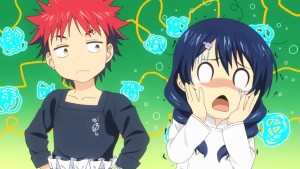 She’s got her own lack of confidence to deal with, and her meeting and pairing up with Souma is where the episode really works. Its like how Azuma benefitted from being paired up with Kawachi or other more standard characters that had potential, but were struggling to become great. Souma’s rather odd and confident way of handling things definitely changes Megumi’s perspective on things, and I like how the episode ends by showing Souma’s more… sadistic side of cooking. At the end of it all Megumi isn’t sure what to make Souma yet, and that’s a good point as any for the third episode to close on.

Then of course, episodes 4 and 5 really give us a look into what the series is going to be about, while showing us the rest of Souma’s supporting cast. Concepts like the Elite 10 get thrown in, which seems like this show’s version of a student council. Of course, in classic Shokugeki no Soma fashion, the whole thing is turned about to eleven in terms of how much power these students actually have. 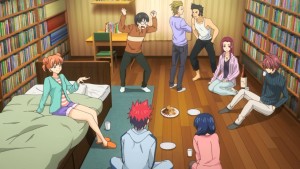 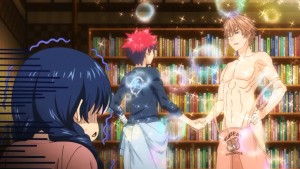 The dorm where Souma ends up living also gets introduced, along with a rather interesting bunch of kids. Chief among them is none other than Satoshi Isshiki, a rare third year in the school, and the number 7 of the Elite Ten. His little competition with Souma is pretty fun to see, and leads to a rare kind of comradery and rivalary between him and Souma. Souma ends up at least tying with him, as is the case with literally every battle Souma’s taken on thus far.

In some ways Souma kind of embodies the essence of my feelings for this show. At times its really fun, entertaining and even has some heart in it, but there are times when it just… degenerates into something more immature and crass, making itself look bad. The good is more plentiful than the bad though, which is why I really like Food Wars! and will be watching it regularly this season. 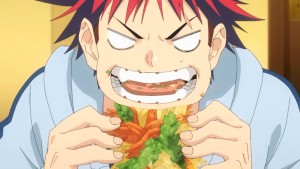 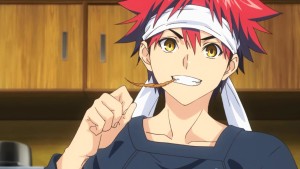 Since World Trigger has become all but watchable because of Toei Animation’s horrible padding tactics, I think this series will swap in nicely as a substitute. Too bad it airs on the same day as both Fairy Tail and Yahari. I suppose at least it’ll be a longer series at 24 episodes. The real question is whether this will end up being anything more than an entertaining but forgettable show.

For now, I’d say that Food Wars! Shokugeki no Soma gets a recommendation from me, but to very specific people. Fans of over the top crazy antics, and people who’ve obviously seen and enjoyed Yakitate Japan, and don’t mind a bit of crass echiness will enjoy this show. Yeah, that’s like… Me and the two other guys in the room. Sigh… XD 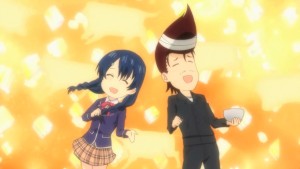 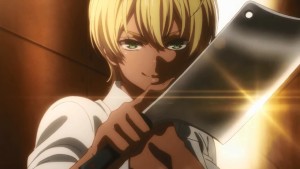 I’m aware that this show actually has 7 episodes out at this point, but the first 5 work as a pretty nice set. Since episodes 6 and 7 give us our first proper arc, I’ll throw this into a separate post.