Wow. If I had to summarize this episode in one phrase it would be “placing all the cards on the table”. There were a lot of reveals going on here, but interestingly the episode was also an “unwinding” one, with a bit more humor than usual (mainly provided for at the hands of President Maple and the members of Shingan CrimsonZ), and some relaxation at the beach, in the hot springs, etc., etc. The humor was not especially clever nor the content “original”, but it did work fairly well overall, and it gave occasion to reflecting on the effectiveness of the element of comedy over all in a work of creativity and some of the things that make it “work” and make it “fail”. 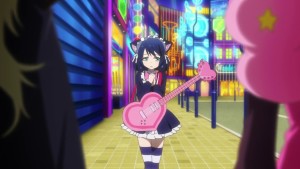 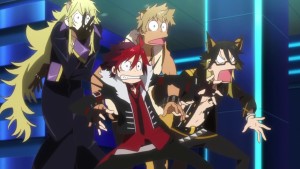 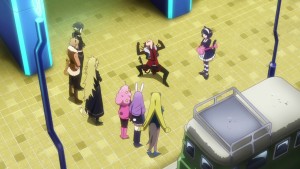 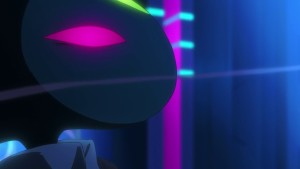 Well, first things first – essentially the beginning of the episode involved Strawberry Heart giving an infodump to all who were present (needless to say the members of Shingan CrimsonZ were just as shocked to encounter a talking guitar as Chuchu was last ep) – and it was quite a boatload of information too: Cyan is from another world, originally brought to this world by Dagger Morse – the President of Unicorn Virtual Music Inc. He brought her here for her skills as a musician to create the most popular, powerful band and solidify his position as the undisputed top dog in the music industry in Midi City. It was Strawberry Heart that foiled Dagger’s kidnapping plan, and together with Cyan drove off the dark monsters in Dagger’s control at the Trichronika concert. What’s more, both President Maple and Angelica knew everything that was going on, which was why Maple approached Cyan in the first place – he wanted Cyan to train with the members of Plasmagica to eventually be able to defeat Dagger Morse’s plans. So all of that is finally out in open and all are on the same page. One thing that has not yet come into the open, though, is the identity of Strawberry Heart – I am still pretty certain it is Grateful King in some way, shape or form. 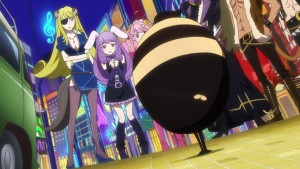 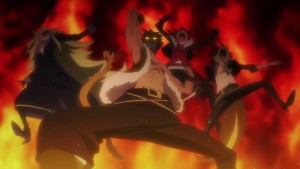 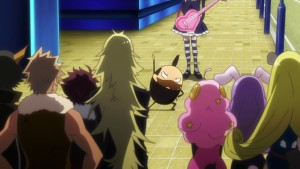 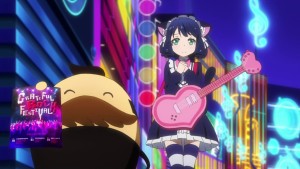 With this, all the members of BRR are on the same page and supporting Cyan and Strawberry Heart in their task (to varying degrees, of course), and the plan is to having a training camp in anticipation of participating in the upcoming Grateful King music battle – a fact of especial excitement for the members of Shingan CrimsonZ. However, training musically in preparation for the band battles is not the sole intention of President Maple’s to have the training camp. He (rightly) feels that the members of Plasmagica need to spend some time together and talk things out, re-developing their temporarily frayed unity as a group. So Maple takes the boys to the mountains in his van (another occasion for all sorts of effective comedy here) and Angelica takes the girls to the beach in a sorta semi-Polynesian style resort setting in a fancy pink roadster.

The main break relationship wise that needs some form of resolution is, of course, that between Retoree and Cyan, and the division is not so much due to anger but rather sadness (as Chuchu rightly points out). A curious side note at this juncture is the presence of other egg characters that both take care of the bands and appear to be directly related to Maple – kinda wonder just how big a family he has? Another curious thing is that all of the myumons we have seen thus far in Midi City are animal based in some way … but not Maple. And this, combined with the wide ranging family he seems to have sorta makes me wonder if there isn’t more about him yet to be revealed? 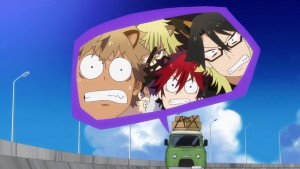 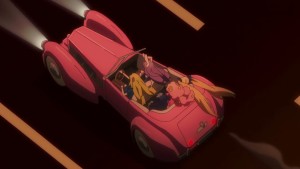 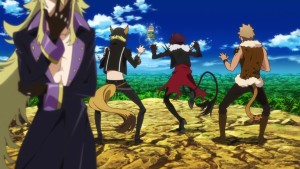 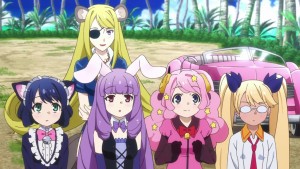 Interestingly the first approach Cyan tries with Retoree is a simple one-on-one with her. But sadly it proves to be a bit too much for the fragile Retoree to handle, even though Cyan’s nervousness is practically causing her heart to burst out of her chest. Both Chuchu (rationally) and Moa (zealously) want to help these two patch things up, but they are struggling with their own thoughts and worries at the same time. In Moa’s case her difficulties are pretty straightforward – hearing Cyan was hiding the fact that she was from another world was like getting shot with an arrow in between the chinks of a suit of armor; it was unexpected and painful, and she is struggling with whether or no she should come clean. But of Chuchu’s struggles we hear less.

If I had to guess I think she is wrestling with her ambition to become a top musician. Perhaps hearing of the great skill Cyan is supposed to possess (and that she was reminded of seeing ever so briefly when she drove the dark monster away) also stirred up complicated feelings? Throw the fact that she was not kept in the circle regarding Cyan’s identity by Maple and Angelica and you have a bit of a messy mix of things. Yet resolution does in fact come about between Cyan and Retoree, and in a way that was both expected and unexpected – Cyan, all by herself, begins to sing aloud of her pain and sadness. Retoree and Chuchu both hear it, and are cut to the heart – this song somehow slices through all words and disagreements as Cyan in a way is baring her heart to them … and they respond with equal sincerity. 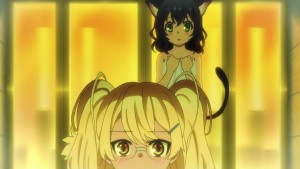 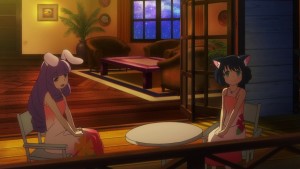 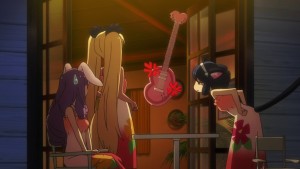 The sequence of Cyan, Chuchu and Retoree all singing together takes place at night beneath the light of a full moon against a meticulously and beautifully drawn background. But Moa is not present, and the other band members grow curious as to her whereabouts. We soon find out that she has gone off to sit by herself and try and sort out her uncertainties. All three go to look for her and in a touching and funny sequence Moa reveals everything about herself being an alien observer of the planet … and it does not sink in, somewhat to Moa’s irritation and bemused disbelief. So, taking a page from Cyan’s book Moa decides to communicate by another means other than just words. She summons her space ship by shooting out bright pink denpa wave signals from her angler-fish like antenna and makes everyone’s jaws drop. As if Cyan’s reveal wasn’t unexpected enough Moa dumps this on them – even Cyan was not expecting that plot twist. 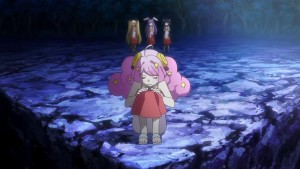 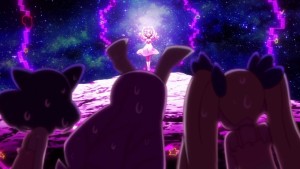 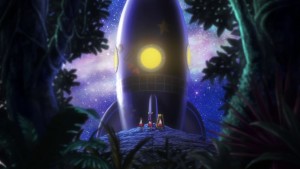 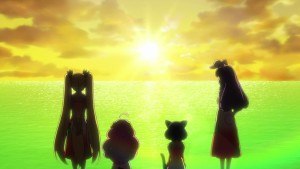 So all the members of Plasmagica are aware of both Cyan and Moa’s secrets. Retoree is willing to accept Cyan and even emotional loss to a degree. And Chuchu? Where is Chuchu in all this? In many ways she was the one who was least touched upon this episode, and I am quite curious to know what is going on inside her at the moment. But I am equally curious to know where the series is going to go from here. The preview for next episode seems to show the members of Shingan CrimsonZ being attacked by a dark monster, so that is one development – perhaps one can assume that it takes place at their performance at the Grateful King band battles? I was expecting that the reveals of this sort would be unveiled towards the end of the series (say, during episode 12 or so?) and that their resolution would be part of the “final arc”. But here they have been unearthed at the mid point mark of the series. Of course the open musical conflict with Dagger Morse and the dark monsters is still in the wings to begin, so that is something … but thus far the series has been quite dense in terms of story writing content. I am filled with curiosity and anticipation for the second half of the series in this light – hopefully that can keep up the same level of excellence and enjoyment they have created up to now!