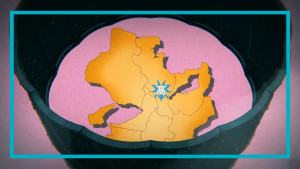 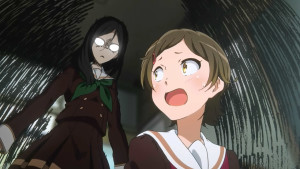 This was a good chance to focus on Hazuki a little as she hadn’t gotten much backstory. But at the same time the episode did a great job continuing its development of this large group. We get to learn more about the tuba players, about Kumiko herself, and even a little more insight as to Aoi’s feelings. The large cast can be a hard thing to juggle for a series, but so far Hibike is doing a great job handing them all and giving us little things to hook onto.

There really was a lot of good stuff in this episode. For pure nostalgia, I really enjoyed just having Kumiko and Asuka playing their parts for the euphonium section. Definitely getting the sounds right on the money and taking the time to make sure the fingerings are correct as well. It also served as some insight and a push for Natsuki to start practicing more. The seemingly quiet and sleepy euphonium player got knocked out of her static state. She’s kind of the example that Asuka mentioned to Hazuki. A first year has appeared who is actually really good and if Taki only wants 2 euphoniums she would be the one cut. If she wants to make it even as the third euphonium player then solo practice is going to be important. 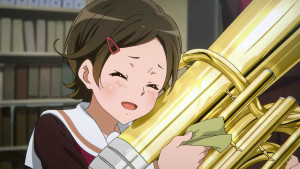 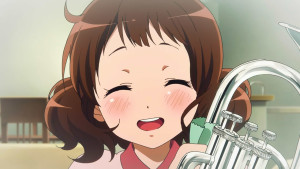 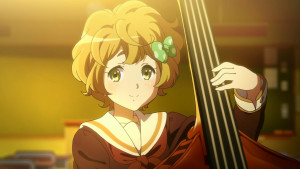 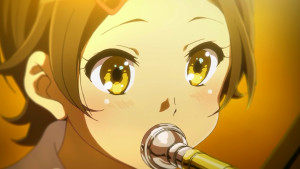 The episode was just full of nostalgia though. I think a lot of people can remember when they first picked up an instrument and started to get into it. There really is a fair amount of maintenance work that is needed for instruments like the tuba or the euphonium. I think Hazuki really is the perfect entry point for people who haven’t played an instrument. She shows both the difficulty of learning one and also the fun points of it as well. There is a lot of fun to be had in seeing yourself improve and also taking care of an instrument as you do as much practice as you can.

One thing I didn’t understand until they said it was the need for Hazuki to play in a group. I picked up the euphonium in music class so literally I was playing in a group almost immediately once I could get a sound out of the thing XD. But, I do agree with what the episode was saying. For bass instruments like tubas or euphoniums you really need to play in a group to fully grasp your role in the piece. On its own those parts are pretty basic. A lot of long notes that doesn’t really sound like music on its own. Unlike say a trumpet that basically has the melody the whole time and thus even in solo practice its easy to hear the piece. You wouldn’t have known it was “twinkle twinkle little star” just from the tuba part alone, but once Hazuki, Midori, and Kumiko came together….then it was a song. That was probably my favorite part of the episode, just hearing that and having Hazuki get hooked through that. 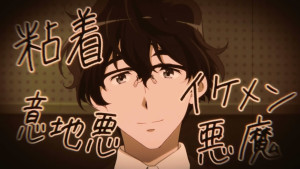 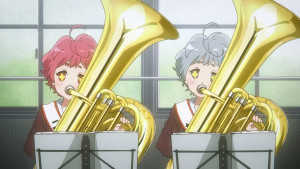 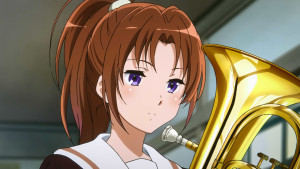 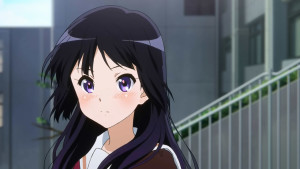 I think Taki’s move in this episode was spot on. You need to create the best group possible to crack the wall of the preliminaries. Normally it’d be natural to just take the 2nd and 3rd years since they’d likely be the best players, but that clearly isn’t the case here. You have Kumiko who is likely fairly better than Natsuki and you have Reina who may be better than some of the trumpets. It forces everyone to try and improve their playing which creates the most competitive band possible. It’d suck for third or second years who get cut, but that’s how it goes. The goal is the nationals and anyone who isn’t good enough….well they aren’t going.

This created some nice subtle drama. You could see Natsuki getting a bit pressured after hearing how good Kumiko was. Maybe she only picked it up in first year of highschool which puts her at an experience disadvantage. You can just imagine the drama that might be going on in the trumpet department with Reina’s ability to cause friction with her seniors. Kaori may be the big wall for Reina to go up against since that’s someone that even she considers fairly skilled “amongst her senpai” XD. I did like that scene for another Kumiko and Reina moment that built off the last one. I found it quite fun and cute to see her get all embarrassed by Kumiko getting a bit of payback on her words from last time XD. The relationship between these two characters remains enjoyable to watch every time I see some more of it. 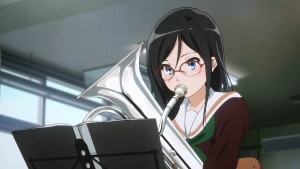 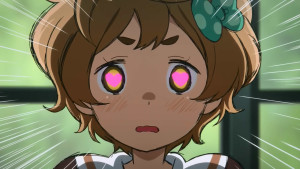 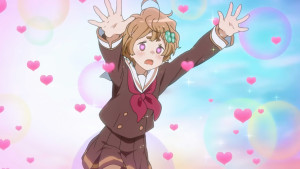 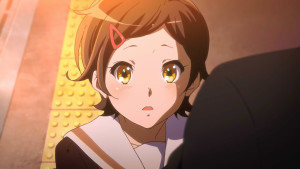 Another interesting angle for the episode to take was continuing to develop Hazuki’s interest in Shuuichi. I think it’s not an unreasonable place for the series to go. Someone on this cast had to be romantically interested in someone, they are in highschool after all XD. Plus it makes sense since he helped her out a few times and that’s enough to create some level of interest. Seems fine by me since it’s not like Kumiko is actively interested in him and it may even come to nothing at all. But it serves as a bit of character development for Hazuki. Another bit of character development for her was talking about her past exploits and how tennis didn’t work out for her. I can completely understand her throwing herself into this wanting to reach a level she’s satisfied with and wanting to be successful at something she dedicated herself to. Hopefully she and Tubacabra reach a level that she can be proud of.

I’m not sure what to say about Kumiko dressing up as tuba-kun…..At least that explains the preview image XD? Really it served more to ignite the love of Midori than anything else. It was hilarious just how obsessed she gets about that character. Also a bit of a cute moment when Asuka and Kumiko acknowledge that the eupho is always the neglected instrument. A nice instrument, but easily forgotten. It also reflects how negative Kumiko can get with how down she got after that tuba-kun incident.

Finally there was that small scene with Aoi and Kumiko. I’d say that safely gives the impression that Aoi isn’t planning on making the competition team. For whatever reason it seems like she’s given up and is focusing more on her studies. Maybe she feels envious because Kumiko has come in at at time when the band looks to be actually competitive and full of passion while she was there while it was a lazy group that never tried. At the same time she still cheered on Kumiko even if she was pushing herself to do it. I give Aoi props for that. 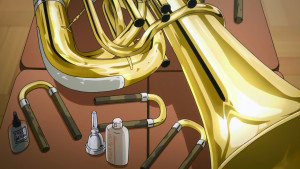 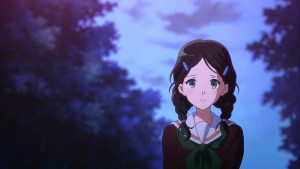 Just another really good episode for this series which I think is becoming the common catchphrase. It hasn’t had many if any bad episodes and has managed to push the story forward and continue developing the cast along the way. I look forward to the auditions which are coming up and the aftermath of that. You can imagine the drama will get pretty high once third and second years start getting cut and replaced by first years. Taki isn’t going to play favorites or bow to seniority, the importance is ability. It should be fun to see as well how well Hazuki can improve before those auditions and if that effort gets across. May not since I don’t recall seeing Hazuki in the performance in the OP, but you never know.
Score: A