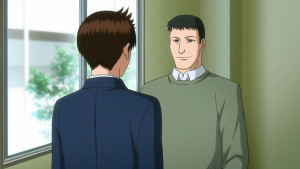 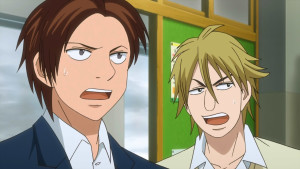 This was another good episode. It helped to both show Natsu’s side of things in the tennis world and also set things up for the matches ahead. It was the return to school in this second season and it served as a reminder that things are not exactly simple for Ei-chan. This may not have had any matches in it, but it was a good episode. Ei-chan now has a better idea as to how he can improve and the way he needs to train in order to reach the top levels of tennis.

The whole school scene was good in my view. Neither the teachers nor the students understand or see it. Almost none of these people have seen Ei-chan play or have followed his remarkable growth. They are just at the stage of “the bookworm is doing what?” I can understand the teacher being concerned for him, but it probably reflects his own bias. Perhaps both in not seeing being a pro athlete as a legitimate career path and not wanting to lose a top student to sports so he and the school have bragging rights. The students are far less forgivable. It’s clear those guys only care about Ei-chan’s notes and that’s his only value to them. People who can’t even bother to make up their own notes are complaining about him dedicating himself to something. I almost wish Kageyama had thrown a punch or something. They really just don’t know anything and it’s frustrating to watch them talk about things they know nothing about. 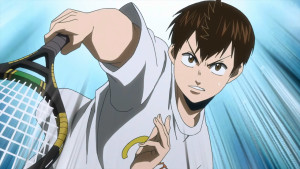 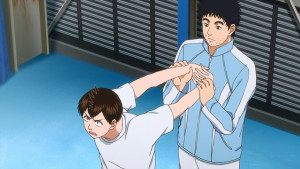 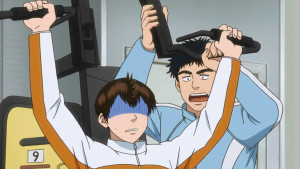 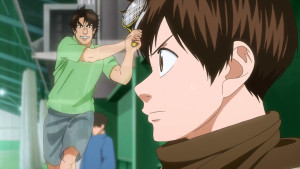 The focus on the serves was good and I’m sure will lead to him being able to finally use his serves as a weapon. He doesn’t have any godly physique to turn him into Takuma, but he does have good flexibility and with the proper training he can improve. His greatest asset is just his hard work and effort. Once again the best thing with Baby Steps is the detail they go into and the effort to make the development and growth feel real. We get to see just how Ei-chan is training and how that’s going to let him improve his game. I just found the whole thing interesting with the effort to improve certain muscles, while also avoiding strengthening others. You’d think that more muscles is better for anything, but when you want to move in certain ways that is not true.

It’s not only in the weight room that he’s working either. You have to appreciate the effort that Ei-chan puts in elsewhere. Watching other players again and again in order to update his notes is great. It makes sense too, neither he or his opponents are static. As they improve he has to take that into account, and also reflect his own improvement. His tactics for someone like Araya are going to be worlds different from what they were in the first season. He’s a much better player and can fight Araya in different ways. No point using tactics that don’t mean anything anymore. 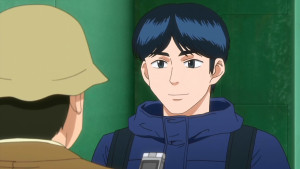 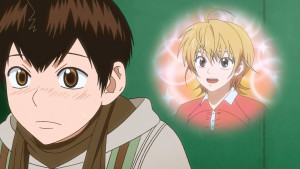 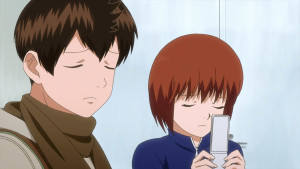 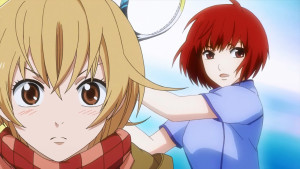 It was also good to see Nabae again. Maruo didn’t talk to him, but he did get fired up. This the guy he has to overcome. Their places and perspectives are very different. Nabae will go pro because that is the place he can continue chasing his ideal tennis. Maruo is giving everything he has to improve so he can make that goal. But in the end they may still have to fight in order to determine how things will turn out. I can’t wait for Aoi’s prediction to come true. For him to take the tennis world by storm and make them take notice of this guy.

Now to Natsu XD. I like how we finally got to meet her own rival. Shimizu seems like a nice girl, not some jerk. Just from that first perspective you can get a good feel for her personality. Someone who has been so focused on tennis that she’s weak in many other areas, like simply using a cellphone XD. Plus her mother being her coach is interesting in a few ways. That rarely is the case for someone who is as elite as Shimizu, normally you figure parents would actually be more of a hindrance. She does seem to have some interest in Maruo, but kind of a given. Someone helps you out like that and you’ll take some notice. 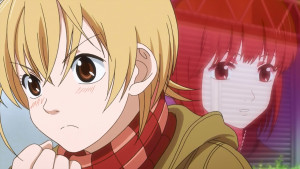 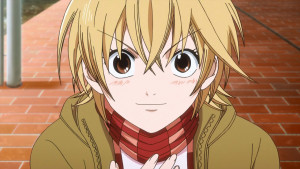 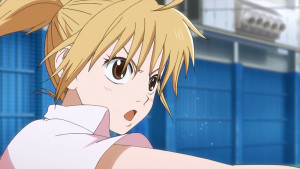 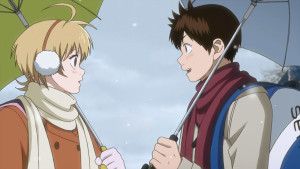 Natsu was great in many ways here. Both in her open jealousy about Maruo talking to Shimizu and also her open frustrations. Like Maruo we really don’t know the female side of tennis. It’s good to just see how hard she is working and that Natsu isn’t the Nabae of the female side, she is working hard and fighting like everyone else. She’s still up there, maybe like an Araya or someone like that. But you can feel the frustration she has in not overcoming this girl and not being able to beat her. Nothing wrong with wanting to beat the wall that has been up against her just once before going pro.

Also just cute how Natsu can easily say something like “I want to see you.” You know how she feels and so it’s clear she says that with pure honesty. It’s nice to see that kind of nervousness from Natsu in terms of first matches. It again shows that she’s not this perfect image. She has her weak points and people she struggles against. It makes her a real character and not just a love interest. 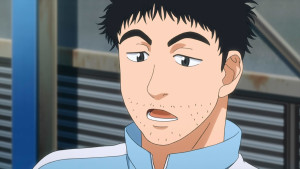 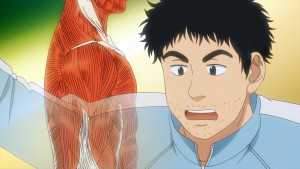 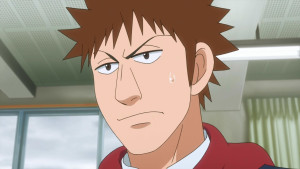 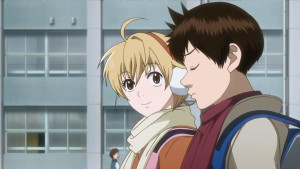 In terms of changes the interesting things I noted were both not in the episode. This is a bit about last week, but Aoi was a lot more harsh with Ei-chan about his desire to continue playing the match than he was here. Ei-chan trying to argue that he knew his limitations and how important it was to stop playing when you felt pain. But Aoi arguing back that basically Maruo didn’t know what he was talking about and inferring that was because Maruo really had never been actually injured.

Another minor removal was during the training session. All they really cut there was Aoi talking about how the STC wasn’t inferior to Florida and things of that nature. Which seemed a bit weird to me since they told him to go because Florida is ahead of things on that front. Seemed like a bit of nationalism from the manga. Maybe they didn’t feel it was necessary here since a Japanese player is ranked 5th in the world on the men’s side (with a Canadian at 6), where the closest American is somewhere around 18. Not major removals, but moments I was like “hmmm interesting they took those out.”

But while that all sounds interesting, the biggest thing really was with Kageyama. While the parts with the teacher was in the manga, the conflict between him and the other schoolmates was something new. It makes sense of course and shows both how good a friend Kageyama is and how people had been taking advantage of Ei-chan without caring about or believing in him. The types that shrug it off as being impossible and are just whining because they lost a study guide. I’m glad they added this in here, it was a good moment for Kageyama. On his own and without Ei-chan noticing, he’s got his friends back.

The discussion with Natsu was also a bit extended which I was fine with. It wasn’t a great deal longer, but the chat with the member of the school’s tennis club and just talking about the snow was new. I liked it since it lead nicely into the later discussion about aiming to win the All-Japan Junior together. 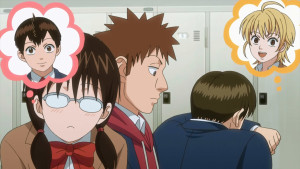 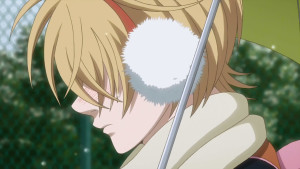 I really enjoyed the episode. Sure, we didn’t get into any matches but the series needs moments like these. Both to show that Maruo’s sudden turn into tennis player is still shocking to the people around him and also that Natsu has room to grow as well. Just a lot of nice little moments and it’s good to actually show training and characters working to get better. Any improvements with this show will come only after Maruo has worked hard to deserve them.
Score: A