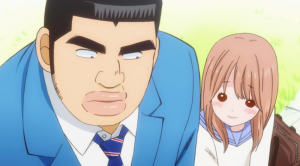 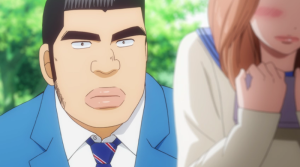 I’m not sure if they added the little Yamato figure to the opening theme’s cake this week or last and I just didn’t notice, but it left me in Cute Overload Mode before the episode even began, which is always a good thing. It also helps highlight the amount of attention that’s gone into this adaptation. Regardless of what you think of the content, this is a director and animation staff who puts a lot of thought and affection into the production, and it shows from the myriad ways they convey our couple’s uncontainable love-love (sparkles! bubbles! stars! doilies!) to the endless array of expressions. Takeo Faces alone could have their own Tumblr. 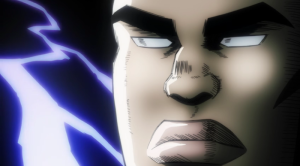 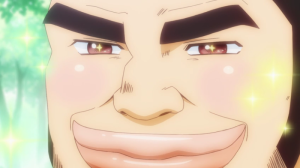 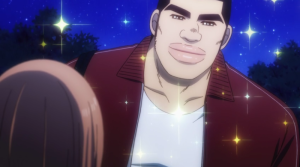 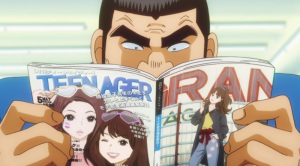 As for the content itself, there’s more to like than not here, although you do have to take some annoyances with all the good. Takeo finding himself within earshot of a potential tragedy (this week it’s a boy drowning in a river) will either strike you as an amusing running gag or an irritating plot convenience. For me it’s the former, especially given that his heroic acts (shielding a girl from a falling object, rescuing someone from a fire or a drowning) tend to be the kinds of things that Romantic Heroes do at some point to prove their worth.

Except that. You know. Normally Romantic Heroes only have to do one of those things once before everyone recognizes how awesome they are. Our Takeo though? He has to do all of those things, constantly. 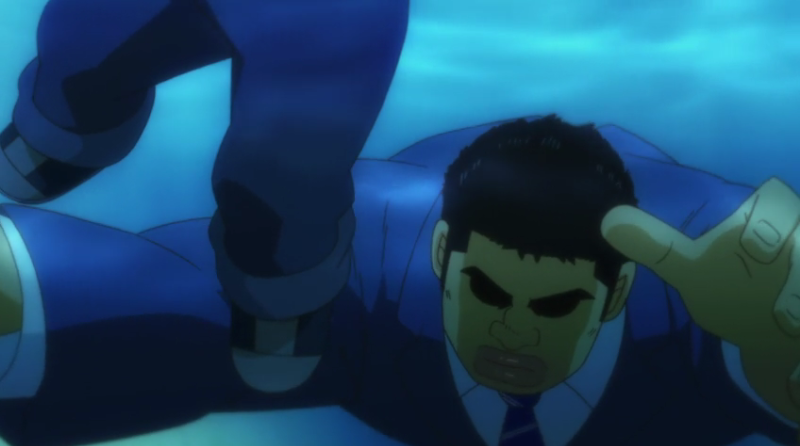 “And for my next trick, I shall adopt a stray kitten and nurse it back to health!”

Plot silliness aside, we also continue to have an increasingly glaring female character problem, where any nameless woman is pretty much guaranteed to be shallow and/or nasty. While I get that OreMono wants to tackle broad social expectations and prejudices, when the vast majority of your guy characters seem like decent fellows while all but a handful of girls are shallow and mean, the commentary begins to feel frustratingly one-sided.

Fortunately our named characters remain as likable as ever, as Afro Samurai Student demonstrates for the class when he spies Takeo and Yamato having an accidental collision on the train (made all the more awkward since Yamato’s face is basically at crotch-level). He films Takeo helping Yamato off the train only to have the doors close on him, and shares the video with the class. Naturally the girls refuse to believe she’s actually Takeo’s girlfriend.

Physical contact is the central theme of the first half of the episode, in fact: Takeo half-strips in front of Yamato, presses a hand to her face and leans in as if to kiss her (only to pull a ladybug from her hair instead), and walks her home under a sky strewn with stars which is all but begging teenagers to make out underneath it. Yet despite Yamato’s breathless blushes and comments about how “they’re all alone now, WINK WINK,” Takeo’s convinced she’s nervous because she’s so “pure” and swears to never lay a hand on her.

And meanwhile I’m over here shouting at Yamato “Kiss him, you fool!” but I get why she’s doesn’t. One, because she likely has little to no experience with relationships. Everything she knows about romance comes from what she’s read or been told, and most of that says the guy’s the one who’s supposed to make the first move, so Yamato almost feels like she can’t say or do anything here. And two, there are some serious logistics involved in this. I mean, just look at that height difference! She can’t exactly lean in for a quick peck on the lips. This would require planning. A stepping stool, at least. Or possibly a series of pulleys. 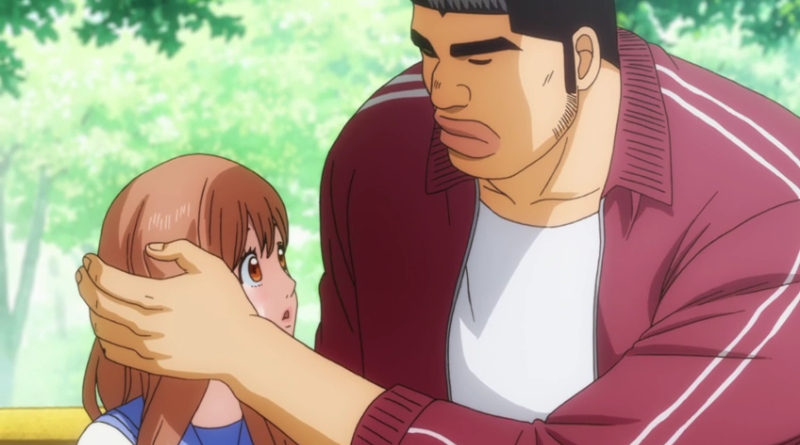 Scale that mountain, Yatchan! Shimmy up him like he’s a redwood tree!

Clearly we need a new character to help nudge these lovebirds to the next level. Enter Sunakawa Ai, local Best Boy’s older sister (we technically met her in a flashback a couple episodes ago) who’s come home from college to find that Takeo has gotten himself a girlfriend. She’s devastated and immediately suspicious of Yamato, convinced she’s using Takeo since “ordinary girls” wouldn’t be interested in him. Ai’s feelings for Takeo are somewhere between longtime crush and big sister—Suna himself can’t tell if she likes him or hates him—so she serves the difficult rom-com double-duty of “rival” and “protective sibling,” two roles that rarely lead to likability.

Her low opinion of Takeo and cynicism regarding Yamato put her right on the edge of obnoxious, but realistically so, at least: She won’t stop griping at Suna when they’re alone, but she’s perfectly polite when she shows up at their park “date” (if Suna’s there too, does it count as a date?), and she really does seem to have Takeo’s best interests at heart in her own roundabout way. 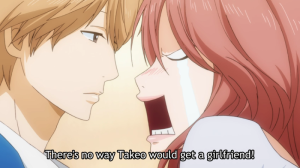 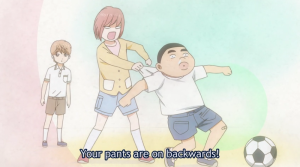 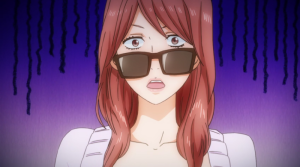 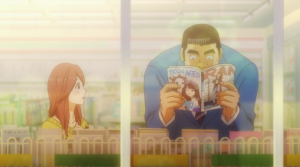 As a result, the park outing (which a lesser show would have filled with forced drama) is pretty pleasant, although Yamato herself is clearly in a bad place: She was so distracted the night before that she accidentally put salt instead of sugar in the cookies, she denies Takeo’s insistence that she’s a “good person,” and she gets real quiet and awkward when he says he likes her for her “pure heart.”

Ai’s convinced that Yamato has a secret, and she’s probably right, but she immediately jumps to the worst-case scenarios (cheating or planning to break up with Takeo). She even tells Takeo this when she runs into him at the local Kwik-E-Mart, studying teen girl mags in an attempt to learn more about Yamato so he can figure out what’s bothering her. 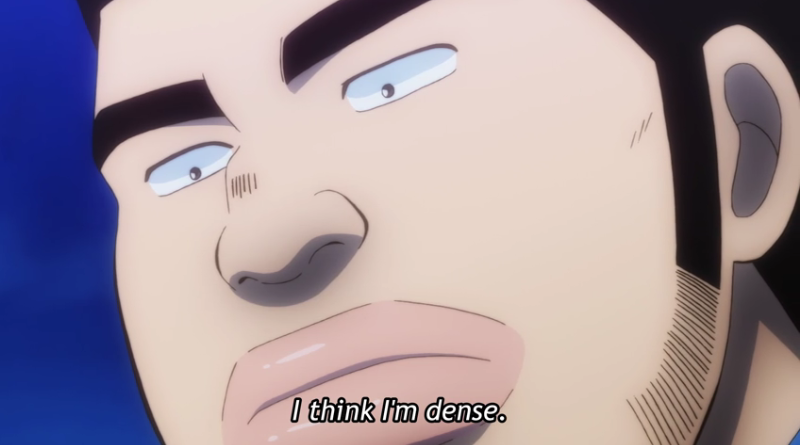 And knowing is half the battle!

So Ai offers to talk to Yamato herself, since it might be easier for her to open up to another girl.

I don’t think it’s a stretch to say that Ai is gonna be wayyy off-base about Yamato. I suspect it’s something much more innocent than any of her wild ideas. Like as not, Yamato just wants to get her snog on, but she’s worried Takeo will think less of her if she admits that she’s not as “pure” (whatever that means) as he thinks.

I very much hope OreMono goes this route, as it has the chance to once again stomp all over teen rom-com stereotypes, showing that girls do in fact have sex drives and that there shouldn’t be any shame in admitting it. While Yamato’s struggles against cultural expectations (which encourage girls to be innocent and passive) isn’t told through her eyes, it’s still as much a part of the story as Takeo’s (or Suna’s) own problems with the way society expects them to act, and rings just as true. All three of our main characters are fighting between the way they are and the way people think they ought to be. Sounds like high school, all right.