I tell you – this series is going to be the death of me – not only does each ep has soooo many things going on in it so far, but it is well written; events have proceeded and arisen in a believable, non-rushed or inconsistent manner, yes, but with this episode especially things came to a head, and the proverbial hit the fan much earlier than I expected it to! This series has really been able to deliver for me, but even so I have experienced an odd dichotomy with it – one part of me can totally understand how it could be a turn off to many viewers and simply not click with them, but the other part of me does not get it. This has been quite well done thus far, and well done on so many levels too! I guess in some cases it boils down to tastes, dispositions and aesthetics after all … even so, I am very glad this series was made and, as odd as it may sound I am glad that I am “able” to enjoy it! 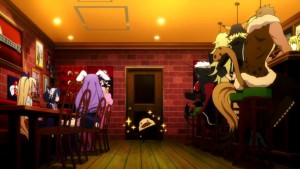 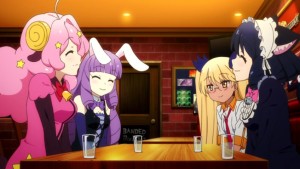 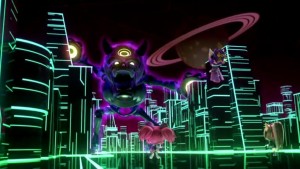 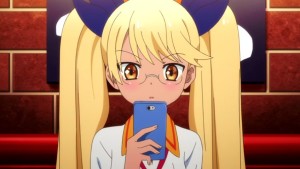 There were many, many things going on all at once, and I think one of the things I find myself thankful for is how “up front” and “easy to understand” these elements are – not a lot of poetic suggestions or symbolic hints here (at least as far as I have been able to see thus far). The difficulties mainly come from trying to keep them all in my memory. The story essentially opens up with the information that Shingan CrimsonZ and Plasmagica both are signed up to participate in a well known “Futures Indies Band Competition” – an excellent opportunity and/or potential stepping stone to greater fame for both of them, and both bands fully realize it and are excited by the fact.

The good news, however, is cut short when Retoree informs everyone that land episode’s megahit band Tsurezureraru was attacked by a dark monster during a performance. They were able to escape, but the lead singer Darudayu was injured in the process. Chuchu suddenly recalls how Cyan was able to single-handedly drive off the dark monster that attacked Trichronika (in episode 1) and asks about that, which causes the shy Cyan to respond nervously and evasively, raising Chuchu’s suspicions we saw in last episode even more. 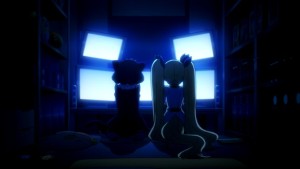 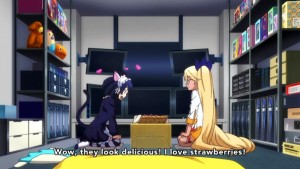 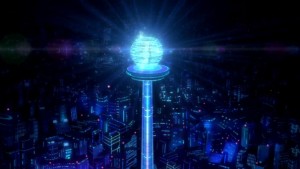 As they are all about to head off to sleep Retoree invites Cyan to do a little research with her, and it quickly becomes some “quality bonding time” for both of them, something Retoree (and Cyan, I think) both have needed badly for some time. Suddenly the viewers are switched to the infamous BBEG’s “lair”, where he is verbally sparring with the nigh-imprisoned Grateful King. This is the first time we hear Grateful King speak “in real time” (not just in past events being remembered) and yes – his voice really, really reminded me of a more controlled version of that used by Cyan’s guitar Strawberry Heart. After resisting and “thumbing his nose” at the main villain of the series, who is in fact named Dagger, the latter gets a video call from Ogasawara again. It was Ogasawara who attacked Tsurezureraru once again, but failed, and Dagger is not pleased at all, and muses how he will “have to get serious” soon.

We also see another interesting thing hearkening back to the first episode. We see Unicorn Virtual Music’s main office building and it was indeed exactly where Cyan was heading in episode one before being deflected off in the direction of the Trichronika concert. Later on in the episode we see Strawberry Heart is able to launch both itself and Cyan through the sky like a meteor in order to get some place far away very quickly – travelling in the exact same way Cyan did in the first episode when she was hurtling towards Dagger’s building and then suddenly tossed off to the concert. Which means it was indeed Strawberry Heart that saved her at the time, and very likely the direct influence of Grateful King himself. 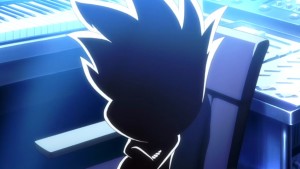 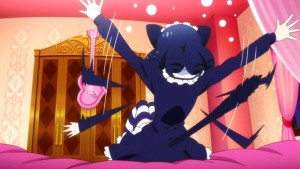 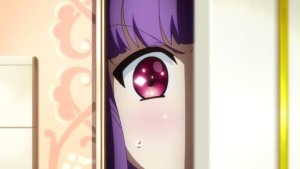 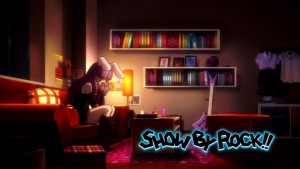 By now Retoree and Cyan are done visiting and back in her room Cyan is suddenly aggressively accosted by Strawberry Heart, who seems to have had a fire of worry lit underneath him of a sudden. While Cyan and her guitar are talking, though, Chuchu happens to hear them, and on peeking into Cyan’s room not only sees the guitar talking to Cyan, but also overhears some mind-blowing things – things like how Cyan is apparently from another world entirely and has been brought to this world to battle dark monsters. Many of Chuchu’s puzzlements and question marks regarding Cyan suddenly begin to come together in her mind, and she is obviously concerned and troubled by what she has heard. One of the biggest things she is wondering is: “How can she remain so calm and behave the way she has been if all those things are true?”

After resolving to try and speak to Cyan about it, Chuchu has great difficulty finding the right timing to question her, particularly as there are few days before the upcoming Band Competition and there are many things to prepare in anticipation thereto. It is in the confrontation between Strawberry Heart and Cyan, though, that we begin to see the ramifications of this episode’s title: “Maze of Destiny”. Cyan has perhaps not only lost her way on a larger level in the sense of what she was brought to this world to do, but she has lost her way internally as well, mostly due to indecision and her being able to experience a taste of something she has yearned for for a long time – being an active part of a band whose members are close with one another. 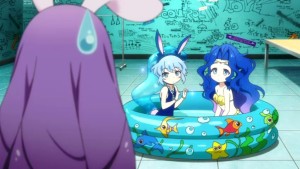 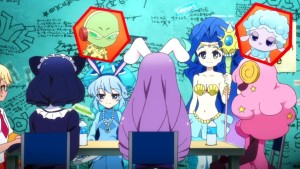 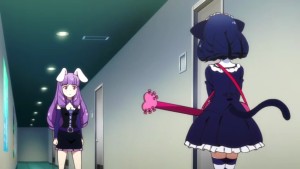 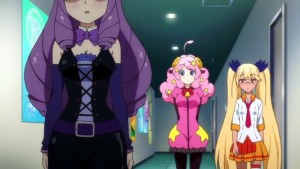 Finally the day arrives and Plasmagica heads to their waiting room , a room they are sharing with another band named “Shizuku Secret Mind” – whose members (Corriente, Wendy, Shabobon and Turtle) are from another of the city states named Venicillan. The two bands greet one another and while chatting away Corriente mentions the rumors going around about band members suddenly disappearing, and how some think the disappearances are related to the popular bands getting attacked by the dark monsters. Interestingly Chuchu does not let Moa tell the other band that it was Cyan who defeated the monster that attacked Trichronika. As Shingan CrimsonZ takes the stage, suddenly news comes of a dark monster attacking a concert of the group Ninjinriot at the S-River stage. This proves to be the final piece that makes the jenga tower collapse.

Cyan is practically yanked away by Strawberry Heart by force, and when in process of leaving (with terrible timing as Plasmagica was about to go on stage to perform) Chuchu tries to stop her until she is yelled at by Strawberry Heart to let Cyan go. Cyan runs away, leaving Chuchu in a state of surprise and shock. As it turns out Cyan arrives at the S-River stage too late, though she learns Ninjinriot was able to escape, and in fear that the monster might attack Plasmagica next she hurries back, only to find the members of both Plasmagica and Shingan CrimsonZ asking for explanations. When she finally mentions she has come from another world everyone is dumbfounded. While Moa is panicking inside (for completely different reasons) Retoree quickly realizes that Cyan will have to go back to where she came from, and this breaks her heart, causing her to run away in anger and sadness, while Cyan is weeping and truly finds herself in a very difficult Catch 22. 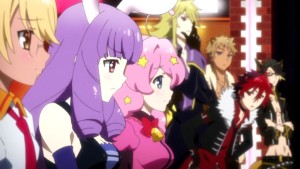 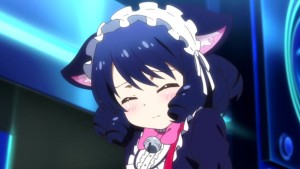 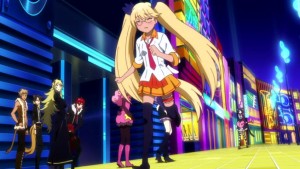 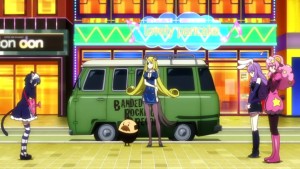 Part way through the episode we were shown a brief glimpse of the members of Tsurezureraru gathered around the bed-ridden Darudayu and mulling over the dark monster attack and how or why anyone would want to do such a thing. Darudayu (who is becoming an increasingly interesting character for me) gives a very “Far East” kind of reply: “If the world were a single road a straight, safe path will one day become boring to those who travel along it. When that happens, people will desire to walk on uneven paths that have twists and turns. However, evil lurks in the bends of that path…. After peace continues for hundreds of years someone will always appear who will destroy that peace – that is how the world works.” After saying this she then thinks of Cyan, and we suddenly realize why she gasped when she first saw Cyan last episode. She recognized Cyan as the one who had single-handedly, spectacularly defeated a dark monster, and did so with great power. And now as she is lying on her bed of recovery Darudayu muses how she herself barely escaped the dark monster attack with her life even with her bandmates present, and she begins to wonder with a warm disposition of heart what Cyan’s fate will be? Will it be good or bad?

This moment is a perfect summary of not only what has been going on in the series’ plot overall, but also exactly where we find ourselves at the end of this episode specifically. What will Cyan do now? How will she respond to the Catch 22 she finds herself in? How will the other members of Banded Rocking Records help or hinder it, and how will her bandmates? What will Moa do at the introduction of the objective possibility of someone being on that planet who is from another world? How will Chuchu, who has a very powerful ambitious streak (as shown especially in episode 3) respond to Cyan’s mission in connection with the band? And Retoree … well … Retoree is a whole different kettle of fish, but one who is perhaps the most similar to Cyan in inner makeup and disposition. Yes indeed … many questions here. Next week cannot come too soon! ^^