Wow – the story narrative suddenly became rather serious and became serious very quickly, too. I was not expecting it to develop in the direction it did, either! Even with the excellent development, though, my overall evaluation of the series seems to have settled in a particular place – and a place that reminds me very strongly of my impressions of a series from a few seasons ago: Sora no Method. Essentially there is a similar pattern – before the series aired I was looking forward to it with high anticipation, but when it aired it was overall enjoyable, but made what I felt to be bad choices in how the story was presented. In other words, it could have been much more powerful and had quite a bit of impact, but for whatever reasons the series decided to present things in such a way that did not allow for that to happen. So the result was “Pretty good series with great potential – but could have been better than it was. Dangit.” 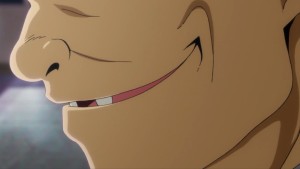 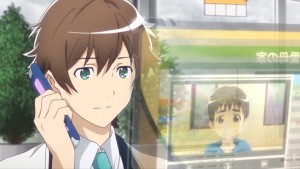 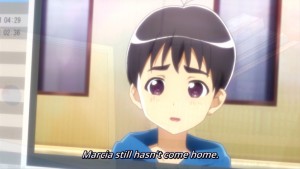 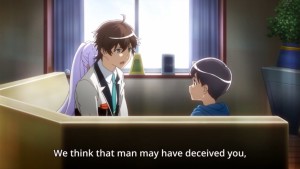 Last episode finished up with the Black Marketeer visiting Souta a day early to illegally retrieve Marcia. This pattern in and of itself raises a few questions, one of them being where the bad guys get their info from about Giftias needing to be retrieved? Do they hack the computers of the Retrieval Sections? Are they informed by insiders in SIA? Do they tail Section workers from the office to their stops? In any event we see that the way the Giftia is kidnapped is similar to how one would do so to a human. They were apparently just taser’d into unconsciousness and hauled off. We also discover a curious fact – the question is brought up as to why tracers are not placed in a Giftia for ease of tracking? (It could certainly help in situations like illegal retrieval.) We discover, however, that there are laws that protect the “rights” of the Giftia and feel it would amount to something like an “invasion of privacy”, so tracking devices are forbidden. This is interesting because it is one of the few times we hear of direct government laws involved in the matters of Giftia proper. 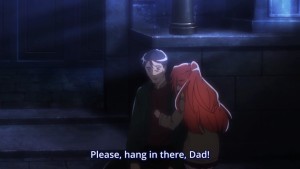 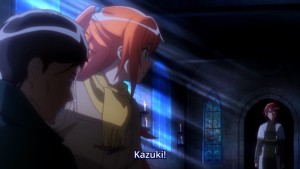 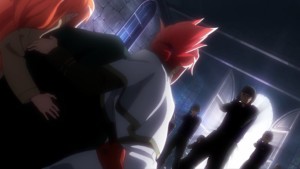 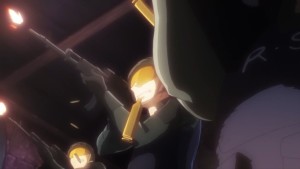 We also learn what happens when Giftia when they revert into the “wanderer” state. It seems that this is much rarer than I originally thought, as the last time it happened (at least in reference to the Section One retrieval center) was three years ago. Essentially when a Giftia lives past its allotted time it does indeed (as mentioned last episode) revert to solely instinctual, non-rational level, but something else happens – it’s “limiter” switches off, and it physical abilities go back to their potential, meaning many, many times that of a normal human in strength, reaction time, speed, agility, etc., though they are still able to be taken down by intense physical damage such as being shot by several automatic rifle. They are extra tough, but not invulnerable. I would assume the limiter was placed in the Giftia for emergency situations, such as a need to save their owners from a life-threatening situation or such. But it seems odd that SIA would not somehow make it impossible for the limiter to be switched off after a certain period of time to prevent something horrible happening. This, and a few other odd, illogical inconsistencies have made some viewers wonder if the technology of the Giftias owned by SIA may not be entirely of their own creation – that perhaps they had somehow unexpectedly discovered it and have tried to capitalize off of it despite their limited ability to fully control it. Something like this could definitely be a possibility in my mind. 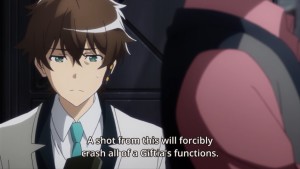 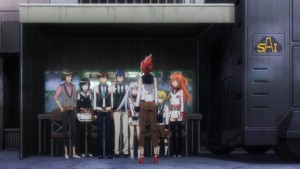 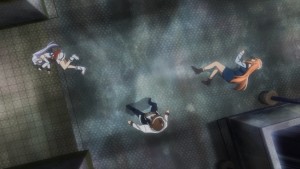 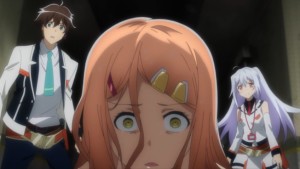 After Marcia is kidnapped and unfortunately reverts into the state of a wanderer we learn a few other things as well – It was Kazuki and Isla who were involved in the last Giftia retrieval that reverted to a wander on record, and it so happens that the Giftia in question was the “father” of Michiru. Michiru had not wanted her Giftia father to be retrieved and had apparently fled with him (something that reminded of the brief scene we saw in episode 1 when another owner fled with his Giftia – that was right before the famous scene of Isla falling several stories through the roof of the apartment complex’s garbage shed), and in process Kazuki finally caught up with them but was unable to retrieve the Giftia before SIA’s hired Giftia extermination force, known as R Security (who are accused of regarding Giftia as “things” at best), showed up and caused the Giftia to panic and accidentally break Kazuki’s leg before it was finally stopped by being repeatedly shot – we also can see a bit more clearly why Michiru is in the line of work she is in, how she could have made a beginning, and perhaps even why Kazuki is reported to have been extra “tough” with her until just recently. Just as SIA has a trump card for Giftia that revert to becoming wanderers, so do the Retrieval Section offices – essentially it is a gun shaped device that fires something like a computer virus into the Giftia that completely destroys the software side of them. This is definitely a last minute tool. 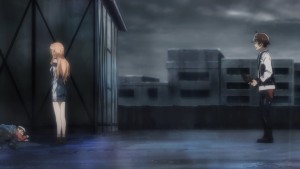 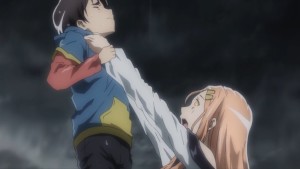 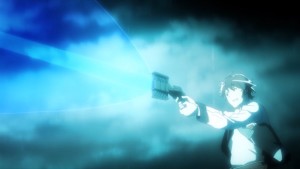 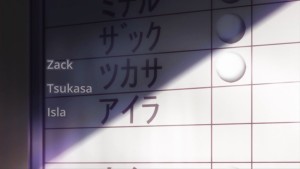 I think one of the more interesting things introduced this episode was the existence of a limiter to begin with – it may be that we finally have a key to the reason for Isla’s physical decline. I am willing to bet that Giftia have a limited amount of time they can operate with the limiter off, or if not directly this that the limiter being off takes its toll on the Giftia’s body. My guess is that Isla has turned off her limiter a bit too many times in the past, probably during her work with Kazuki in retrieval (although there may be other unknown circumstances where she did so as well) and it has resulted in her current physical state. It would also explain where she would get the confidence in her constant reassuring of Tsukasa that things would be okay and she would take care of things. I would not be at all surprised if she switched off her limiter for a short time and did something in a split second (say, to save Souta or some such?) and it took a toll on her already damaged body, accounting for her being absent from the “currently at work” board shot at the end. Next week looks to unpack more answers, but part of me is a little worried at the raw level of infodump in this episode – thus far the series has shown itself to me to be a little clumsy in how it handles things, but maybe the frayed ends of the rope’s strands will be able to be more skilfully tied together? Here’s hoping!