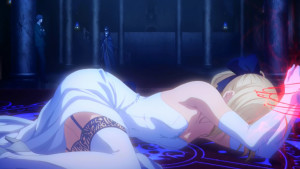 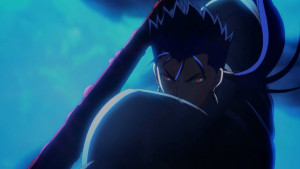 Ok, now this is the episode for UBW that I’ve been waiting for. They did a good job having some characterization with Kuzuki, but also a few really good fights going on at the same time. Jumping between Shirou vs Kuzuki, Rin vs Caster, and Lancer vs Archer. All of the fights had their positives and were entertaining even if Kuzuki and Shirou did get the least amount of attention. This was easily the most fun episode action-wise we’ve gotten in part 2 and it was definitely worth the wait.

It doesn’t seem like things are going to dip down in terms of action either. With Archer finally making his move against Shirou, there is no time to rest. Saber isn’t anywhere close to 100%, but it’s not like Shirou can last long against Archer without help. The only salvation is that the fight against Lancer and Caster going down leaves Archer with a limited amount of mana to work from. Sure, the Archer class has an advantage of independent action as a skill but that can only get him so far. 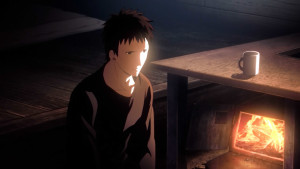 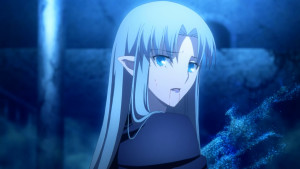 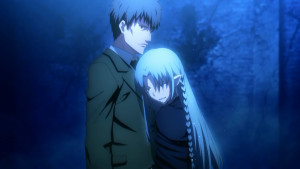 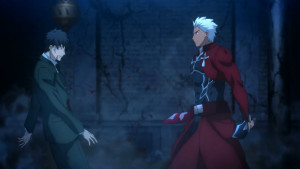 Not sure I feel much sympathy for Kuzuki, only that I understand him better now. He really was just like this from the very beginning. Not treated like a human being, never thinking of himself as one and used as a tool to kill. Still I wonder how the heck this guy ended up teaching in a school before this all started. Just shows how this war finally gave this guy something to try and accomplish. Certainly he was a weird and pretty messed up person, but at least he had a fairly noble objective. He just wanted to get Caster back home and help her accomplish what she set out to do.

On the other hand it was part amazing and part tragic to see how instantly he was cut down by Archer. That if anything reflects the massive difference between Shirou and Archer. Both using the same weapons, but it was insane how easily he took him down. Have to imagine that Saber would have been just fine if she hadn’t taken him lightly and been thrown off her game because of that shock. He did really just put Shirou against the ropes the whole time and if it wasn’t for Archer’s appearance at the end….things would have gone badly. That guy was powerful enough to completely turn the tables by himself. 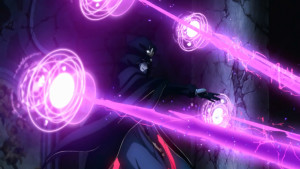 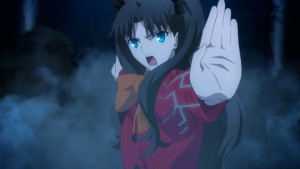 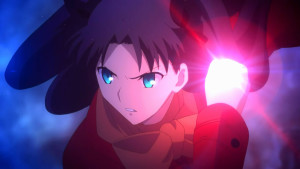 One of the highlight was definitely Rin and Caster. I really wondered what her strategy was going to be in order to overcome Caster and it was pretty well thought up. Of course it counted on Shirou being able to handle Kuzuki and being able to deliver a finishing blow herself, but as a whole it was a great plan for their underdog situation. It was a smart move to basically get Caster to become overconfident and take to the ground. As long as she was flying up there and blasting beams there wasn’t much for Rin to do. But all she needed was a quick opening and that did the job. Using her best stuff and playing the shocked and defeated mage did the job. Of course I’m sure on some level she was shocked at just how easily Caster could nullify her best attack, but it was still part of the plan.

Rin going all hand to hand on Caster was great. Certainly Rin isn’t the most powerful fighter out there, but if she boosts up her physical ability she’s more than enough for Caster who isn’t at all a fighter. They are both mages but it shows the gap between them in that respect. Caster came from a time when a mage really was just the range cannon, Rin knows you can’t afford to be that cocky and not have any means of fighting up close. The only issue for her strategy was that she is inexperienced at killing in close combat. If she had half the experience of Kuzuki it would have been over after the first couple hits. It was still a strong play and really the best Rin could do considering they only had Lancer as an ally but had to face Archer, Caster, and Kuzuki. 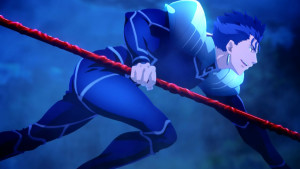 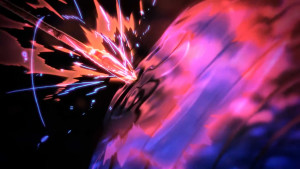 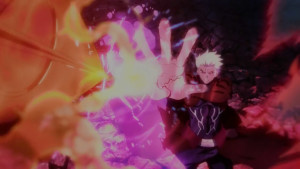 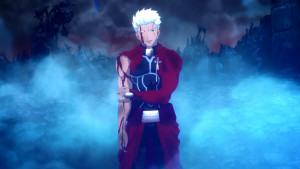 It would be a crime not to talk about Lancer and Archer though. That wasn’t the longest fight, but it had real intensity to it. You could see just how much harder of a time Archer was having against Lancer. A curious move from Lancer’s master originally having him hold back. It also showed the difference in their personalities. Archer really is willing to do whatever it takes to accomplish his goals. Betraying Rin gave him not only the chance to kill Caster when her guard was down, but also be able to kill Shirou. That command seal of hers for him not to harm Shirou was a major obstacle. At this point….it’s pretty darn obvious who Archer is. A gem of which only one exists in the world, using the same kind of magic, and even the similarities Caster mentioned in the first part. I’m just waiting on the show to officially drop the bomb on that one. It shows how far Archer has gone though. Talking down about heroic pride, willing to play things in such an underhanded manner, and no pride in his own swordsmanship.

I have to think on a certain level Archer was trying to bait Lancer’s best shot. If he knows that much about him then he should have been prepared for how Lancer would respond to so much provocation. Though of course maybe he figured his defense would work out better than it did. Lancer’s thrown attack was pretty damn awesome and Archer’s Rho Aias was a fancy and pretty powerful defense. It just wasn’t quite good enough to completely block that attack. If Lancer cared to he had enough left in the tank to take down Archer at that point. It really was just a great struggle between two powerful moves, seeing Lancer’s attack slowly break through the layers of the shield until that last moment.

In the end this game me quite a bit of respect for Lancer, he made sure to do his job. He wasn’t obligated to go any further than stalling Archer since by that time Caster was going to be defeated no matter what. I just have to respect someone who not only has that much pride, but also will get upset for people he respects. 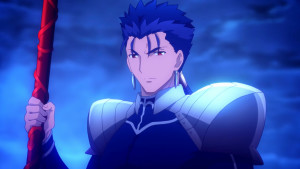 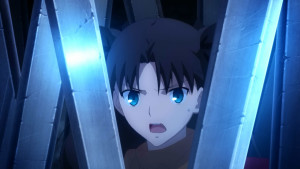 Now it should be interesting to see how things unfold from here. Saber was barely able to push Shirou out of the way of that sneak attack, Rin has used up her jewels, and Archer still has enough in the tank to kill Shirou. I’m sure the next episode will finally officially reveal his identity and explain just why he’s so determined to kill Shirou. Giving away that he isn’t just simply a heroic spirit, but a Guardian which has some serious meanings to it. At any rate this episode was amazing and I’m excited to see what happens next.
Score: A+