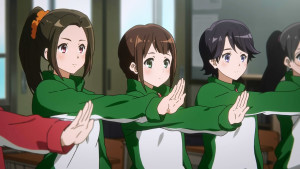 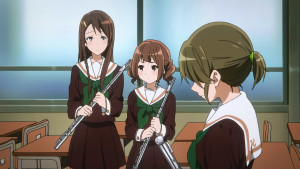 This may be the episode that makes me feel that this group has finally reached the starting line. This group has finally started on their path to being a legitimately good group, though it hasn’t been without pain and struggling. It should be interesting to see how they do at their first real competition and how they respond to that result.

Nothing quite describes this situation like a flute player literally breaking down in tears at the criticism. Not that I can’t understand being that upset, but it shows how this isn’t what the group is used to. I could respect how blunt Taki-sensei could be while dealing with those people. The fact that they aren’t all that good despite being second and third year students reflects partly not being very good, but mostly just not having put in the effort. If they practiced daily they would be worlds better than they are right now. Plus his criticism is completely on the mark. They had a choice if they wanted to slack off or even just play casually. They chose the harder road and will have to endure the consequences of that decision. 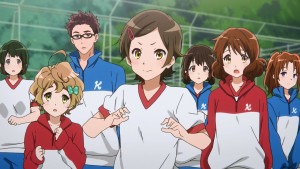 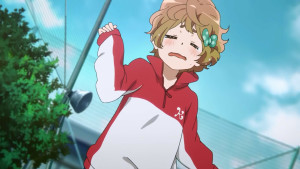 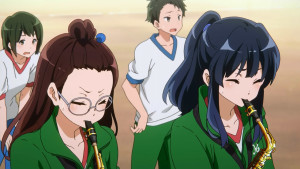 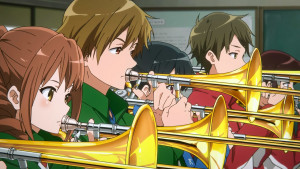 Honestly, I think it would have been a better move for Taki to start with this kind of instruction right from the start. Maybe he needed time to prepare and underestimated how much learning this whole group required. It was interesting to see him go through each section and give them specialized instructions. I don’t think his treatment of the bass section is a reflection of him giving up on them, but rather I think it’s more that this group has some of the more dedicated people and doesn’t suck. They have one newbie and one member of the “kind of lazy” group, but Kumiko, Midori, Asuka, Goto, and Riko all seem pretty solid performers. They were probably the group doing the most legitimate work.

Clearly things aren’t going as smoothly in some other sections. I kind of wonder how things will turn out in the trumpets, that seems like an area of much drama. There aren’t many new performers and the one that stands out….stands out for good reason. Both in skill and personality, Reina isn’t letting herself fall back into the background. We can see some of the disagreements that exists with the trumpet and trombones towards his methods. But I tend to agree with them. Repetition is the key to improving in music and they need to learn to focus on the details before moving onto the next part. 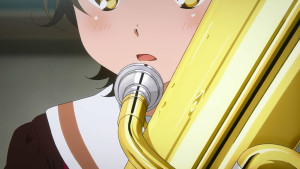 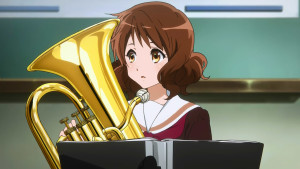 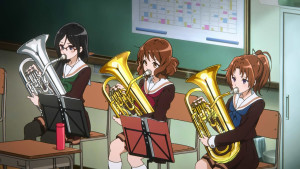 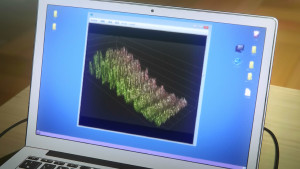 The guy sure knows how to push people though. I loved the idea of making them run and perform. That’s something I never thought about while in band XD. It’s a good method though since most of the instruments require a fair amount of lung power so that helps develop that and also just being in good shape helps the people who have to play and carry those heavy instruments.

The legendary lip slurs. Yeah, I can respect that actually being pretty difficult. Of course it’s really important so Hazuki having to continue working on it is necessary. It’s not just pressing valves that changes the note you are playing, but you can accomplish it via lip slurring and reaching different pitches. Once Hazuki has that down perfectly she’ll be one step closer to being a solid tuba player. One thing I appreciate with this show is that they do show the small steps and the techniques you really need in order to actually play an instrument. It does require effort and dedication to master the various techniques needed. 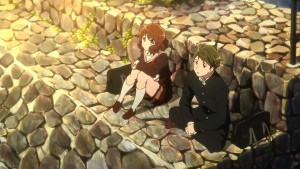 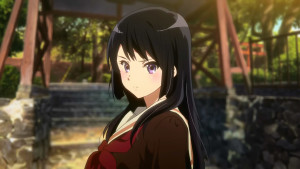 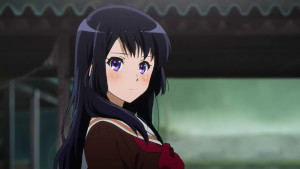 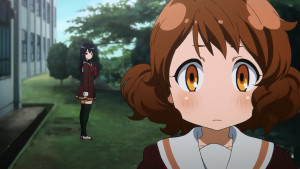 This felt like the first episode where we really got to see more of Reina than a previous scene here and there. She still isn’t hugely prominent, but it’s building up. Plus only so much you can do when the girl is in a different section than the main cast. It does give the impression that times are going to get tough for her. She’s been pretty blunt and in terms of music has been throwing down the gauntlet a few times. Clearly Reina doesn’t like that they aren’t practicing nearly enough to be competitive and is willing to admit that to Taki. I think she appreciates the fact that he knows what he’s doing (despite it being his first time handling highschool concert bands) and that he’s pushing things. Even if it means Reina is going to butt heads with her classmates it will force change and I think she and Taki appreciate that.

I did love how Reina actually got upset enough to approach Kumiko and Shuichi about it. I think she’s got enough knowledge about music from her own practice time that she knows how excellent an instructor they have. It was also kind of nice that she did call out Kumiko later to apologize for getting as heated as she did. I think she can feel a bit guilty herself for going too far. Though it kind of reflects her relationship with Kumiko that she was pretty brief, just calling her out for a quick apology and willing to leave it like that.

I was glad that Kumiko finally gathered her courage and spoke up. That could really be the trigger for their friendship actually getting started. I did find the slightly different visual style for that scene entertaining, with Kumiko’s eyes getting very narrow XD. The girl actually thinking that Reina called her out there just to kill her….on school property XD. I liked how Kumiko kind of just rambled through everything she wanted to say and then ran off. It showed her not being all that smooth at that kind of discussion, but it had meaning. You could see how she felt relieved to not make the mistake of leaving things unsaid and also how Reina looked happy that someone heard what she was trying to say through her music. 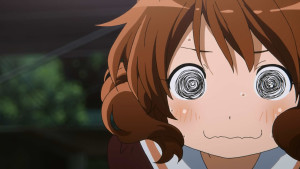 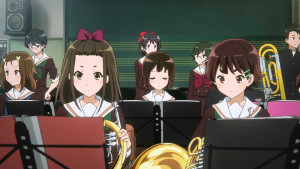 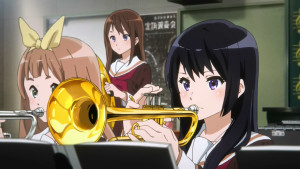 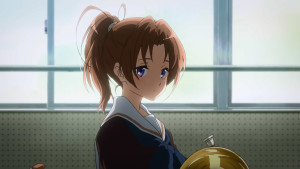 The episode just had a lot of nice little moments that made me smile. Kumiko building off her discussion with Reina to reaching out to Nakagawa was nice. I don’t think Nakagawa is all that lazy, but she’s not going to put in much effort if she’s not pushed. The others are mostly ok to let her just do whatever at her own pace. That scene showed Kumiko though that she can impact people and change things if she makes an effort.

Then of course was the performance. It was a simple song and the second time we’ve heard it, but it was worlds different. This really felt like a group united through frustration, but finally united and that was the key. It wasn’t 100% flawless, but it was actually music. You could feel the whole group having reached a point where they were serious about doing a good job. And they got a passing grade because of it XD. They have a long way to go to be competitive, but they finally heard what it sounded like to play properly. Now they’ve got a grind through the abyss to get through. The schedule ahead of them is rough, but I’m hoping they can get through it. 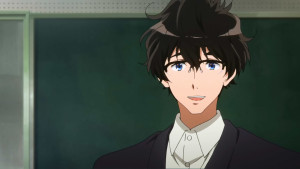 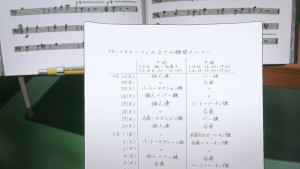 This was definitely another strong episode for the series. It didn’t have as much shock value as the group took last week, but it built on what we already had. I’m curious to see Reina interact more with the main trio and see how things turn out in the various sections. So far the group has been willing to suck it up and endure, but the really tough practice is coming up. Hopefully though they can understand that he’s literally aiming for the top and that’s what they have to do in order to compete with the best. Will see where things go from here.
Score: A