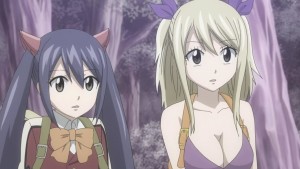 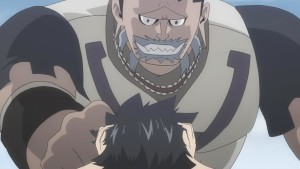 Its getting tougher and tougher to watch this series week for week due to how poorly this adaption is being handled. Its especially troubling because the actual story content in each episode is pretty engaging, even if the dose of said content is getting more meager with each new episode. I’ve lamented the longer recaps and recycling of earlier content in past episodes, but this week had us see both of those things in the very start and things got worse from there. The recaps, combined with the other delaying tactics prevalent throughout the episode have me wondering about Fairy Tail. Is this series too, falling into the inevitable padding trap that many a shounen series are trapped in these days?

We had a two minute recap this week, then the intro, and then another recycled scene inbetween the OP and the episode title. Beyond that, there was some serious jumping around again, something that bothered me in the Grand Magic Games Arc too. And I know this isn’t exactly uncommon. Both Studio Periot and Toei Animation do this with their shounen series (One Piece, World Trigger, Naruto Shippuden), and now its sad that A1 Pictures is messing up the pacing and content for their episodes and following in the trend. 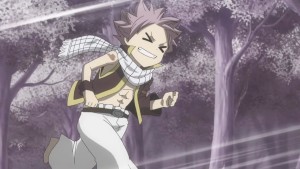 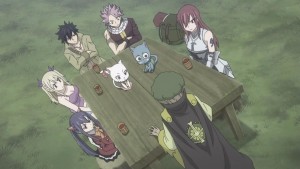 I think the reason it is so disappointing is that fans of Fairy Tail have had to wait for a whole year for the series to come back from its break. We then had to sit through fillers right after the series made a comeback, some of which were down right weird. And now… After all that, we’re not even getting a strong adaption of the manga material when it is time to see it. Its a lose lose situation all around, and while I love Fairy Tail in anime form, this is the first time where I’m really really tempted to just go ahead and read the manga. That’s not something I ever felt with the first series, which nailed pacing and the whole dose of content per week thing.

I think the biggest offender of the whole padding issue was Natsu. I simply don’t see the point of seeing Natsu running around aimlessly, talking to himself and trying to find this voice he’s seeking. It makes sense from a story standpoint that Natsu needs to go do SOMETHING while the other characters handle their battles, but a brief scene somewhere would suffice, not a retread of the same mundane run… Multiple times throughout the same episode. 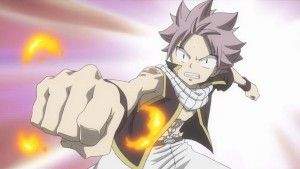 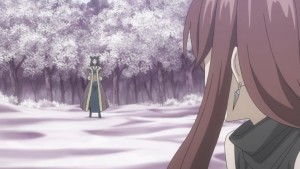 Comparing the franchise to its own self, we have had entire episodes in the original series where the focus was on a couple of characters and ONE  major battle or event. That worked so darn well. It gave the story focus, and gave us time to really absorb and enjoy one story beat at a time. Its unfortunate how much I end up comparing this series to the first one, these days. I’m aware as much as anyone how much I seem to repeat myself regarding all of this.

I’m not sure what the reason is, but I’m sure budget is also playing a big role in this. The series production values have taken a huge nose dive since the first season, and I wonder if this series is just severely under budgeted? I hope not, because the OP animations and the middle intermission segments give an entirely different impression. I suppose that only compounds in the hurt though. XD

And again, I wouldn’t be this annoyed or disappointed if the stuff we’re getting in the middle of all the padding wasn’t so darn GOOD. The fact is that the padding feels like a wall between the viewer and the story, and that’s just proof of the fact that something very wrong is happening. I really feel like we had several key moments that could’ve taken up half the episode, if done properly, and if needed, supplemented with some anime original material. 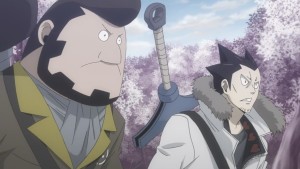 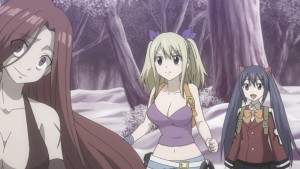 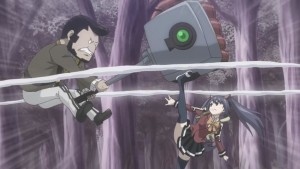 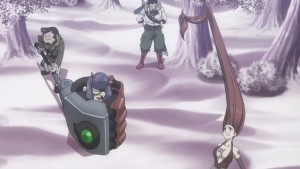 First there was the battle with the Treasure Hunters. I will say that I liked the battle and teamwork between Flare, Lucy and Wendy. The battle, for the brief few moments that we saw it, was pretty fun to watch. I particularly enjoyed Wendy rising to the occasion and just generally being more aggressive. Plus Lucy used her Celestial Spirits in pretty clever ways for a change. I’ve long waited to see Lucy actually use her spirits well, and she finally did. Flare also delivered the beating alongside dropping story hints here and there. There was even a bit where our heroines seemed like they were in a bind, before they turned the tables and things got really exciting!

Everything seemed like it was firing on all cylinders for a while… But then the cracks start to show. It was pretty telling when the scene that we saw done BETTER in the OP, fell flat in the actual episode with rather bad animation and art: 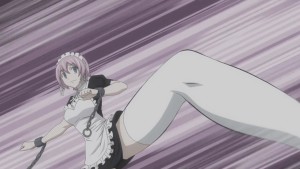 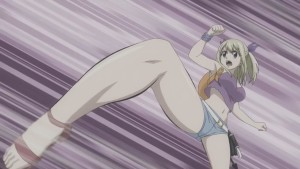 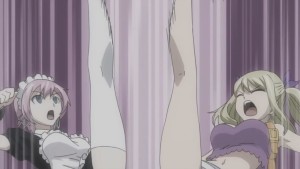 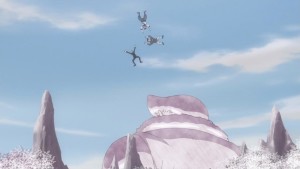 The Lucy and Virgo Kick combo looked so badass in the OP, that I was really looking forward to it, but instead we got… what we got. It’s just sad that the general animation and budget has fallen so much, that this is what we’re getting, actual scenes paling in comparison to the anime’s OWN OP. I just don’t know what to say beyond the fact that this is just horrifying to see happen and pretty upsetting.

But I will say that the part of the episode that truly blew me away was Flare’s back story. I thought One Piece and Oda-sensei had the patent on believably tragic back stories for characters, but Mashima-sensei was really able to weave a believable, sympathetic tale for Flare. 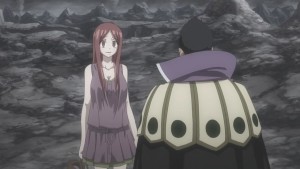 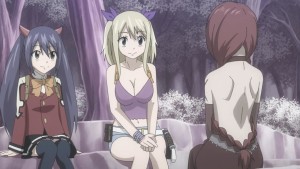 The whole thing about Flare being raised by Giants, and then the fear and difficulties she faced when she left all made sense. It was believable and easy to relate to. What was truly unfortunate was that Flare’s first encounter with a guild just happened to be Raven Tail. A poor, socially inept girl who hadn’t known better just got involved with a bad crowd and turned into a villain because of it. Okay, I’m sold! I’m a believer in Flare as a redemptive character now!

And the icing on the cake is that it was an encounter with Fairy Tail and Lucy that changed Flare’s perception of how to be. It also puts her whole awkward behavior and odd jokes into context, so yeah, I’m impressed. I’ve gone from flat out detesting Flare as an uninteresting and annoying villain, to liking her enough to think she’d be a good fit in Fairy Tail. Yeah, Mashima-sensei’s magic at work again. 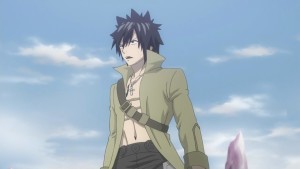 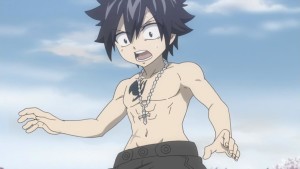 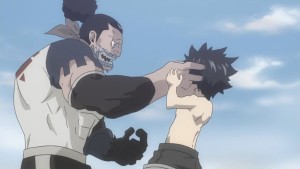 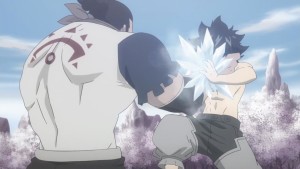 The Erza thrashing this week was pretty meh, but I did like how Gray got some focus and good moments this week. Whenever Gray arrives on screen I worry, as I’ve been burned by his appearances in the past. Contrary to what I believed , however, I have to say I quite liked what I saw this episode. The whole flashback trauma thing coming to Gray as he “retrogressed” was pretty well done, and then him breaking out of it by thinking of Ultear was just as great. It also made me wish for Ultear’s return as a major player in the story, even though that’s probably not going to happen. Having said that though, if her memory can power Gray to make more badass moves like this one, I’m all for it.

Gray fighting Doriate will definitely be the highlight of next week, but it got some good setup and lead up here. Its moments like these that give me hope and simultaneously make anguish over what could have been, with this episode. If the Flare, Wendy, Lucy battle had been given the due it deserved, or if the episode had just focused on that battle and ended with Gray’s setup, we would’ve been golden. The scenes for Natsu, Happy/Carla and Erza could’ve been cut out, and we could’ve gotten a well paced episode that just focused more on the meat and trimmed out the fat. 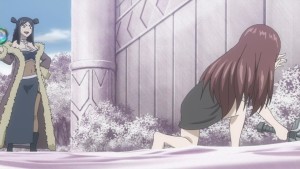 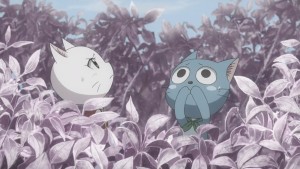 At the moment, being a Fairy Tail anime-only watcher is a double edged sword for sure. There’s some pretty solid entertainment hidden behind a ton of lackluster adaption and animation. Given that a lot of the production staff is the same, I’m wondering what really has changed between the first and second series that has brought such a disappointing result. Maybe all the budget is being saved for the upcoming Tartarus arc? I hope to God that’s true because I’m very lost as to why we’re getting what we’re getting.

My heart truly feels for Mashima-sensei. Not only is his storytelling better than ever, but he seems to be more involved than ever in the anime production. I mean, the ED artwork peices alone each week are evidence of that. At this point I’m just hoping things get better with the next arc, and we’ll just have to deal with what we get for this one. 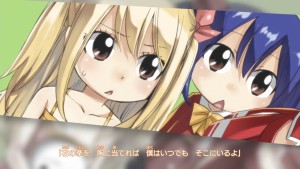 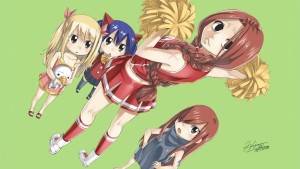 The danger is that Fairy Tail is failing as Anime series because of the poor adaption, animation and pacing, and is barely keeping my retention because of how engaging the story is. That’s not a great place for the series to be, especially considering where it once was… 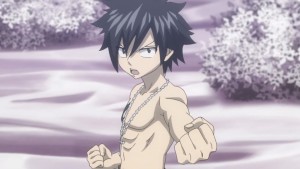 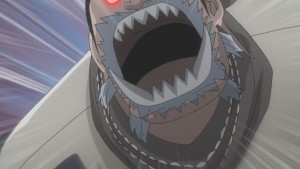 Gray’s battle with Doriate takes center stage next week. Lets hope the episode actually focuses on one major event for a change.