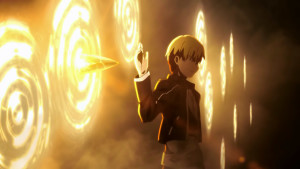 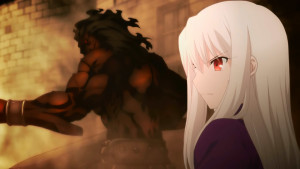 So this is it….this was the episode. Plenty knew this moment was coming and certainly while I was looking forward to the fight, I wasn’t quite looking forward to everything else that I knew was coming in this one. So Illya dies….in one heck of a tragic and sad state. Defeated, blinded, and stabbed. I’m not sure how one really starts to discuss this kind of episode. This was just a tough one. Dying in such a sad state after seeing how rough the life she’d been living was. This is the low point of this whole story to me. Illya looking forward to talking with Shirou and is cut down by this OP monster. I really wish the story just let Heracles break those bonds and rip that blonde bastard’s head off! I’m just going to throw that out there. That might have made this a far greater episode. Instead even after surpassing himself, even after giving all he had….Heracles couldn’t even avenge Illya.

Maybe it’s purely the fact that I enjoyed the Illya spinoff, but this was really a tough episode. The whole thing just focused intensely on how bad Illya’s life had been and how much she’d struggled only to die like this. Her entire story gets condensed into a single episode. Can only imagine Kiritsugu watching over this whole thing from whatever afterlife he happens to be existing in. 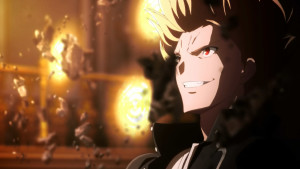 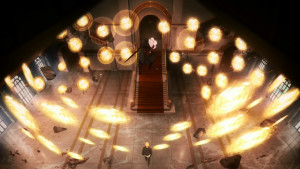 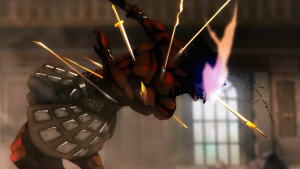 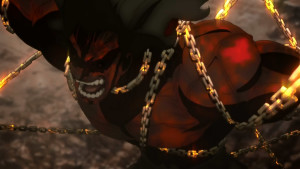 It might just be me, but I thought the Saber and Archer vs Berserker fight was a lot better than this one. I think this episode suffered from them having to cram Illya’s entire life story into a single episode like this. They had to spend so much time on what Illya has been through that they barely had time to show this huge showdown. We got some awesome sequences, but they were really quite brief and the most focus the fight had was at the point where it was really over and Heracles was just unable to advance and crush that blonde jerk.

It was just a tough fight in general. Having to play defensive to protect Illya and simply unable to do anything against that guy. Heracles had an awesome defense and durability, but the other side had nearly limitless weapons that could breach that defense. This was just a terrible matchup. I really wish out of anyone in the series Heracles wasn’t the one summoned as a Berserker. Such an interesting hero and all those great abilities completely wasted like this. He’s got better stats, but his weaponry and skills outside the revival ability are just not available. It seems like a bad idea to me to use him like that. Since as we could see, his improved speed and power wasn’t a match for pure firepower. 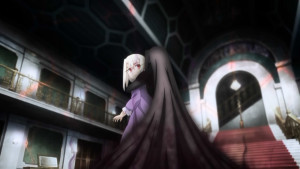 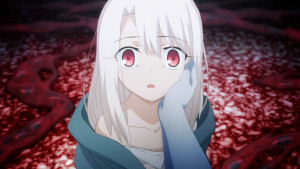 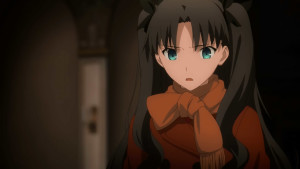 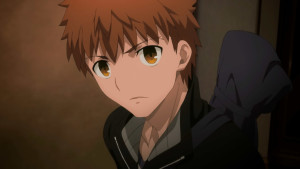 The Illya backstory was interesting and well done. I just think it’s a shame they didn’t spread it out more. I feel like if they could have done more of it last week and had more fight this week then it would have been a stronger episode as a whole. It was interesting seeing this dark form of Illya’s mother appear to in a sense haunt the girl. In order to explain or lie as to why Kiritsugu wasn’t coming home. Which of course wasn’t exactly true, but not exactly incorrect either. Even the second message had a mix of truth in there, but was twisted up to tell the worst story possible. Such a horrible thing really. The kid loses her mother, her father never comes back and eventually finds out he’s dead but has a kid. Which just makes the end result all the more horrible as Shirou is utterly helpless to do anything while (kind of) his sister is killed.

I think Rin was asking for the moon for Shirou to stand by and let that happen. There’s just no way in hell that Shirou could stand by and do nothing while something that horrible was happening. He clearly gave a very good effort to hold himself back, but there was just a point where that wasn’t going to happen. I have no idea how things are going to turn out with Illya at death’s door and Shirou now exposed. It will take a miracle to stay alive, but I say props to him for standing up since someone had to. This was just not something you should just turn your back to. 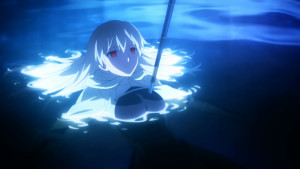 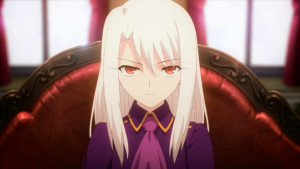 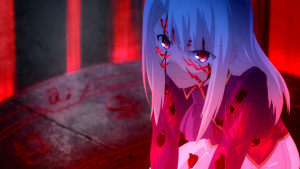 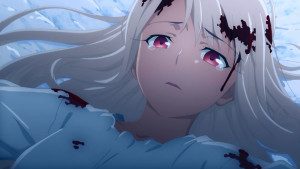 But yeah Illya’s backstory was all kinds of tragic there. Just seeing the mass of homunculi that had been created and disposed of over time. To be fair I’m not entirely sure I get what was going on there. I presume that they were trying to make a superior master to Illya in preparation of the grail war and eventually just gave up after dozens if not hundreds of clones were disposed of and abandoned. What I can get is that Illya felt a great deal of anger and frustration towards the Eiznbern family. They had been playing around with life all this time, using these homunculi as tools and disposing of them as such. What really gave those people the right to play god and create humans only to use them like this? No wonder her personality in the early episodes was like that. The girl had been through so much that it was just nuts.

The scenes with Berserker and the woods was well done. You can see how they really bonded and how he helped change her mindset for the better. Even though she basically abandoned him he still came to help her. And he was holding himself back and holding back all that power because even in his madness he knew it would bring harm on her if he couldn’t restrain it. Even at the end he couldn’t throw absolutely everything into the fight and maybe have a chance to win, because he couldn’t leave Illya vulnerable and alone. 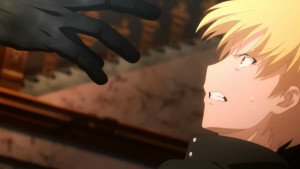 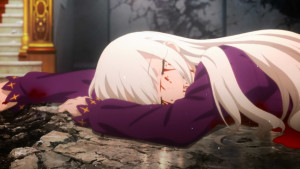 I’m willing to take some feedback on this episode to be sure. For me this was a lot harder of an episode to get through than it would have been for the average person. Illya wasn’t all that developed in UBW until this one episode so her dying probably wouldn’t have that much impact on people. But I’ve seen enough of the various series around this and the spinoffs that this was a really difficult episode for me to get through. Just having Illya lose the fight and get brutally beaten like that. Nothing will satisfy me at this point other than seeing that blonde jerk get obliterated and humiliated. His complete and utter defeat is the one thing I’m hanging on for right now. Forget Archer, this is the guy that needs to be utterly demolished.
Score: A-