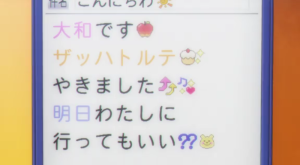 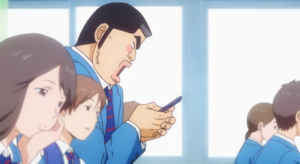 As expected, this is the week rom-com shenanigans and misunderstandings take center stage, as Takeo (almost willfully) misinterprets Yamato’s oh-so-obvious advances at every turn and does his ample best to give her a happy ending with Suna. As a result, Suna ends up taking more of a center stage this week, as Takeo tries to learn Suna’s “type” but doesn’t come up with much. Suna claims to be interested in girls, but says he finds the idea of a relationship tiring (I hear ya, buddy).

Oh, and just in case you forgot this was also a goofball comedy, all of this happens under Tina Belcher’s favorite tree. 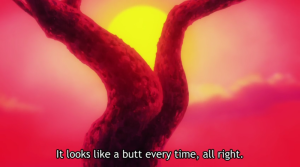 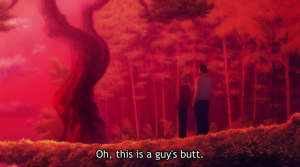 Later, the guys meet up with Yamato and her delicious sachertorte and Takeo proceeds to tell her a mess of embarrassing stories about himself (including one that involves the “Reg Ogre Who Cried” story we caught last week) that prove Suna has and always will be an awesome friend. If only Takeo could take the hint this time and let his Best Dude Forever hook him up with the girl of his dreams!

As an aside, I’m not usually one to talk about film techniques, but this scene in particular does some nice work with shallow focus, frequently blurring either Takeo or Yamato/Suna while the other remains in focus (shown below). It’s a quiet way to depict the rift between reality and Takeo’s perception of it, as well as the way Takeo generally feels left out from the central romantic action. As with all great comedies, there is an undercurrent of sadness here, especially in the second act, and the camera does a good job highlighting Takeo’s sense of isolation and loneliness, even as he renews his vow to make Yamato and Suna happy. 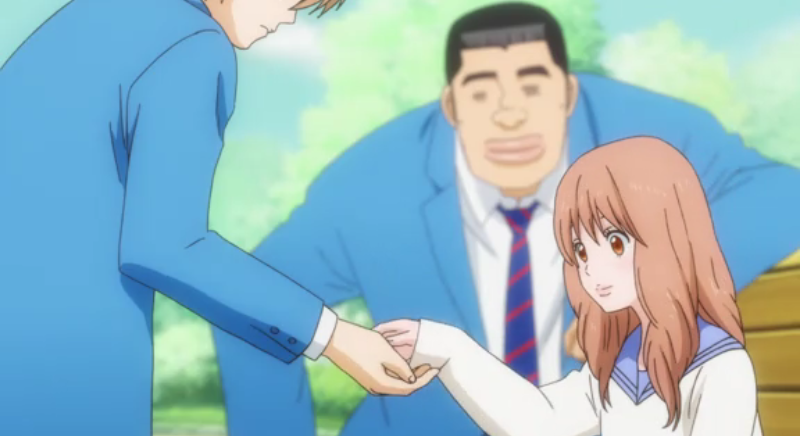 Things get suddenly and a little ridiculously intense when a construction beam nearly crushes Yamato (I hope someone got sued for that nonsense), and both Takeo and Suna rush over to help her. But where Suna (like most romantic heroes) shields the girl in an attempt to take the brunt of the blow, Takeo attacks the problem directly, preventing anyone from getting hurt.

He sees this as a weakness—“I can’t be the Knight in shining armor,” he thinks in a moment that’s surprisingly painful given that we’ve only known him for two episodes—but both Suna and Yamato seem to think otherwise. They return to provide some very literal support, and seeing their efforts gives Takeo the strength to toss the beam out of harm’s away. Yamato thanks him with a magic shoujo band-aid of love-love, and Takeo’s brain breaks from all the feelings. 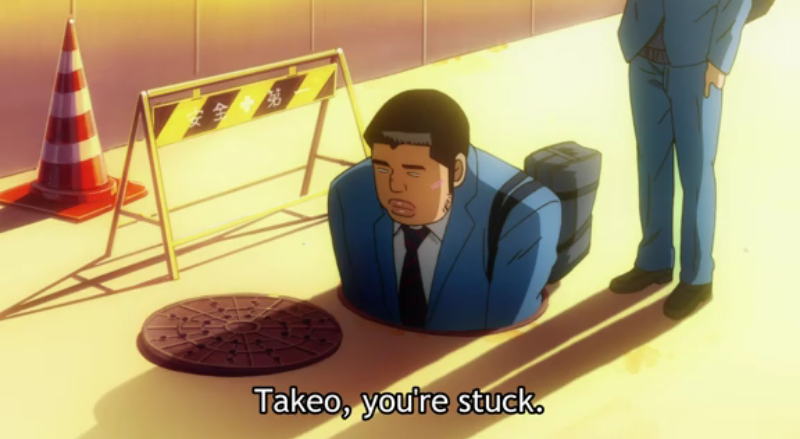 In soooo many ways.

I like my shoujo rom-coms to be able to do two things: (1) Present characters I care about and (2) give me something that’s just a little different from the norm, and OreMono sure seems happy to provide both of these. The first is harder to write about—you kinda just have to watch it and fall for these lovable dorks yourself—but the second is easier to pinpoint. There are so many little twists and adjustments to the traditional shoujo formula here, most noticeably in the subtle ways it flips both genre and gender norms.

Takeo (whose Total Obliviousness To People Liking Him rivals the densest of shoujo heroines) is the most obvious example, but it manifests itself in the other characters and their relationships as well. For instance, Suna has to put up with a lot of the expectations and accusations commonly placed on The Hot Girl, from the constant stares and whispers from passerby to Takeo even demanding he “stop doing the things that make girls like you,” even though he’s really done nothing except walk around outside (the nerve!). It presents a common prejudice in an uncommon way, and encourages the audience to think about the unfairness of such accusations when they might not otherwise.

As much as I’m enjoying both Takeo and Suna, Yamato has been the happiest surprise of the series for me. I was worried she’d fall into the “Boring Love Interest” category, but so far she’s thwarted expectations at every turn, proving to be not only unreasonably adorable, but also exhibiting far more forwardness and agency than her wide-eyed, cute-girl character design would suggest. 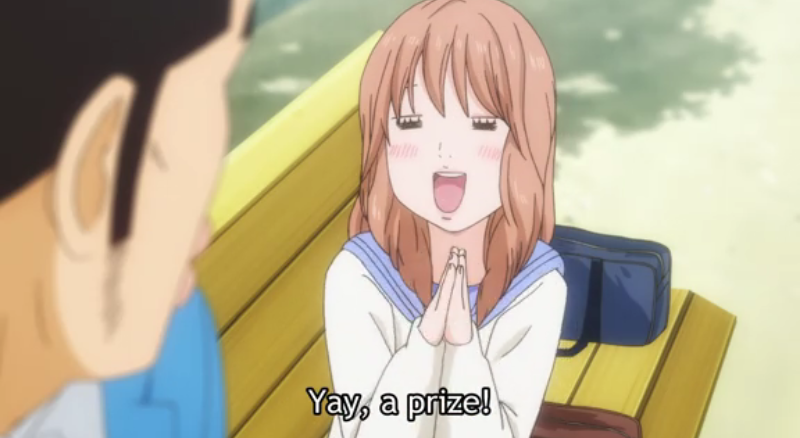 Shut up and take my heart.

Unlike so many shoujo heroines and heroes, she’s taken charge in forwarding her relationship with Takeo in a natural and realistic manner, from frequent, colorful texts (“the crap moves!”) to asking to call him by his first name, and finally to requesting that their next meet-up be “just the two of them.” She’s done everything except straight-up say “I like you,” and the fact that Takeo doesn’t realize that continues to be just The Saddest, as well as fantastically true to awkward high school relationships and the many insecurities which tend to come with them.

I also appreciate how there’s no real emphasis on Yamato “looking past” Takeo’s appearance (which, it should be noted, isn’t so much a matter of him being “ugly” as it is that people find him intimidating or scary) to see the nice guy underneath. She pretty much liked him from the moment she saw him, suggesting that she’s genuinely attracted to him. Heck, if Suna’s type is the Exercise Girl and Takeo’s type is “nice girls who get along with everyone” (another fact that smacks of sadness, as it suggests that Takeo’s just so happy when a girl isn’t terrified of him that he immediately falls for her), then maybe Yamato’s type is big, burly dudes who look about forty.

Her immediate crush on Takeo also helps sidestep the tired trope that women aren’t allowed to like people for their looks (they must see INNER BEAUTY only or they’re shallow and terrible) and instead suggests that there’s no such thing as an unattractive person—it’s all a matter of perspective and opinion. Here’s hoping OreMono can continue to push on that idea, and that Takeo can come to understand that he’s allowed to have a love story of his own. Because until he does, he’ll never be able to recognize Yamato’s feelings, no matter how much they both want him to.