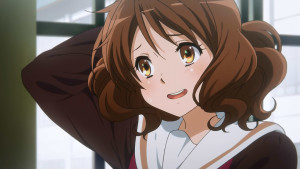 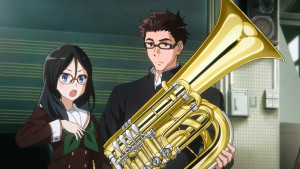 So this second episode did a good job delving some more into the relationships that are currently existing within this band and that was a good thing. It also confirmed everyone’s instrument though there’s little point in drama there about a show that’s got Euphonium in the title and the MC has one in the OP XD. Still the interesting part was more about Kumiko trying to duck the Euphonium rather than the fact that she’s playing one.

I can understand the desire to switch up instruments to a degree. Trying something new is a fun thing and this is a great environment for learning. But at the same time it is helpful when you have someone who plays an underutilized instrument like the Euphonium. The bass instruments are less popular in general (with some exceptions) so it’s probably a good thing someone experienced like Kumiko is going to play it. Sadly the bass instruments don’t have a ton of melody and are more support music for the piece which can be less interesting for some people since you won’t have nearly as many solos as the trumpets. 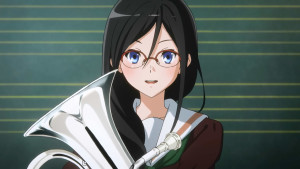 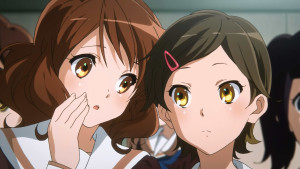 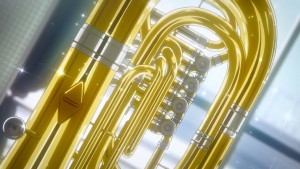 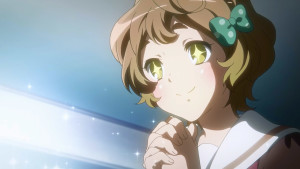 I’ve got to say I can totally relate to Hazuki. Not so much in buying a tuba mouthpiece, but how I ended up playing the Euphonium in school. I just could not get anything to happen with the trumpet mouthpiece. That mouthpiece is really small and some people just cannot get any sound to come out of that thing. Which is a shame since I also wanted to play the trumpet, but fell back on the Euphonium since I could get a sound from it and similar to Kumiko….there really was no one else playing it. On the positive side Kumiko is good at the Euphonium and Hazuki….well she’s been tricked into falling in love XD. The tuba isn’t all that bad, at least its memorable. Most people can at least recognize a tuba when they see it.

It was rather helpful that Midori was there to play the contrabass. That position will be all up to her, but better than the position being left unfilled. It does make you wonder why the heck Midori is at this school. She’s apparently coming from a pretty well off all girls school which apparently a really good music program. Shouldn’t there have been better schools she could have gone to? I presume she’s pretty good with all the passion she has for music. It’s kind of a strange mystery at this stage. Regardless she’s a really fun character in terms of how passionate she is. So hyped about playing the contrabass for the band and completely meshing with the second Euphonium player in the band. Both seem to be very….interesting people. 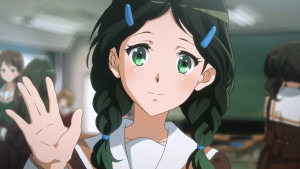 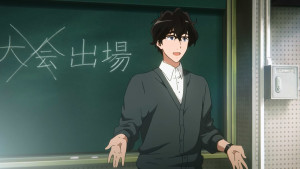 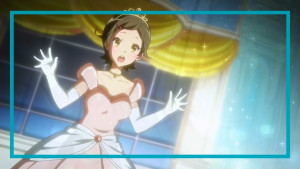 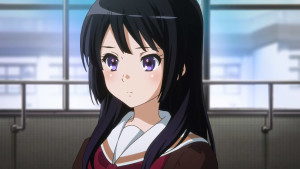 This episode just shows how the relationships within the cast are going to be a bit complicated. You have a huge band here and a bad that isn’t all that sure about what it wants to be. You could just see the band president getting seriously uncomfortable with the idea that she might have to decide the course. Everyone just seemed confused. I think the majority of people legitimately motivated to compete in the nationals are pretty small. And yet Aoi was the only one who was willing to raise her hand to object. Then you had Kumiko who was scared to decide one way or the other. Completely understandable and very human to take the route of….not choosing.

I found the discussion with Aoi interesting. It is a fair point that people tend to try and avoid butting heads especially in a group that big. Everyone just took the easy choice rather than get motivated about it one way or the other. I’m curious what she meant though by using that vote as an escape route. Is she going to quit the band and then use that vote as the excuse? Is she transferring schools? Something is up with that girl. Interesting as well how she and Aoi had those chats but at the same time she has this somewhat professional wall between them at school. I’m not sure what to make of that right now.

The Reina situation…remains not really all that busy. They haven’t really had a big friendship moment, nor have they argued. Maybe Reina doesn’t really mind what Kumiko said? I’m not sure either of them were wrong. I think it’s fair to get passionate about what you are doing like she was and be upset beyond belief that you failed. But it’s also fair that not many people were all that excited about making the nationals. I think it’d be nice if they were all passionate about making it, but hard to say if that happens. Here’s hoping that friendship gets a jump start since right now there wasn’t much going on there. 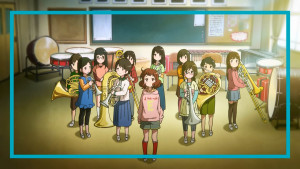 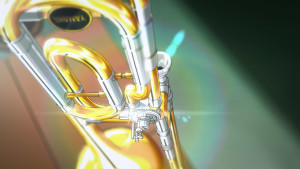 This episode didn’t outright blow me away, but there was good stuff in there. I found the teacher pretty unique in how he left the goal to the students and put some pressure on them to make their own decision. Plus I liekd how he really pressured on them to respond as a group. He didn’t just let the weak response slide. Aoi is a bit of a mystery right now, Hazuki finding her Cinderella with the tuba was also pretty darn hilarious. I have a good feeling for this anime. The cast is pretty interesting and everyone isn’t just a bunch of cliches. It feels like there is a lot going on under the surface. I’m curious to see how the story plays out. So yeah….I’m effectively on for the long haul here.
Score: A-