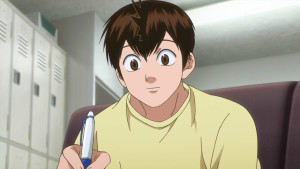 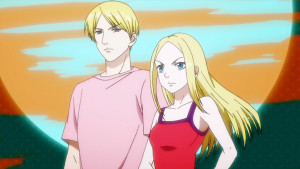 There really is nothing like a losing habit. It can be devastating and frustrating beyond belief in anything you do. But I’m sure for Ei-chan who has all this pressure and his future on the line it’s all the more aggravating to run into this wall that you don’t know how to deal with. This was just an episode to show how hard of a time Maruo was having here. It made sense to accept losing to a degree so he could adapt as fast as possible and try to improve as fast as possible, but it ended up having a serious impact on his mental state that took most of the episode in order to clear away.

It’s no wonder that Maruo was having a tough time winning to a degree. He basically spent the entire first week losing matches reaching into the 20s in terms of his losing streak. That’s going to start having a toll even if you can rationalize it. I can’t imagine losing that many tough tennis matches in a row, it’s no wonder that he only started to figure out the losing habit that far into this stay in Florida. 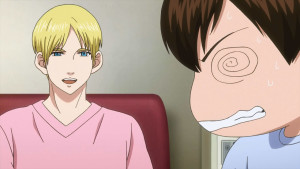 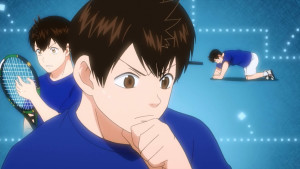 Really the key for the episode was dealing with Maruo’s losing habit and figuring out how to get past it. Everyone could see that Maruo was having a tough time there, but it took a surprising amount of time for it to be diagnosed as that. Maybe it was because up to that point he was continuing to improve his game and they could see results. But once it was pure frustration he was expressing then it was time for people to notice and step in.

The only issue there is that there really isn’t an easy way to deal with a losing habit. The most they could tell him was that the problem existed and he had to try and figure out his own way through it. An amazing tennis institution is kind of shaky there when they can’t give more concrete help on that XD. Come on Mike you are the mental coach, you’ve got to have more than believing in oneself. Well luckily I guess Maruo didn’t really need too much more advise than that. 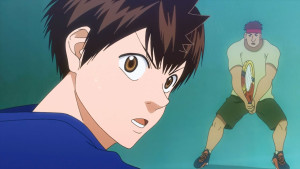 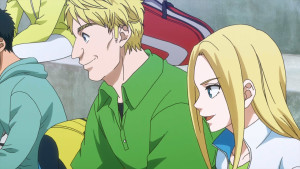 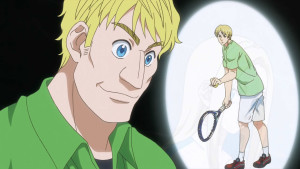 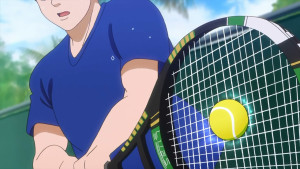 A good approach by Maruo to use this institution to improve the tennis that he himself is focusing on. He could easily rush into more power and speed and that would be helpful, but his game is more about control so if he can find a way to improve that then he’ll be in a better position going forward. Making full use of the resources at his disposal to basically continue to work on his game. Although they didn’t have too much he wasn’t already doing, they did give him more access to technology that would let him keep track of his game and continue advancing forward.

It was good to see Maruo finally figure out a way out of his losing habit. Finding something that could help get him into a steady rhythm and is something proactive. Just fixing those strings let his mindset shift and let his instinct start to regain confidence slowly but surely. It was a great big of progress since him eventually break in his match and start to gain the momentum until he finally overcame. I’m sure the rest of his stay will be a lot more interesting because now he can start winning more and gaining positive experience from those victories.

It was also good to see various perspectives here. Alex is clearly having a tough time and that’s something for Ei-chan to keep in mind. If he can go pro it will be a tough line to walk trying to climb up the world ranks and make a living out of the game. He’s already got a lot of pressure here, but there will be no lack of pressure when he officially goes pro. That is something to be prepared for. And it was also fun seeing Ike reminding Maruo that he wants to pay him back for that stolen point so he better hurry up and win already XD. 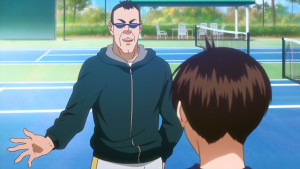 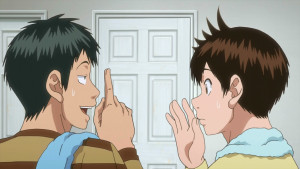 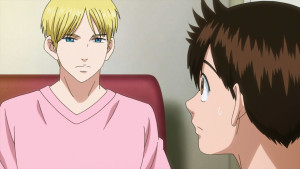 I’d like to welcome back my changes section. Again this is just where I’ll give some points on things that went differently in the manga in comparison to the anime itself. Anyone just watching the anime that doesn’t want to know how things might have gone can always feel free to bypass it.

The biggest standout was how Maruo ended up talking to his coach about his current condition. They went back to the status cards that Maruo and the other players are using each day to describe their physical and mental condition. Maruo giving a lower score on his motivation drew in attention and started the discussion while here it was just during the game. I suppose doing it that way helped fuse the scenes together so they could save time. Plus the anime is kind of ignoring the fact that Maruo and everyone else rarely have a great grasp on what each are saying at Maruo often needs Atsushi to act as translator for him. Maybe they don’t have enough VA who can speak English available to help make note of that language gap.

The language gap has been the biggest difference. The manga just making more notes of it. Such as the scene with Mike talking to Maruo about his condition, he had to tell Marcia what Maruo was talking about. It’s not like Marcia knows Japanese or anything so she couldn’t just smoothly continue into her explanation about Alex before getting a translation. It’s nothing big, but it was the standout difference here. 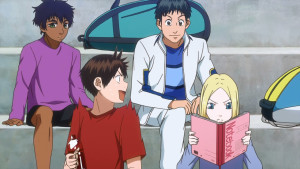 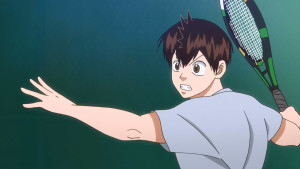 Overall it was a solid week. Maruo making good progress and having to overcome a very natural losing streak. You saw concern from Marcia and the other characters around him at the tough time he was having. But now he can focus on enjoying these practice matches and continuing to grow as a player. He’s got a tough road ahead, but he should be able to overcome it so long as he stays focused.
Score: A-