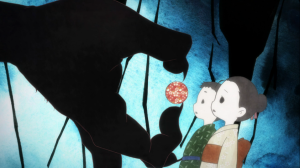 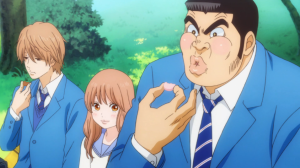 I wasn’t riding the hype train for many shows this season, but you can bet I had my ticket bought and my seat picked out for My love Story!! (Ore Monogatari). I’m a sucker for a good shoujo, and Kawahara Kazune’s (High School Debut) original manga has a lot of positive feedback behind it, including a Kodansha Best Shoujo Manga Award. Then Madhouse had to go and announce Asaka Morio (Cardcaptor Sakura, NANA, Chihayafuru) would be in the director’s chair, and my hopes went soaring into the stratosphere.

Well, now we’re one episode into the series, and I’m happy to announce that my hopes are still chillin’ happily between the clouds. Asaka’s got some charming source material here, and he knows how to bring it to life with humor, heart, and just the right amount of cuteness.

Plus it looks like Madhouse gave him an unlimited Sparkle Budget, which is always a nice plus. 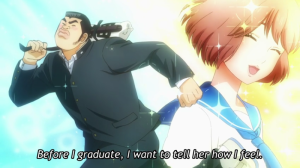 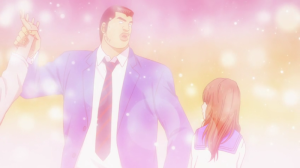 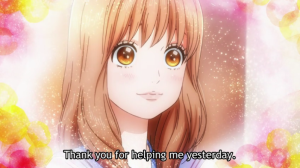 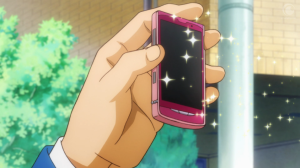 OreMono (as I’ll be calling it) begins with a gorgeously stylized fairy tale sequence about a kindhearted ogre who longs to be accepted by the local villagers, but whose size and appearance continue to frighten them away. This sets up the primary theme of the episode (“never judge a book by its cover,” basically), which follows main character Gouda Takeo (Eguchi Takuya, very busy this season), an emotional, somewhat aggressive, but ultimately warmhearted galoot with a talent for martial arts, a genuine (albeit ham-fisted) desire to help others, and a tendency to fall hard for the girls.

Unfortunately, his crushes are always confessing their love for his childhood friend and neighbor, the handsome but tactless Sunakawa “Suna” Makoto (Shimazaki Nobunaga). He’s turned down every girl who’s ever asked him out, either because he’s genuinely uninterested (slashficcers, start your engines) or because he’s the best friend in the history of ever, it’s not clear yet. And if you were wondering: Yes, the character designer (Hamada Kunihiko) also worked on Chihayafuru, which might explain why Suna looks a lot like he should stop breaking hearts and go practice his karuta swing instead. 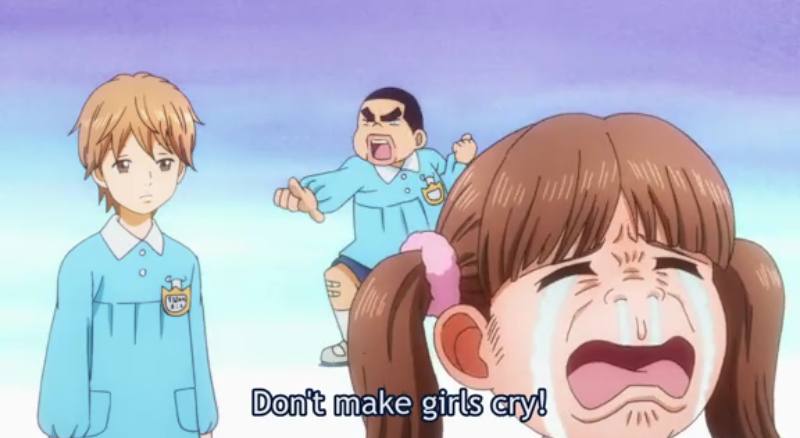 I forgot how much of a jerk Taichi was as a kid.

Our (love) story really begins when Suna points out a “sketchy” guy whom Takeo (tall enough to see over everyone else) realizes is groping a girl and rushes over to put a stop to it. This brings him crashing into the life of the girl he’s helped, introduced here as just “Yamato-san” (Han Megumi, awkwardly adorable nonstop), an amateur baker who’s a lot more open and straightforward than she looks.

In a scene peppered with landmines that the episode danced merrily around, the two bond over making sure Yamato’s assaulter gets justice. I was worried Yamato might not hold her own as a character, but (like the cakes she bakes) she’s got real layers, shy and awkward but with a streak of mettle and an ability to see past appearances. Despite her understandable fear and natural timidity, she insists on following the guys to the police and stands up for both herself and Takeo, backing up Takeo’s story and specifically naming the man as her assaulter. Then, when Mr. Asshole tries to drop some fat victim-blaming beats, Takeo drops him into a desk (not gonna lie, I cheered at that). In essence, the two defend one another and make up for the others’ weaknesses, which feels like a grand start to a relationship.

They’re clearly smitten with each other, but Takeo’s convinced that Yamato—like all the girls before her—only has eyes for Suna. And so he vows to make her happy by getting her together with his best friend. Which, one suspects, is where the rom-com shenanigans will kick off next week. 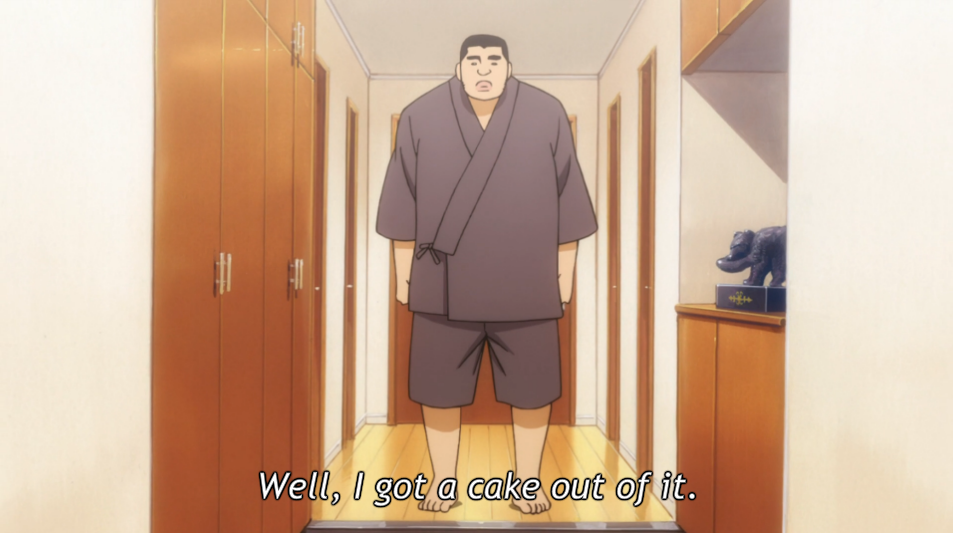 Always a good day in my book.

Beyond the heaping helpings of earnestness, humor, and charm (which it has in spades), what makes OreMono so appealing to me is that it seems like a story dedicated to doing something just a little different from the usual shoujo fare. True, there are plenty of stories about awkward or unconventionally attractive guys “getting the girl,” but most of them are written with a male target audience in mind, and OreMono is most definitely targeted at young women and girls, complete with all the shoujo stylistic trappings. What’s more, this doesn’t look like a story about either of them needing to do anything extravagant to “win” the other one over—Yamato clearly likes Takeo, and the real challenge is going to be how they overcome their individual anxieties and insecurities in order to convey those feelings to one another.

It’s rare enough to see a male protagonist in a shoujo series, but it’s unheard of to see one so thoroughly removed from the genre’s “pretty boy” image. Drawn like the stereotypical Hulking Bully Character, Takeo is the last person you’d expect to see star in a shoujo manga/anime. Which is probably why he doesn’t seem to realize this is his story, either. How OreMono chooses to handle that seeming disparity between its genre and its protagonist will go a long way in determining whether this turns into a great or merely a pretty good series. Either way, I’ll happily be here to see it play out.

Oh, and speaking of being here—hello and yoroshiku to all of you! I’m Dee, The Josei Next Door and your friendly neighborhood guest blogger. I’m crazy-excited to be covering OreMono over here at Anime Evo this season, and hopefully I can get you guys crazy-excited to watch and read about it as well.

Assuming this series doesn’t leap off a cliff in the next couple of weeks, I fully expect to be blogging it the whole way through, so get comfy, have fun with the rest of your premieres, and I’ll see you and these crazy kids again next week!