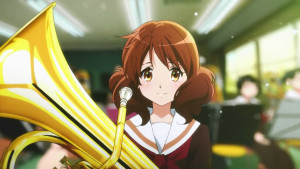 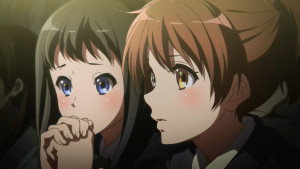 It is really nice when you are looking forward to a show and it lives up to expectations. That is the case for me and Hibike! Euphonium. I was really hoping this show was going to turn out well. Full bias involved with me having played the Euphonium in a school band so I was just hoping this show would turn out to be really good for that reason alone. The show did what it should in setting the stage for the story and giving us enough of the characters to leave an impression.

Really this has much more of a story than I might have expected. It could have been very simple in just having a bunch of people joining a small band and not do too much with it. But they set up the backstory for the main character nicely and even gave a kind of goal for the group to aim towards. I could see myself having a lot of fun seeing the main cast interact, but also grow as musicians and work towards transforming the school band from just something that’s a little below average into something really spectacular. 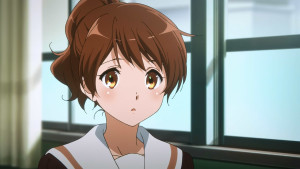 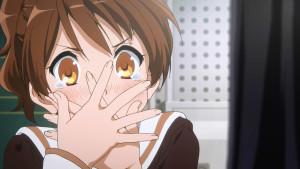 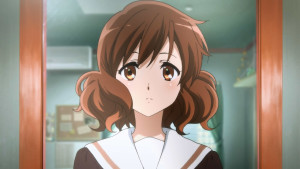 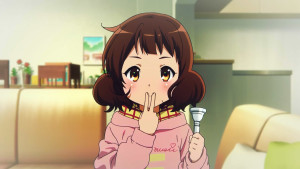 Kumiko I think is a good lead for the show. She isn’t a super hyper character and she isn’t too dark either. She just feels like a pretty regular person who’s had some tough experiences in her musical background and is trying to find her way. I found her reactions in the flashbacks interesting. I think on a certain level she was disappointed, but she was also happy with how they ended up. Perhaps because she knew that their skill level was just not high enough. That realistic grounding left her reaction much more muted than Kousaka who wanted so much more and was truly frustrated by the result. For her getting anywhere but first place was a total and complete failure.

For that reason I could understand Kumiko being very on the fence about the band. How that ended really left an impact on her. Kumiko just ripping into her for her blurted out thoughts hit hard. You can somewhat figure out why she came to that school in the first place being to get away from the band. Maybe on a certain level she felt her own limitations and was frustrated enough to in a sense run away from it. Seeing Kousaka there had to really shake her up, probably feeling greatly embarrassed to be in a band room with her again after things ended like that for them. 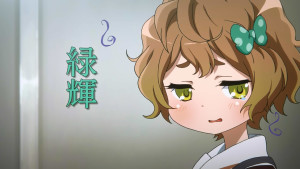 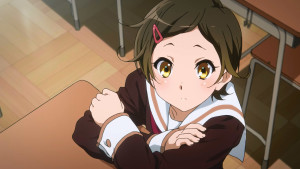 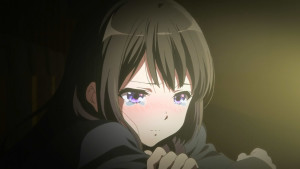 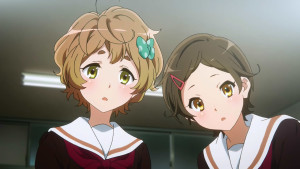 It does leave me curious why the heck Kousaka is in that school in the first place. Did she just want to raise a mediocre band from the ruins into a champion? Does she have family reasons why she couldn’t go to a school that had a much better musical reputation? It’s a curious thing since you can tell just from the short scenes with her that she is very focused and passionate about music. The first thing she did was go there and outright join the band, not even thinking twice about it once she got there. I can’t wait to see her next interaction with Kumiko since anything could happen there, though you expect a more classic angry response to seeing her again.

The other girls of the main quartet are nice enough. My condolences to poor Midori/Sapphire, I can’t imagine being named something like that and going through school that way. I can completely understand her wanting to be called something else by people so she doesn’t have to deal with that. Not too much of an impression for her so far outside of her having a very cute idea of music and how she perceives it.

Hazuki is definitely the classic genki character. Just going up to Kumiko and deciding to become her friend out of the blue. Also being so energized that she went to buy a mouthpiece without considering what she wanted to play or even what the mouthpiece she got was for. Of course the OP gives away that she’ll play the tuba, but you could see that it was a tuba mouthpiece anyways. You kind of had to smile at her being so excited about just making noise with the mouthpiece. Seems like she’ll be a fun character to have along for the ride. 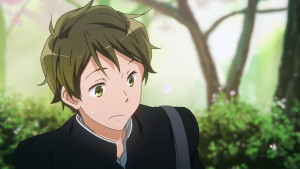 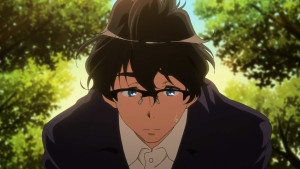 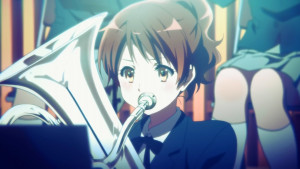 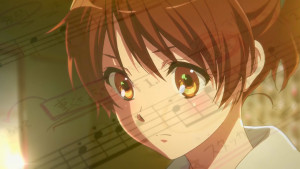 There wasn’t much to say about the male cast so far. The childhood friend seems rather normal though good job by him torpedoing his chances with the whole “don’t talk to me ugly” line from their previous school year XD. The teacher who I expect will be the conductor seems like an interesting guy. A bit strange, but definitely has strong feelings for music. I think having the right conductor will do wonders for that band. You need the right person leading and able to help the musicians develop their skills.

I just have to say visually this show really is something else. You know KyoAni are going to bring their A game to just about everything they do and this is another really nice looking show. The characters look good, the environment looks good, the instruments look good XD.

You almost have to comment on sound with a show like this XD. I did like them just outright playing “Orpheus in the Underworld.” I think a fun part of the show will be hearing different classical pieces which is music that really doesn’t get that much attention. It’s not gone or anything, but what’s popular to the vast majority is just different kinds of music. 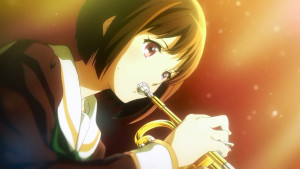 I actually quite liked the OP for this series. The standard of introducing the main cast visually with their instrument was a solid move. But the song I felt built up really nicely towards the chorus that I really enjoyed. It had a lot of energy and punch to it which I’m always for when it comes to an OP. Plus I liked how they represented the people playing during the OP and really the episode. You can see the characters focusing on their sheet music, focusing on the conductor and playing their instrument while trying to catch a breath where they can. Really I just enjoyed the energy of the song and the strong visuals leaving it a really good OP as far as I was concerned. 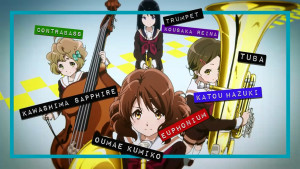 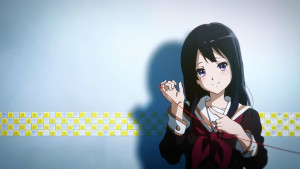 The ED didn’t blow me away, but that was alright. It also had some good energy to it which kind of works for this show. Starting with energy and then ending with it XD. It looked nice and I liked the little red string of fate they threw in there at the end XD. The song itself was nice enough and after listening to it a few times I think it was a good choice. It isn’t an ED that left a huge impression on me, but it wasn’t a bad one. 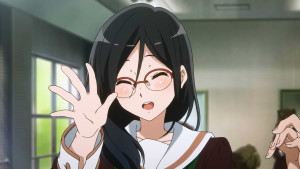 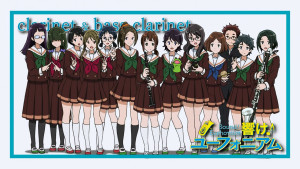 I’m not sure if I’ll be covering this show full time though my nostalgia for music does leave me considering it. This is a show I’ll definitely be watching regardless though. It has a good visual strength to it, the characters aren’t bad, and it may just have a better story than I had expected going into it. That kind of combination seems worth watching for. At the very least I’ll enjoy seeing brass instruments (along with others) being so nicely animated XD.
Score: A